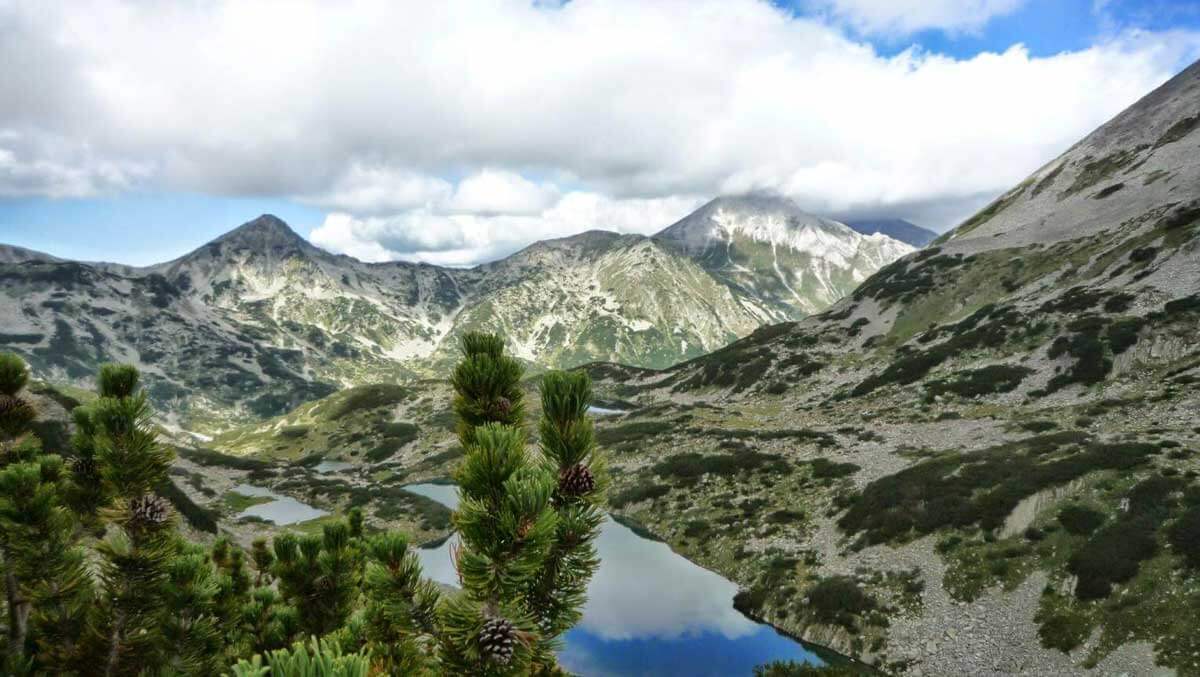 Bansko is famous as an excellent ski destination and an international resort offering a variety of options for relaxing holidays and winter funfor everyone, for both children and adults. The resort has increased its popularity in recent years as a relatively inexpensive European ski destination that offers ski tracks for both beginner skiers as well as advanced and professional skiers.

Bansko has earned its fame of a preferred ski destination. When talking about the level of snow conditions and difficulty levels of the ski tracks, Bansko can safely be ranked among the famous European ski resorts, such as Lenzerheide, for example.

Various entertainment options can be found both in the city  and in the mountains and the surrounding areas. Bansko attracts thousands of tourists from all over the world and is also preferred because of its favorable location (160 km south of Sofia).

Thanks to the European investment funds absorbed by the resort, the winter resortis proud of its well-built infrastructure, well-organized transport and urban road network, as well as well-maintained ski tracksas well as clear markings and guides for tourists.

If you have already been to Bansko, you must already be convinced that it is one of these resorts where you can always see something new. Bansko’s program is never empty and all year round the visitors of the resort can enjoy various prestigious competitions in alpine skiing disciplines, international festivals, concerts as well as ethno festivals presenting local unique traditions. 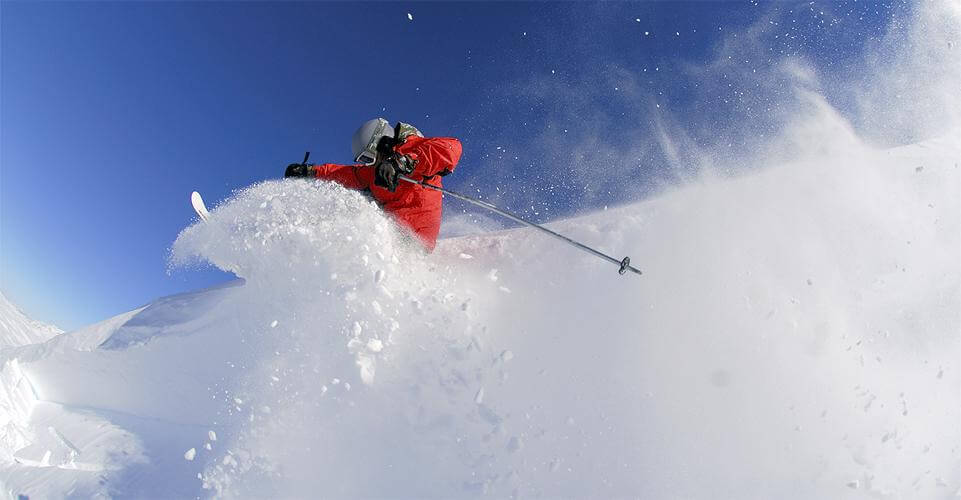 The mountain resort also offers a rich variety of nightclubs such as clubs, bars, casinos, gaming halls and restaurants, taverns offering a unique setting and delicious cuisine for all gastronomic travelers.

Bansko is famous for its excellent ski tracks and options for winter adventures in the mountains. But what do we do during the other seasons in Bansko? The picturesque mountain resort also offers wonderful destinations for summer mountain tourism.

Chalin valog,for example, is a wonderful place for picnics. In addition to hiking and excursions to various localities, the surroundings of Bansko offer a variety of natural, cultural and archeological sights which are famous and unique not only for the Balkans, but also for Europe.

The resort can offer a lot when it comes to natural landmarks and especially picturesque waterfalls. The Pirin National Park is located to the south of Bansko which is included in the list of reserves and national parks of the United Nations and the natural and cultural landmarks of UNESCO.

Pirin park combines a wealth of magnificent lakes, rivers, centuries-old trees and landscapes, caves and waterfallsthat leave an unforgettable memory to everyone who has visited them. Anyone who likes waterfalls or just wants to enjoy the beautiful and picturesque mountain scenery of Bansko’s surroundings should not miss this great experience.

Which are the most famous waterfalls in Bansko? 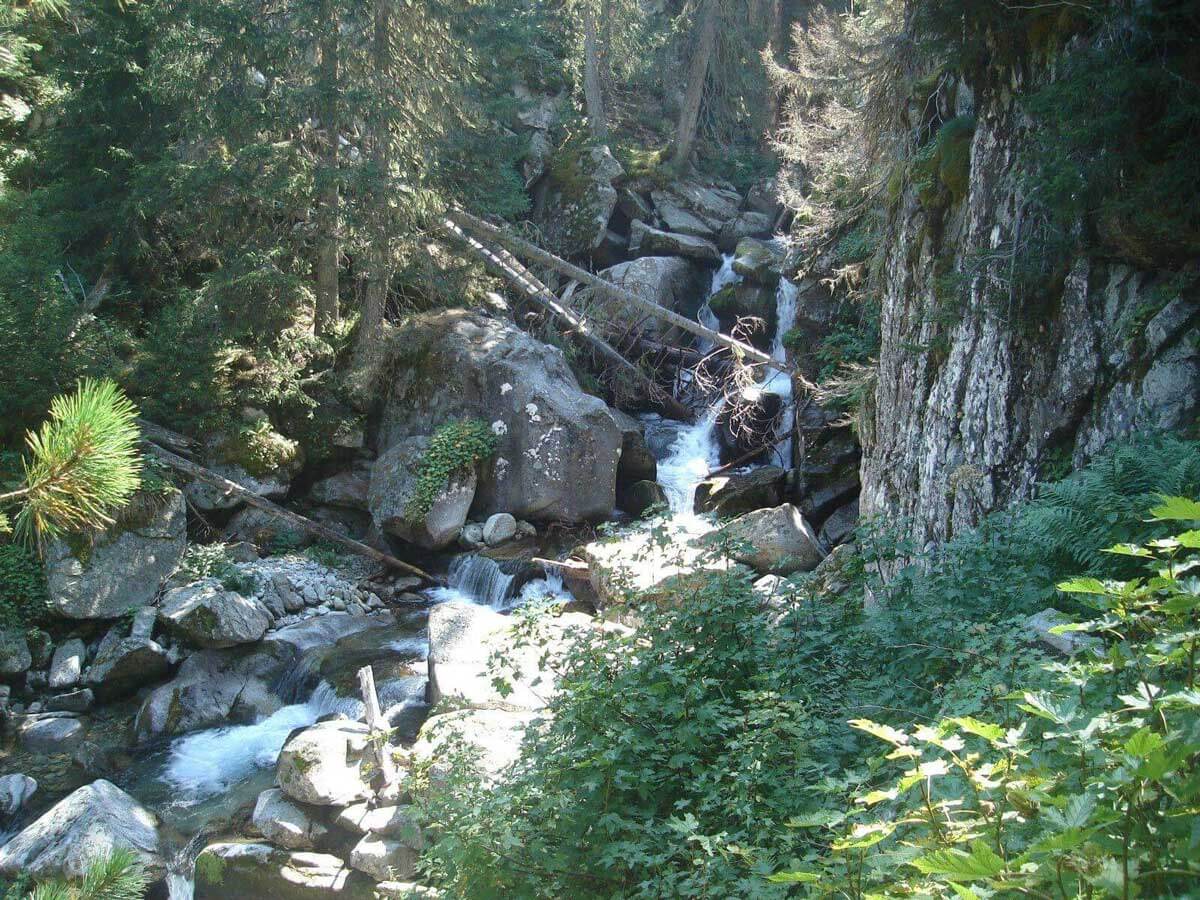 This waterfall is located next to Damyanitsa river. It is 11 meters high and is located at 1,750 meters above sea level to the east of the lower transverse valley threshold of the river, which forms the northern boundary of the Demyanitsa locality.

For the first time the area around it was declared a natural landmark in 1965 and its area is protected. At 3 km from it is located the waterfall Yulenski skok. Near the Demyanishki skok is located the forest road of Bansko to the Demyanitsa mountain hostel.

A curious fact is that there is an evorsion pothole in the foothills. Although Damyanitsa river is only 14 km long, it collects the waters of six lake groups – Valyavishki, Vasilyashki, Gazeyski, Karkamsky, Tipitsky, Prevalski. It flows at an altitude of 2,400 m and finally merges with river Banderitsa near Bansko, after which both form the Glazne river. 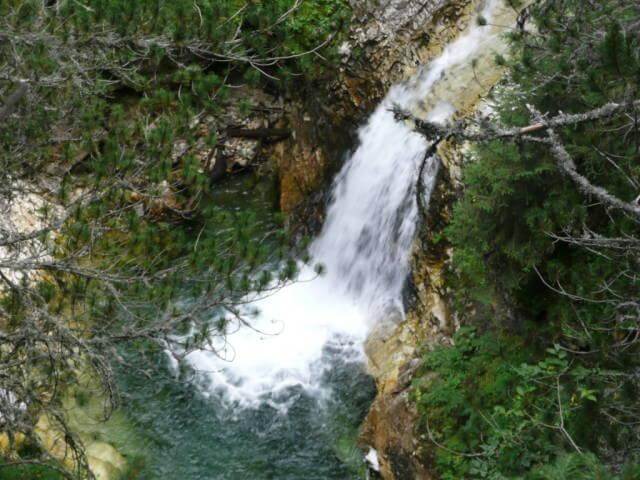 It is one of the largest waterfalls formed along the river bed of Banderitsa with its height of 30 m. It was declared a natural landmark in 1965. The Banderishki skokis located in the Banderitsa canyon near Banderitsa mountain houseand its height is 1,700 m. It originates at the rock slope at Donchovi karauli.

The Banderishki canyon is characterized by a 2 km-long steep and rocky terrain. The river continues its path underground at the foot of Mount Kutelo in the northern part of Banderishka polyana where the Banderitsa mountain hostel is located.

The valley of the Banderitsa river is deep and narrow (reaching a depth of 30 m) and this presents a difficulty in descending down to the waterfall. Its water supplies power to the small HPP near Vihren mountain hostel. The area around the waterfall has an areaof 0.4 and there is an abundance of white, black fir, white pine and other species. 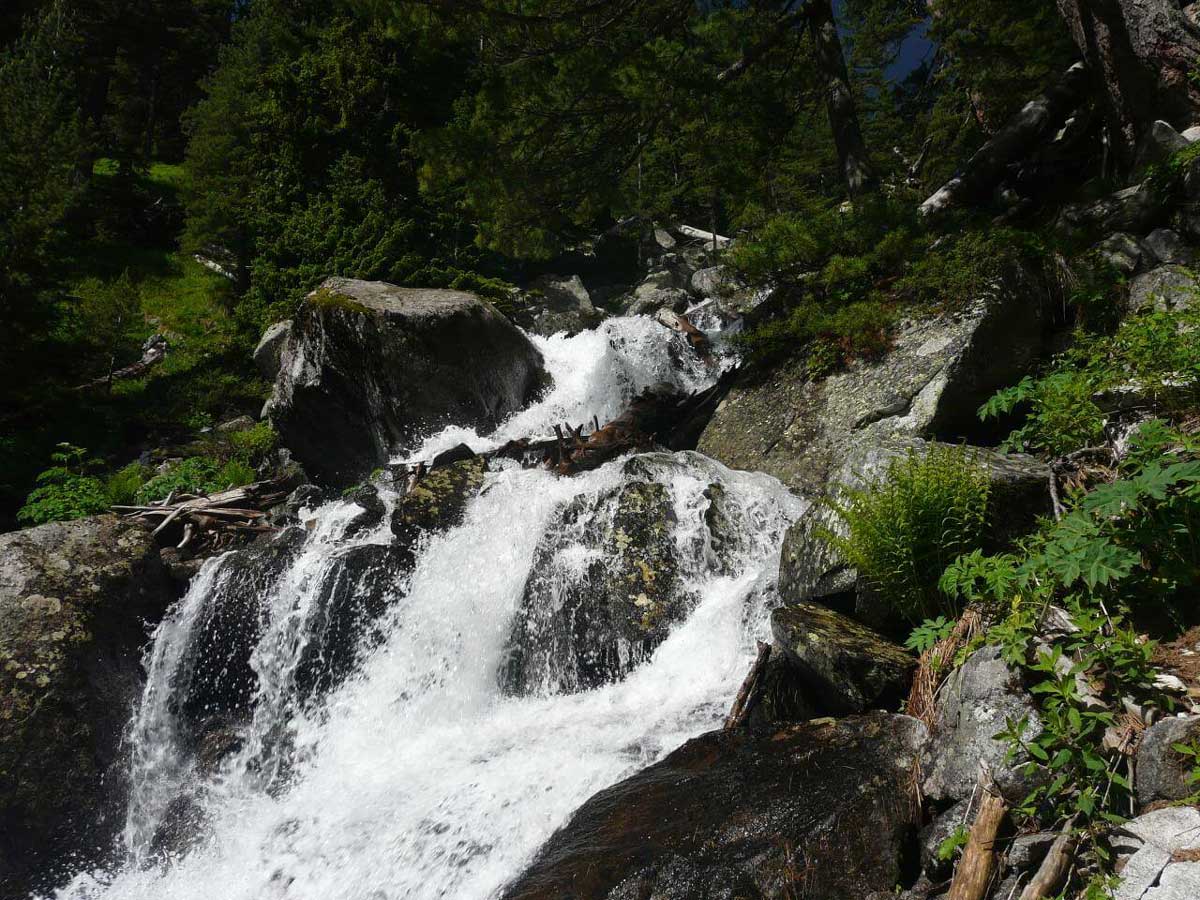 In spite of its beauty, the waterfall is in a steep place and we need to be cautious when going downstairs. The waterfall descends along the stone thresholds that bar the riverbed at its foot, just as with the Demyanishki waterfall, there is a deep erosion pothole(like a rock cauldron) formed by the force of the falling water. Above the Damyanitsa river there is a site, from which the waterfall can be observed. It can be reached by going from Bansko to the Damyanitsa mountain hostel or to the south of the Todorova ornitsa area. 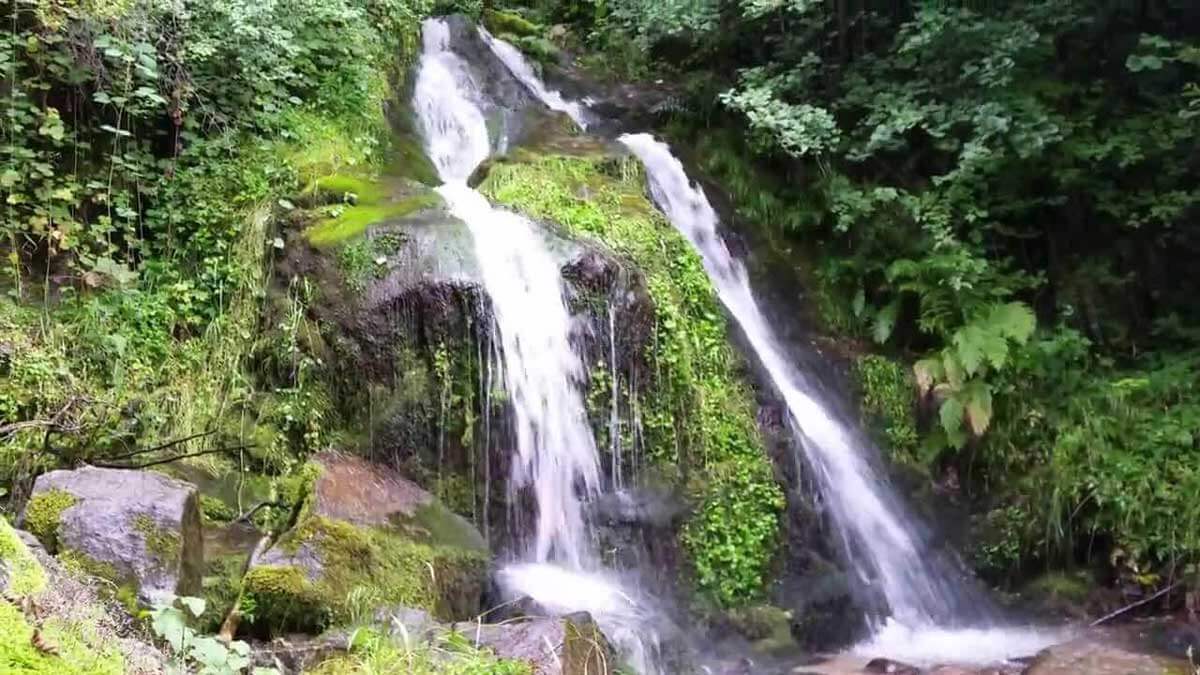 This waterfall is situated next to the small dirt road between Bansko and Dobrinishte which is only 8 km away in the eastern part of Pirin. It is close to two landmarks attracting tourists year-round – the Nameless town and the localizty of St. Nikola.

Named after this area, the waterfall is located right at the steep rocks of the St. Nikola areaand to reach it you need to go through a 7 m-high narrow and beaten path. Its lowest point of fall is no more than 5-6 m. The terrain around the waterfall allows us to safely get down to it. At its foot there is a pond formed. Two of its several cascades can even be seen at the foot of the Nameless town. If you did not know, this town was quite accidentally discovered during the construction of the St. Nikola chapel in 2003. 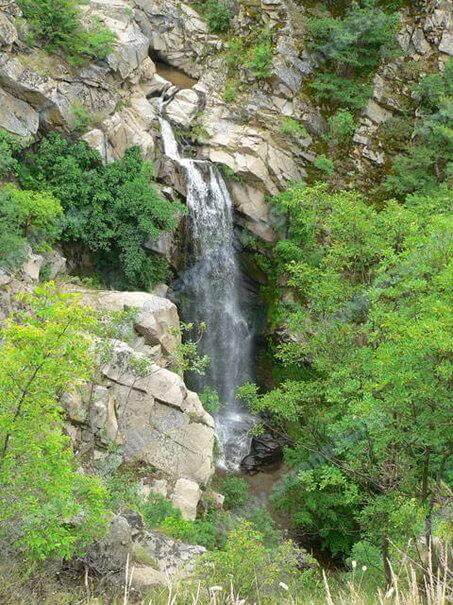 The Skakaloto waterfall, also known as Vlahinski waterfall, is one of the waterfalls that are farther fromthe Bansko region. It is situated at an altitude of 550 m, only 15 minutes or 9 km away from the village of Vlahi which is located at a distance of 8 km from the town of Kresna.

The village of Vlahi is the place where the waterfall is located and it is only accessible through the town of Kresna. It is situated in a rocky area with beautiful greenery. It is located in the lower flow of the Kosovska river, which is a right feeder of the Vlahinska river.

The river bed is enclosed by a rocky border and there a picturesque 20-25 meter-high waterfall forms which crashes at the bottom into a small rock and forms a small lake. At its foot, the stream of water formed a small evorsion pothole.

Reaching the waterfall itself is difficult as well as the way down to it and offers an extreme experience but it is completely worthwhile because the view from below to the waterfall is amazing.

The waterfall is full of water all year round and you can try doing canyoning– a type of sport that consists in going down a rope from the top of the waterfall to its foot below the water jet.  The Skakalato waterfallcan be reached by going from the Church of St. Prophet Iliyatowards the Vlahinska river. 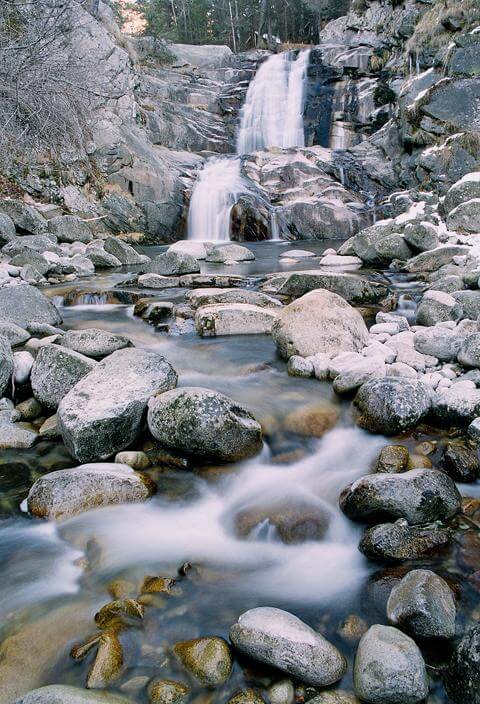 This waterfall which is recognized as a natural landmark, is located in Popina Laka locality in the North of Pirin, 18 km from the town of Sandanski. The waterfall is formed in the course of the Bashliytsa river about 100 m from the place where it merges with the Sarchaliytsa river and the Sandanska Bistritsa river is born.

Its location is 1,230 meters above sea level and its height is 12 meters. The waterfall forms two lower waterfalls and is full of water throughout the year. Very close to it is the Yane Sandanski mountain house which is the lowest located mountain hostel in the Pirin mountain, as well as the resort villageTurichka church.

The waterfall is located near the Popina Laka summer-house village. It was declared a natural landmark in 1965. Popina Laka is characterized by spacious green meadows and clear streams and provides perfect conditions for hiking and mountain biking.

The proximity of the Sandanska Bistritsa River provides good conditions for fishing. The site is also full of age-old coniferous forests among which deciduous species can be found due to the extremely clean air in the area.

Come to Banskoand experience an exciting encounter with the wonderful and inspiring nature of Pirin. The rich nature of the region impresses every tourist and is a guarantee for unforgettable pleasant moments.