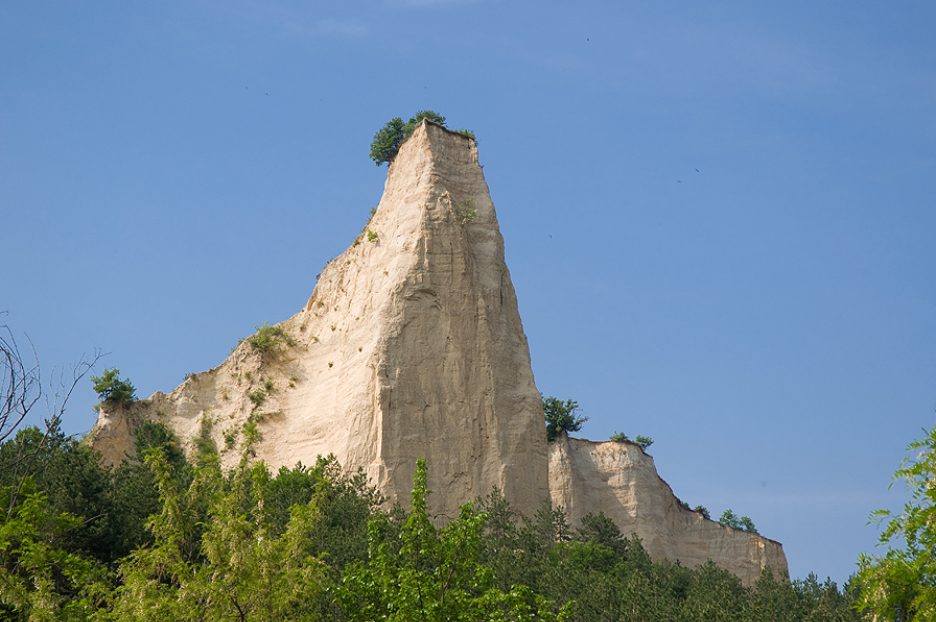 If you love traveling to beautiful natural landmarks, then the natural landmarks in the Sandanski region will be interesting to you. One of them are the majestic and unique The Karlanovo earth Pyramids, which are part of the rock complex of the Melnik pyramids – located in the village of Karlanovo, part of Sandanski municipality.

They are one of the places in Sandanski district that is really worth seeing. Although not known as the Melnik Pyramids, the Karlanov Pyramids are also impressive and not inferior in beauty to the previous ones. 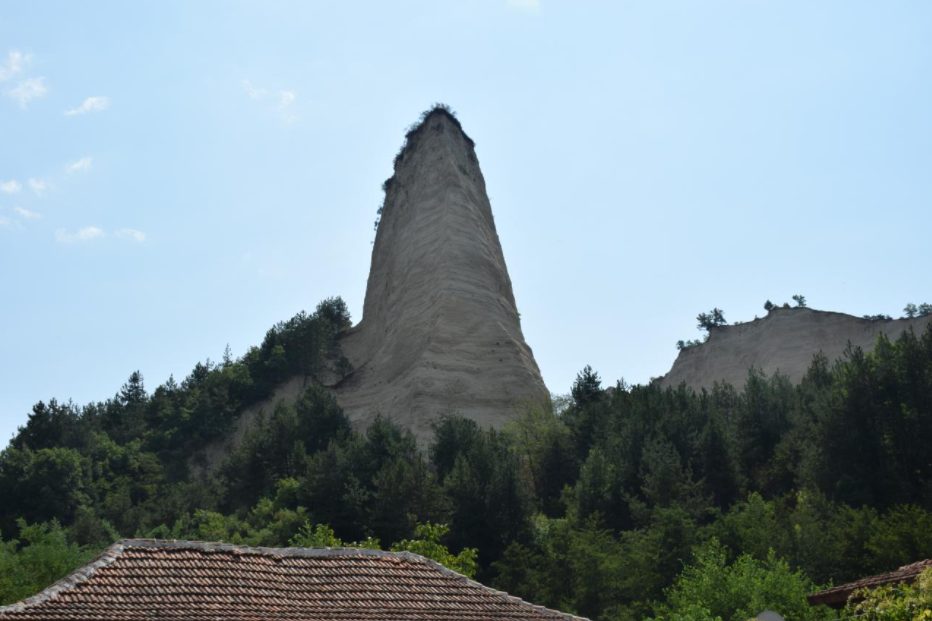 Viewed from the village of Karlanovo, the pyramids offer a breathtaking view and are defined as a miracle of the nature. Imaginative tourists liken them to various things, such as the bows of ships or the tall fortifications of castles with green domes.

They were declared as a natural landmark in 1960 and since then have continued to be an attraction for tourists from all around the world.

Actually, the Kerlanovo Pyramids are not a separate rock formation. Together with the Melnik and Rozhen pyramids, they form a whole rock complex. According to the settlements the rock formations are divided into Melnik, Rozhen and Karlanovo pyramids. 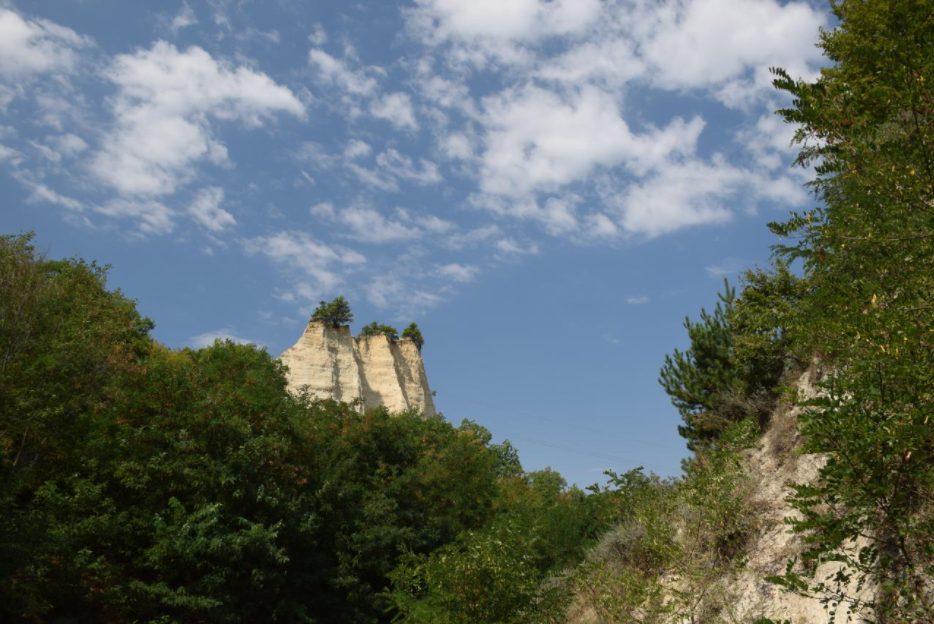 In appearance, the Karlanovo pyramids resemble huge sand towers, some of which are up to 100 meters high . They are also covered with grass.

Although they are part of the Rozhen and Melnik pyramids, the Karlanovo pyramids are different in size and structure. They are built of sedimentary rocks and are characterized by steep and vertical slopes. They were formed as a result of erosion processes.

The process of formation of the Karlanovo pyramids resembles that of the pyramids near the village of Stob and the village of Katina. They consist of a thick layer of sand that contains a mixture of stone pieces and clay

There are two hypotheses about how the thick sand layer of the Karlanovo Pyramids was formed. It may have formed as a result of landslides from the nearby mountains due to glacial activity that affected the region in ancient times, or it may have been the result of the deposition of sand at the bottom of an ancient lake.

The erosive effect of water also plays a role in its formation. As a result of precipitation and snowmelt in the past, rivers and small streams have formed and passed through the layer of the sandy layer. 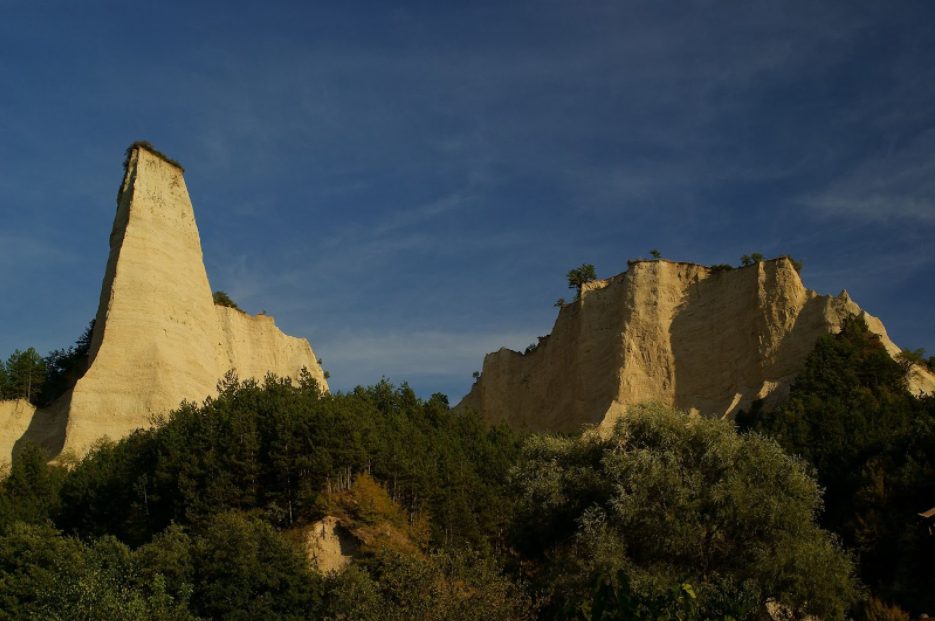 Because this mixture is easy to be destroyed, water erosion has led to the formation of interesting shapes, pyramidal rock formations, towering thin peaks, and varying depths of ditches that wind between the individual rock formations.

How to get to the Kerlanovo Pyramids?

The small village is located just a few kilometers from the town of Melnik, which is a starting point for visitors of the Karlanovo pyramids. Melnik is located 90 km. from Blagoevgrad and 20 km. from Sandanski.

The pyramids themselves can be reached by bus or car, as well as by train to the nearest Damyanitsa railway station.

If you take the direct road to the Rozhen Monastery, you will see signs pointing to the Karlanovo Pyramids.

On this trail you can also see a panoramic view of some of the slopes of Pirin and Slavyanka. There are observation decks and separate places for recreation on this road.

It is recommended for anyone who would like to take a walk on this panoramic route to get good hiking boots, as there are a lot of crumbly rocks on the terrain, which creates a risk of falling.

Spring and autumn are the best seasons to visit the Karlanovo Pyramids. Municipality of Sandanski is rich of sights. That’s why we will introduce you some of them, so we advise you to keep reading.

Landmarks near the Karlanovo pyramids 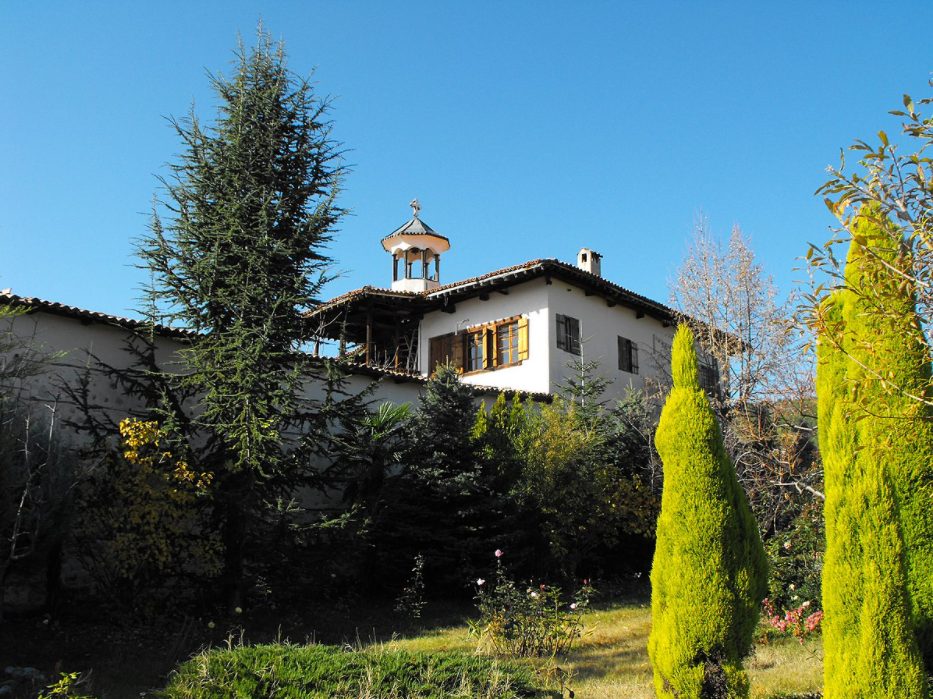 Rozhen Monastery “Holy Nativity of the Mother of God”

The medieval Rozhen Monastery, located just a kilometer from the village of Rozhen in the southwestern part of Pirin, is one of the most beautiful places in the municipality of Sandanski that are worth visiting. It is the largest monastery in Pirin Macedonia.

Not much is known about the establishment of the Rozhen Monastery. It was first mentioned in a file of a Greek manuscript dating from the 13th century, and for the second time it appears as a name in a manuscript of Abbot Cosmas from 1551. 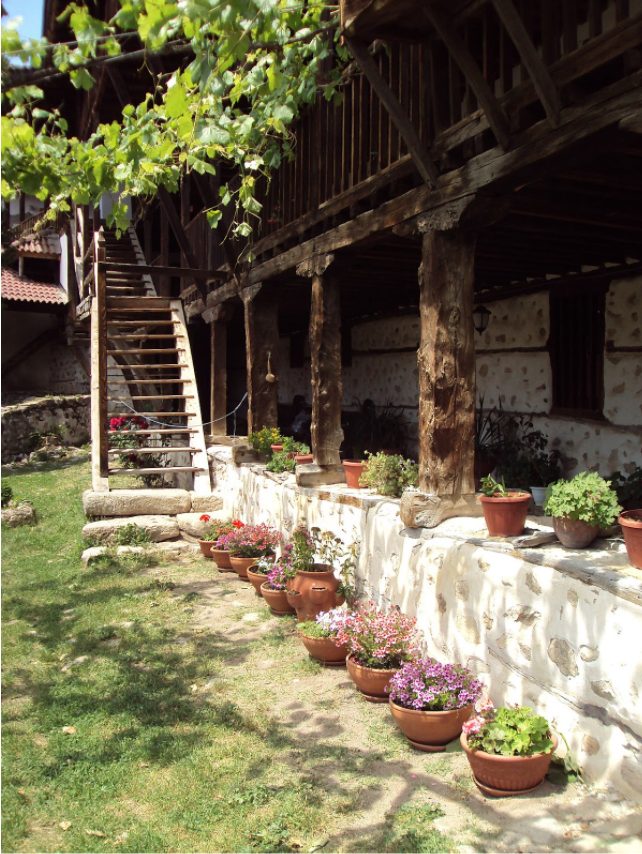 As a result of the invasion of the Ottoman Empire on Bulgarian lands, the monastery was burned down, but then in the 18th century it has been fully restored. During the period of Ottoman Majesty, the Rozhen Monastery was under the rule of the Greek Church and that is why a convent of the Iberian Mount Athos Monastery was built.

In the 19th century the monastery grew its influence in the region as a spiritual center. At that time, many lands in the vicinity were his property. 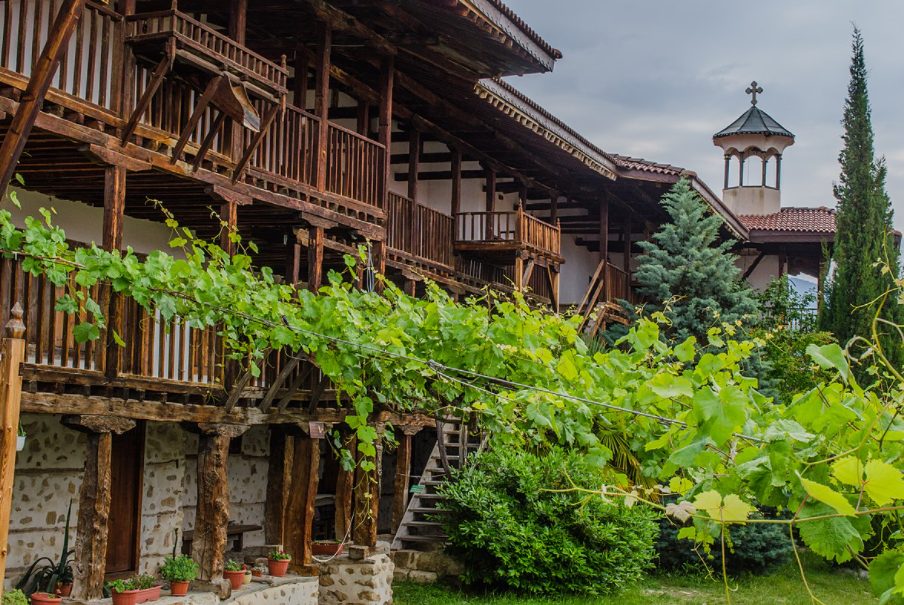 Before the monastery was stavropegial, meanwhile today it is under the influence of the Diocese of Nevrokop. Currently, the monastery is open for visits throughout the year. 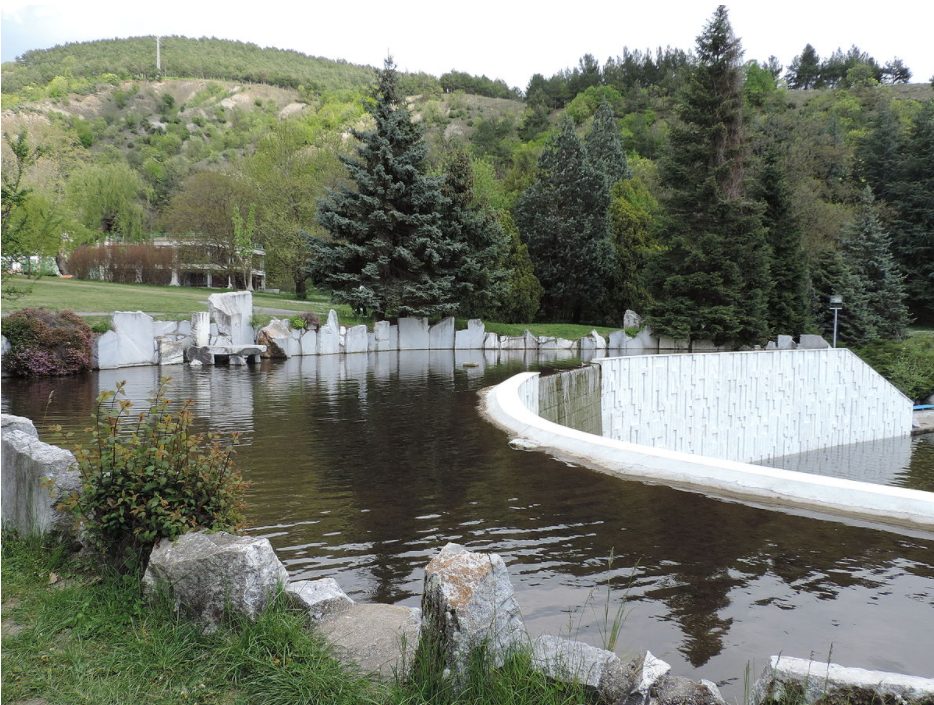 If you love nature parks and you are in the area of Sandanski, make sure you’ll have some time to visit the city park “St. Vrach”. There you can see over 200 plant species from the Mediterranean, of which tree species such as ancient plane trees, redwoods, willows, conifers, cedars, as well as magnolia, ginkgo biloba and pomegranate. 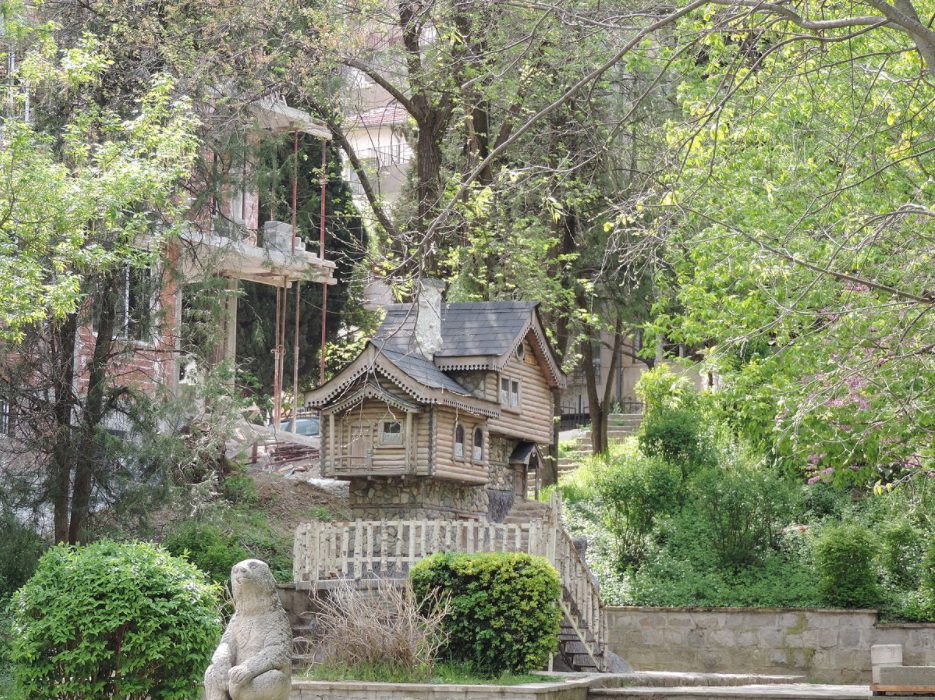 In the park there is a large artificial lake where you can ride a water bike, as well as a large number of small pools.

Since 1980 the park is named after the old name of the town of Sandanski. It was founded by a general Georgi Todorov, who together with his military regiment planted black and white pine, as well as Italian cedar and sophora, on the territory of the park.

The park also has: 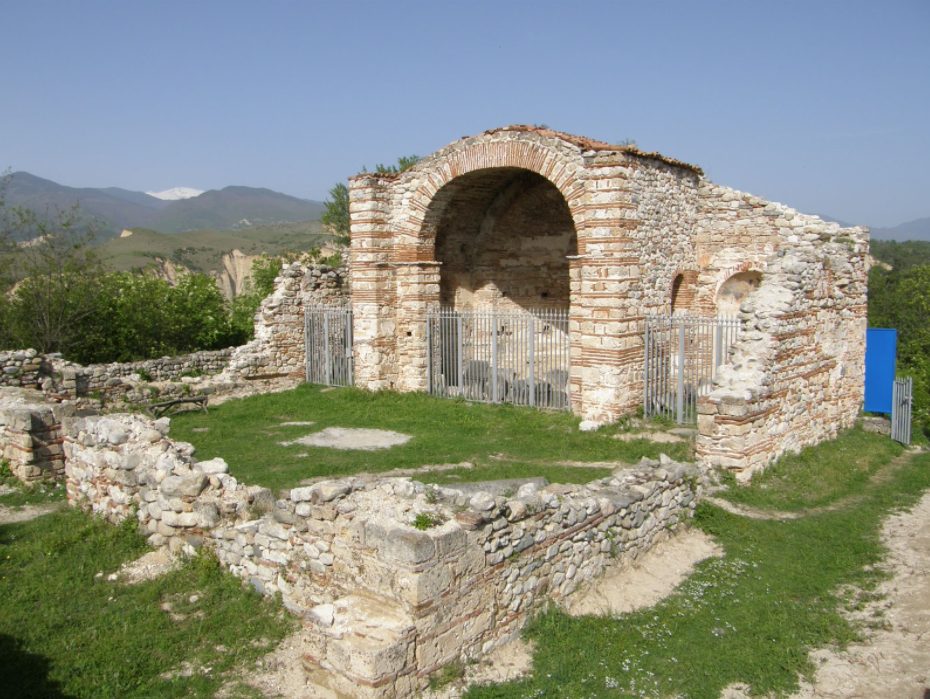 The plateau “St. Nicholas” is one of the most popular places in Melnik, which is worth visiting by fans of nature hikes.

The starting point for the road to the plateau is the Wine Museum, located on the main street in the town of Melnik. The cobbled path to the plateau passes through a wooded area and gradually transforms into a forest path, with beautiful views of the towering Melnik pyramids.

According to historical sources, the Basilica of St. Nicholas was built on a Thracian sanctuary of the goddess Artemis-Bendida. After the Christian religion was established in the lands of the Melnik pyramids, the inhabitants destroyed the Thracian sanctuary and built a Christian basilica in its place.

Over the centuries, the basilica has been destroyed several times and then rebuilt. Currently, parts of the walls, columns and stairs of the basilica have been preserved, and most of the frescoes of the church are exhibited in the National History Museum.

Those of you who are interested in history and archeology should definitely not miss to visit the Archaeological Museum of Sandanski. It dates back to 1936 and was built directly on the foundations of Bishop Johan’s Basilica.

An interesting fact about the museum is that it is one of the five Bulgarian archeological museums that specialize in ancient archeology. In it you can see the largest in the country Roman tomb marble sculpture dating from the period between II and III century. The total number of museum exhibits is 11,367.