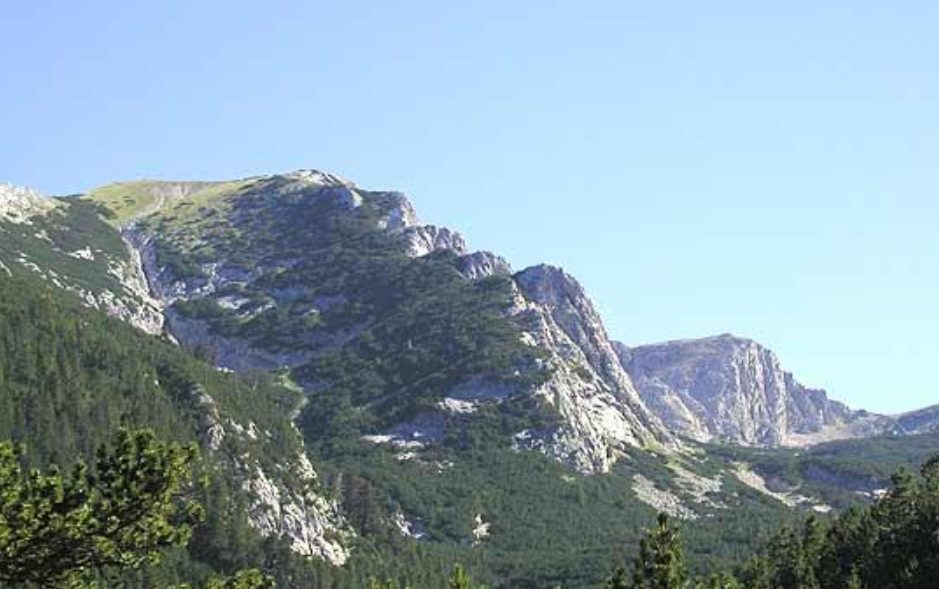 High peaks, endless forests, deep lakes, lush rivers and beautiful waterfalls – all this natural beauty awaits you to enjoy if you visit the region of Razlog and Bansko.

You will not be surprised if we tell you that in this area is one of the most bizarre and beautiful natural phenomena , we want to introduce you to now.

The Steps or the Events is one of the most amazing natural phenomena in Bulgaria . It is located in the Northern Pirin and stretches along the “rib”, which descends from Kamenititsa peak to the Razlog valley. The whole massif falls into the nature reserve Bayuvi Dupki – Djindjiritsa.

It is called the Steps because it consists of seven consecutive, protruding marble ridges , which are arranged one below the other and have the shape of a ladder. 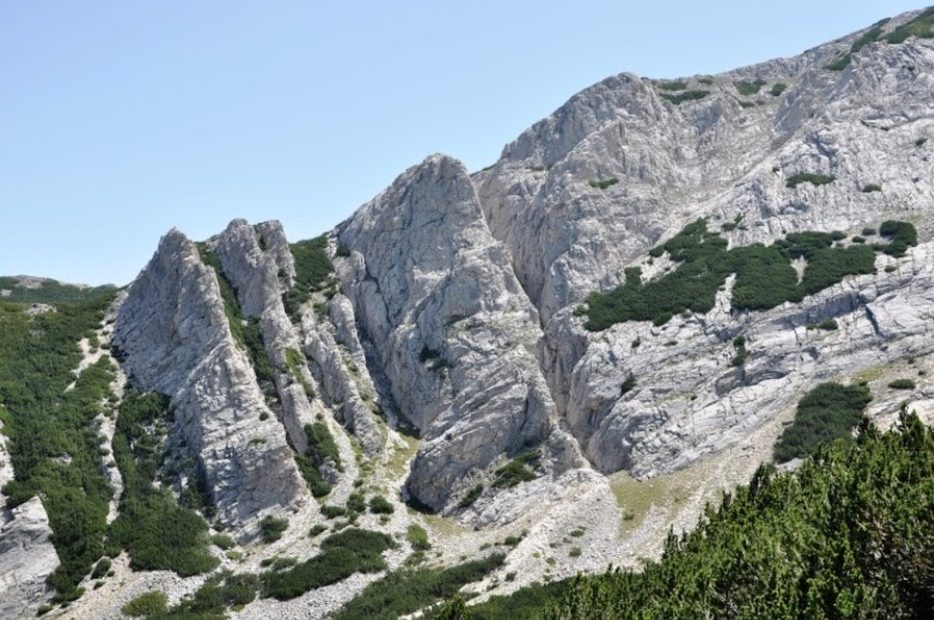 The rock is grainy and although it is crumbly in places and has unstable blocks, it offers quite good traction for climbing compared to most alpine sites in Pirin built of marble.

The routes that can reach the seven stages of the phenomenon are 14 , with a maximum of four in total стъ 3.

Due to their alpine nature, the routes taken by the natural phenomenon are of the second and third category.

The approach or starting point for the rock phenomenon Steps is Yavorov hut. 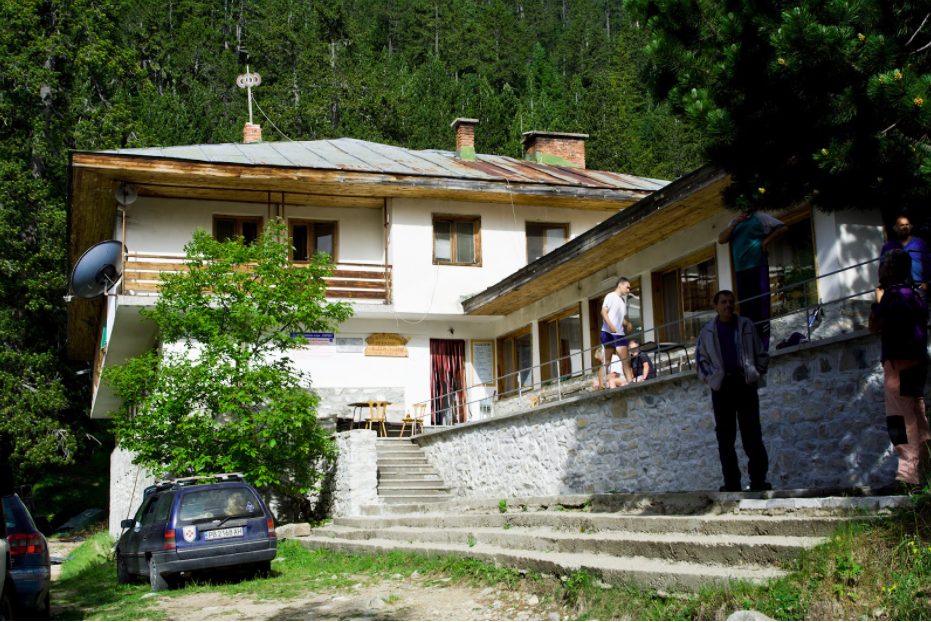 From there, in the direction of the central ridge goes path marked in yellow. The trail passes through a wooded area and leads to a vast meadow, from which you can see the whole massif with all its steps. ( From the Yavorov hut itself) the steps that are visible are only 5 ).

From the meadow the marked path continues to the left towards the base of the rock massif . It passes through a catchment and a small river, continues along the moraine and after 30 meters of climbing it leads to an even smaller and narrower path.

The path passes through a squat, enters the second moraine and after a little more climbing you reach the base of the Second Step.

Another famous route starts from the northwestern part of Kamenitica peak. From there, experienced alpine climbers can choose one of three routes that descend to the phenomenon.

The north-western wall is lower than the northern side of Vihren peak , but it is more difficult to overcome purely technically, because the rock on which the climb is performed is much more crumbly and the marble has eroded. 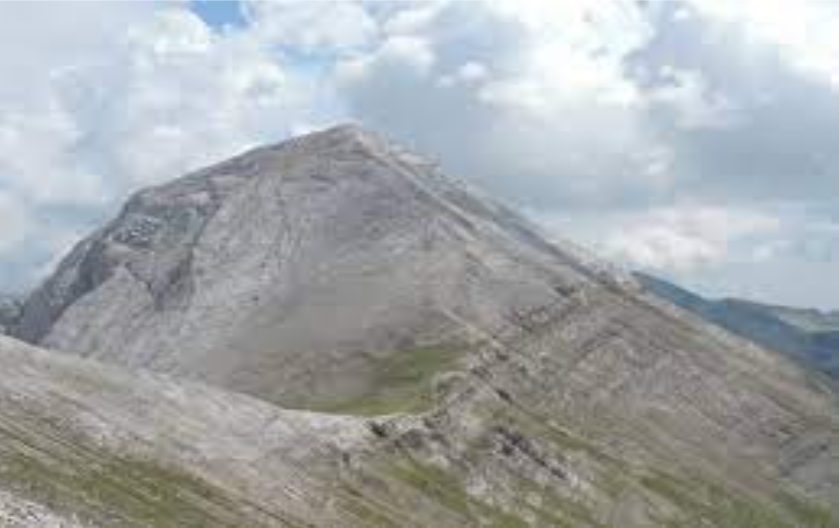 Other alpine climbing routes nearby

Climbing Kamenitica Peak is a real challenge for alpine climbers . This is the peak from which the edge descends, on which is the rock phenomenon Steps (Razlog).

The approach to Kamenititsa starts from Yavorov hut and coincides with it until the Second Step. After reaching the Second Step, turn right and continue to the Seventh Step, from the base of which the ascent to the top begins. 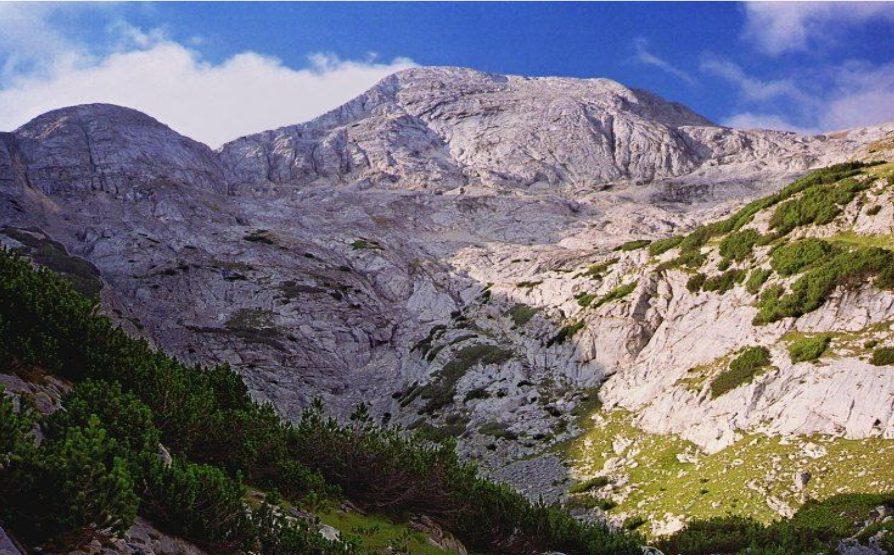 Razlozhki Peak Suhodol is with location the Karst ridge of Northern Pirin. Its wall is made of marble, but it is eroded and crumbly, which makes climbing especially quite dangerous in winter.

The approaches to the top are again from Yavorov hut and in order to climb the top the time it takes is about 2 hours.

If we have to be completely honest, then we will share that the winter climbs on Razlozhki Suhodol peak are one of the most difficult and dangerous in Bulgaria. Therefore, it is recommended to climb this peak only by many experienced and well-trained climbers. 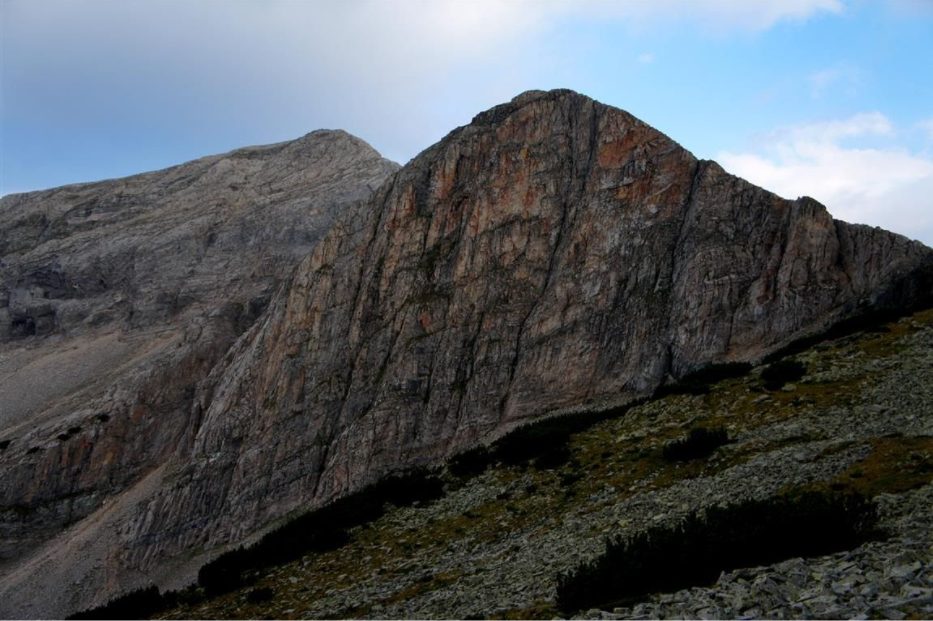 Bayuvi Dupki is located on the Karst ridge of Pirin . On one side, a steep, sharp edge connects it with Razlozhki Suhodol peak, and in the opposite direction, in close proximity, there is the Koncheto shelter.

The ascent starts from Yavorov hut. From there follow the trail in red markings, which is part of the International Tourist Route E – 4. Initially, the trail runs in the woods, then it passes through rocky terrain.

Then the route passes through the gutter between the rock phenomenon Sobitsite and Okadensky rid . Shortly before the big climb there is a shelter where you can save water.

After the shelter, less than 500 meters out on the ridge, where the red marking must be followed again. The trail runs along the Karst edge, cuts through the Razlozhki Suhodol peak and exits at a place where it meets the trail that passes through the Bayuvi Dupki circus.

There isn’t much left from here to the top, but the terrain is very steep and difficult to overcome. 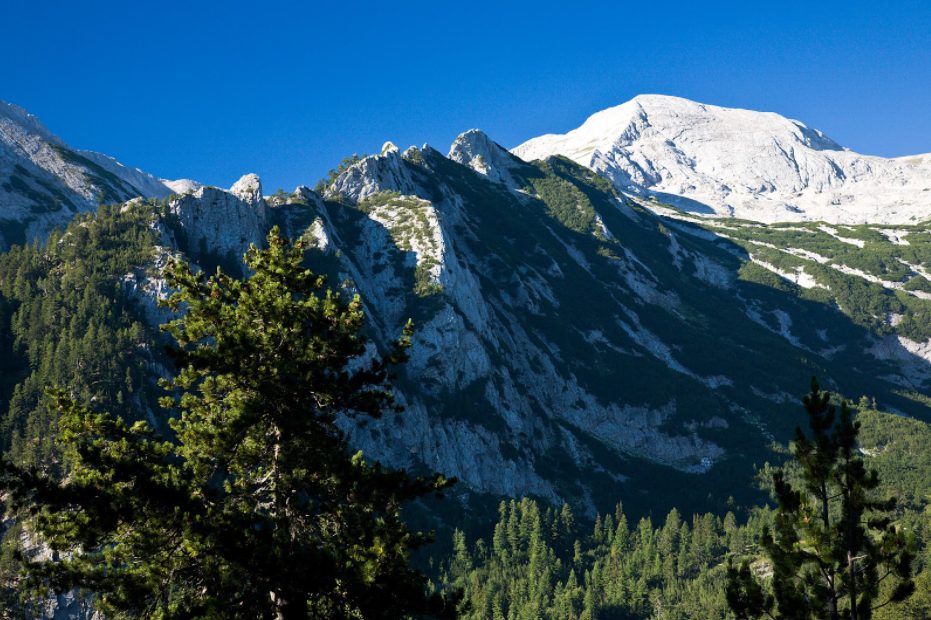 Other interesting sights to visit in the area around Razlog

Although climbing the steps of a natural phenomenon or Going on one of the routes we have presented to you is an experience that cannot be compared to anything else, for people who have no experience in alpine climbing, this is a mission almost impossible.

For those of you who are not on “You” with climbing, we offer some interesting, but less extreme sights, which you can visit while in the area of ​​Razlog and Bansko.

One of the new attractions in Razlog is the panoramic alley Steps. The alley starts a little outside the city and leads to Golak peak . It is named after the natural phenomenon Steps, which has perfect visibility from the top of 12-meter tower , which rises in the end of the alley.

Along the way there are many places for recreation, panoramic playgrounds and information boards, from which you can learn everything that interests you history of the city and for the flora and fauna of the Pirin Mountains.

The place where the alley will be built has been chosen very carefully. This is the path that in 1912 the Bulgarian army descended from Golak peak and liberated Razlog from the Ottoman yoke. 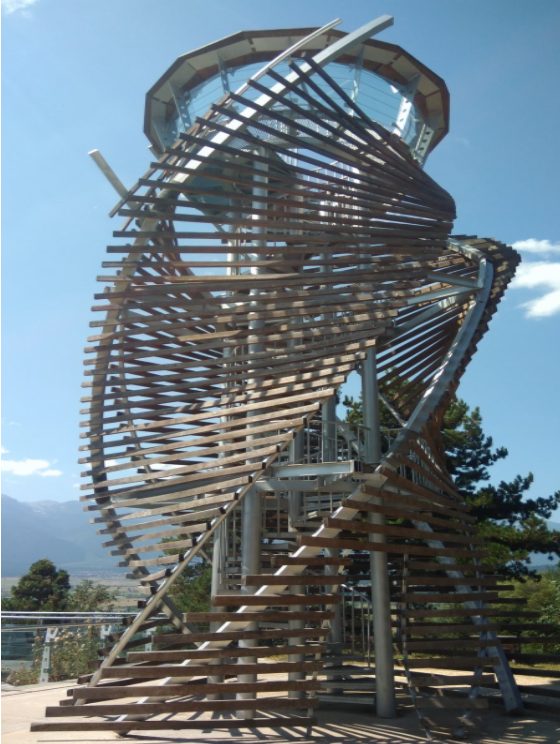 If you’re a fan of hiking, that doesn’t require heavy loads, a walk to Yavorov hut will charge you with positive emotions and a lot of energy.

You can reach the hut by several routes , but It seems that the most popular (and easy to overcome) is the Betolovoto area.

The area is located southwest of Razlog on the road Bansko – Simitli. You will see a sign shortly before you reach it, so there is no danger of passing it.

If you reach the area, you must continue with your car, until you reach the information boards of Pirin National Park. You have to leave your car somewhere and continue on foot.

Near the signs you will find a path with yellow markings, which you have to go. The path does not deviate anywhere, so you can’t go wrong.

The transition to the hut is about an hour (at medium speed). The terrain does not have a large displacement, it is of medium difficulty and apart from a few slightly steeper climbs you will not encounter any difficulties.

When you reach the hut you can support yourself with a delicious lunch and a cup of fragrant mountain tea and enjoy the beautiful views, which are revealed to the rock phenomenon Steps. 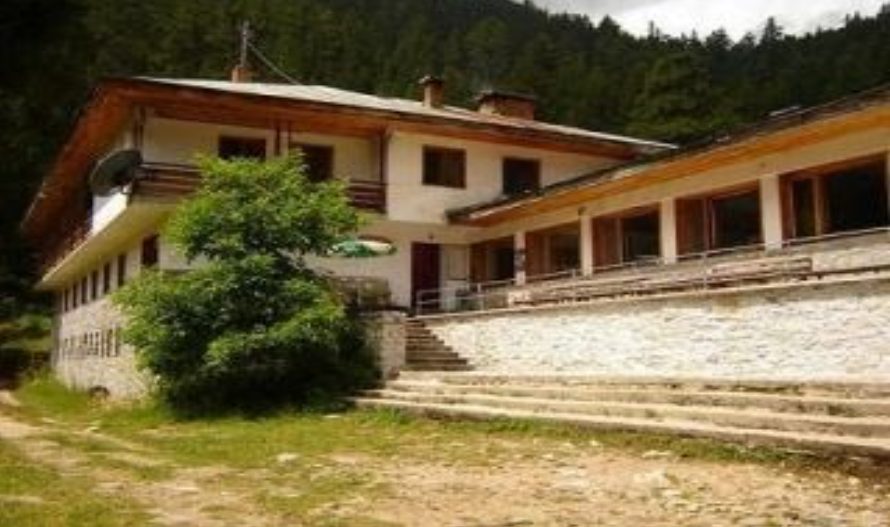 And if you don’t feel like going home, you can spend the night in the hut and the next day to make a few strenuous hikes in the mountains.

In the immediate vicinity of the hut is Haidushkata fountain, which you can reach on a marked path in about 40 minutes.

If this walk seems too short or easy, then you can reach the base of the rock phenomenon Sobitsite or the source of the White River .

Or you can go back and instead go back to your hotel in Razlog or Bansko to stop by Pirin Golf Club and to be rewarded with a cup of coffee or a drink .