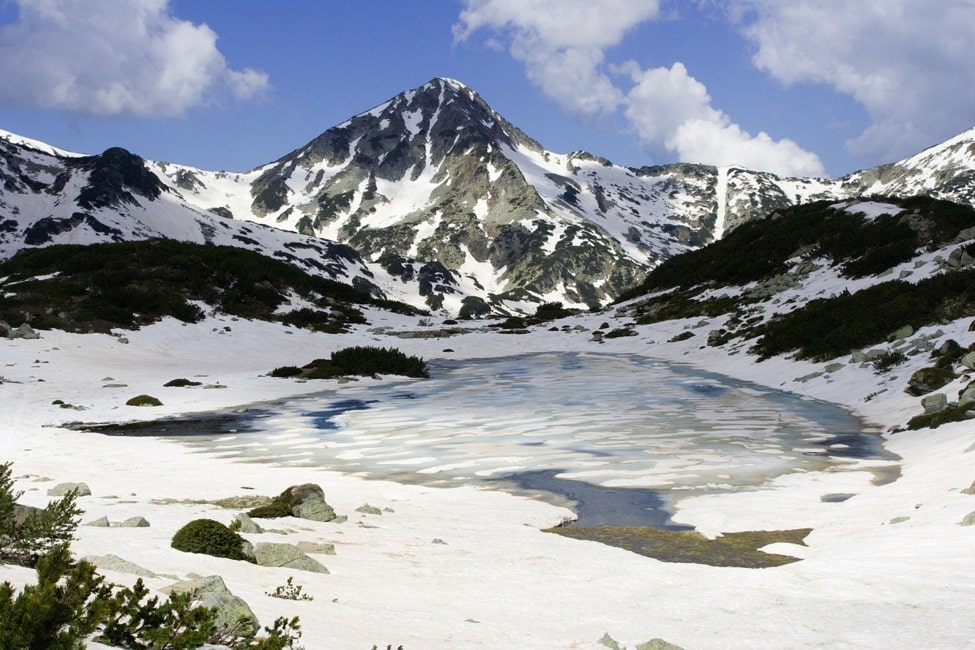 The winter resort of Bansko, Bulgaria, offers a variety of entertainment options not only in winter but also during the summer season. In fact, the popular ski resort in the Pirin Mountains is a widely preferred holiday destination not only for Bulgarian tourists but also for foreign tourists all year round.

It’s easy to think of the reasons: beginning from luxury SPAs and hotel complexes, going through traditional Bulgarian restaurants, and all the way through the list of natural, cultural, and entertainment activities to explore.

To get your Pirin Mountain adventure going, we are giving you the full list of mountain routes around the town of Bansko. Some of them are perfect for mountain biking, others are ideal for summer hiking, and others are just made to give you a long day away from the hustle and bustle of the city.

So – grab your map and bring your friends, because summer Bansko is calling!

Popular Mountain Routes in Bansko and Around

We will start your trekking guide with one of the main routes crossing the region of Bansko. This is the Е4 Euro Route – „Pyrenees – Alps – Rila – Pirin – Olympus – Peloponnese”. It starts from Spain, passes through France, Switzerland, Germany, Austria, Hungary, Romania, Serbia, Bulgaria, and Greece, and continues even to the Crete island.

In Bulgaria, the route crosses Vitosha, Verila, Rila, Pirin, and Slavyanka mountains, and on Gotsev peak, it meets the border with Greece. Its total length is 350 km with variable terrain, and it is wildly popular among experienced mountain tourists.

Types of Tourist Routes Around the Town of Bansko

There are two types of tourist marking depending on the type: strip and graphic.

The strip marking type is a horizontal three-band sign made with paint or other material. The middle strip is the main, leading color, and the lateral lines of the leading colors help distinguish it to attract attention to the main strip.

On the other hand, the graphic marking form contains different symbols: 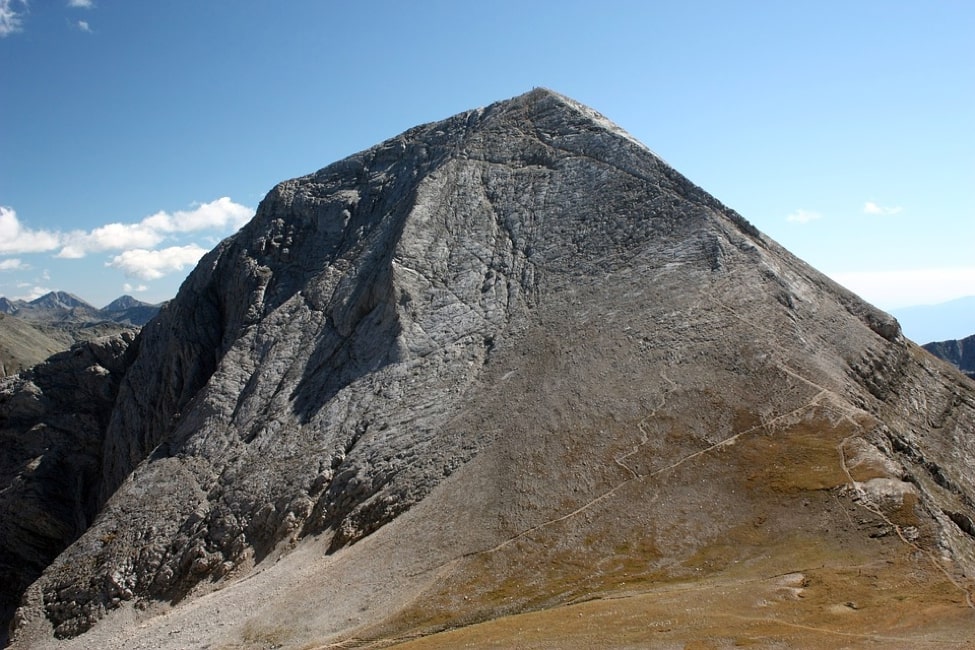 Currently, the total number of marked hiking trails in „Pirin“ National Park is 20. They are numbered with Roman numerals, and each of them has a different length and level of difficulty. In addition, many exploration and tourist routes have been built, along with interpretative trails in the adjacent areas of the park.

The mountain routes in Pirin National Park have a total length of over 370 km. Of these, 247 km are overlapping in some parts and 213 km, which are not overlapping, fall within the borders of the park, including 12 km that cross the territory of a reserve.

In certain places, the routes intersect, creating options for greater diversity when winter or summer mountain hikes are organized from one place to another.

The routes have a marking of the terrain with five colors in total: red, yellow, green, blue, and brown. In addition, all starting, key, and intermediate spots of the routes have plates placed on wooden sticks indicating the direction.

Below, you will find a full list of the marked hiking routes in the Bansko area of the Pirin National Park. 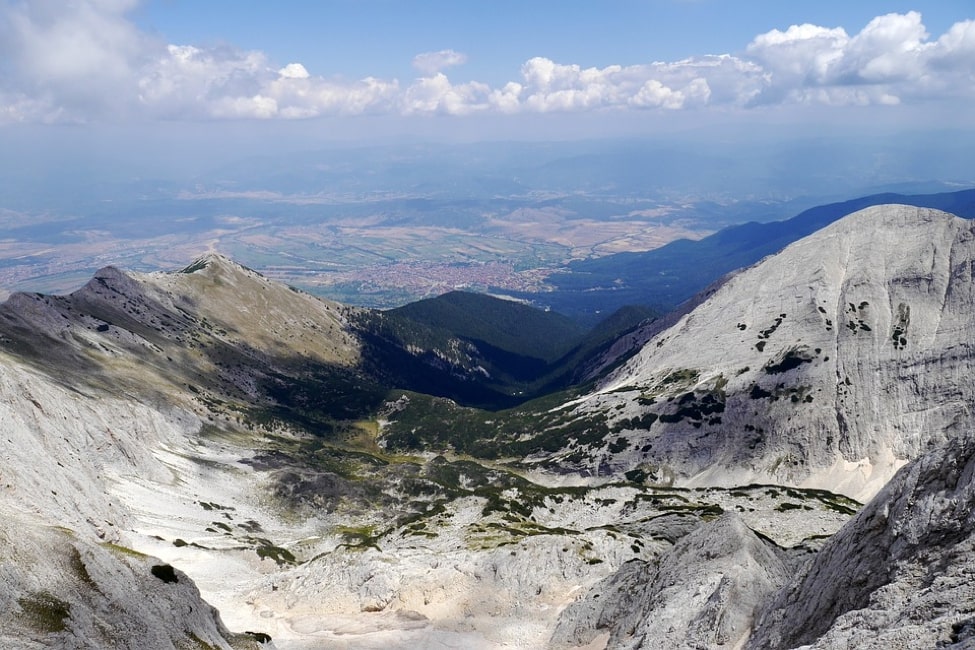 Route N I with Red Marking

This one begins from the intersection to „Yavorov“ hut (which passes through the main road to the town of Razlog from the city of Blagoevgrad, Republican road network) – to the town of Kresna. The duration of the hike is about 10 hours and 30 minutes.

This route begins from the town of Bansko. Then it goes through route Peshterite – “Banderitsa” hut – “Vihren” hut – “Yane Sandansky” hut. The duration of the hike is 9 hours in good weather and might take a bit longer in the case of unexpected weather changes.

This hike also begins from the town of Bansko and reaches „Demyanitsa“ hut – “Begovitsa” hut – “Yane Sandansky” hut. The duration of the hike is 11 hours, and it’s filled with some rather mesmerizing views of the mountains.

This perfect summer season adventure begins in the town of Dobrinishte. Then it goes through “Gotse Delchev” hut, “Bezbog” hut, and “Pirin” hut until it reaches the town of Melnik. The duration of the hike is 17 hours, and it is definitely among the more challenging mountain routes around.

Depending on your level of physical preparation, you can spend the night in the “Gotse Delchev” hut, “Bezbog” hut, “Pirin” hut, or all three of them.

Route Peshterata – “Sinanitsa” hut – Mozgovitsa – “Begovitsa” hut – Azmatsite route – “Pirin” hut. The duration of the hike is 11 hours, but you can sleepover or grab some food in every hut on the way before you keep going.

This is a generally light trip from the „Banderitsa“ hut through the Premkat route. The hike duration is 2 hours and 30 minutes, and most tourists won’t need mountain guides or equipment rental to cope with it.

The „Vihren“ hut – “Sinanitsa” hut hike lasts about 4 hours. It is relatively accessible and is guaranteed to give you a great timе while you explore the landscape of Bulgaria.

The „Vihren“ hut – „Demyanitsa“ hut hike will take you about 4 hours in total. You will enjoy the best weather in mid-July, but going through the trail is generally pleasant during the entire summer season.

The Vinarska gate – Mozgovitsa area – Popina Luka hike has a 2-hour duration and is among the best sightseeing trails around Bansko ski resort.

The „Demyanitsa“ hut – “Bezbog” hut hike usually takes about 4 hours and 30 minutes. It will take you directly to the breathtaking Bezbog lake, known as a prominent photographer hotspot in Pirin, especially with the Bezbog hut in the shot.

„Begovitsa“ hut – „Pirin“ hut is among the widely preferred hikes for medium-level mountaineers, and it lasts about 4 hours and 30 minutes. In autumn, the winds through the paths get a lot cooler, so don’t forget to grab your wind protection jacket.

The „Pirin“ hut – “Malina” hut – Vodopoya area – Popovi Livadi area lasts about 6 hours in total. It’s not the easiest path in the world to follow, but it is well-marked and will take you through places with stunning views, especially in the Vodopoya area.

Village of Breznitsa – Breznitsa chal – Popovo Lake – “Tevno Lake” shelter. The duration of the hike is 9 hours and 30 minutes in total, but it is all worth it, as visiting the Popovo lake and Tevno lake is a peak experience for all nature and beauty connoisseurs.

This route begins in the Senokos village, goes through the Shirinata area, and reaches the Pirin peak. The duration of the hike is 3 hours in total, and the Shirinata area will astonish you with exquisite natural outlooks.

Thе „Zagasa“ hut – Vihren preval route is not the most popular in the Bansko ski area. Still, it will take you to the slopes of Vihren Peak – Pirin’s highest peak – giving you a chance to both enjoy its majesty and push to conquer it.

The duration of the Harami bunar route – Popovo Lake hike is 3 hours in total. Popovo lake is surrounded by the Dzhanghal, Sivria, and Momini Dvori peaks, thus reflecting thief cliffs and forming a one-of-a-kind natural spectacle.

The Izvorite area – Kremenski Lakes – Jano peak hike is expected to take about 2 hours and 30 minutes in total. Make sure you take your time to chill near the four Kremenski lakes, as this is the highlight of the trip.

The „Zagasa“ hut – Albutin peak – route Suhodolski preval is also a well-marked hidden gem located in the Pirin National Park. You can find it on every park map, and you can put it on your to-do list when around Bansko.

Route N XXI – with Yellow Marking through the “Tisata” Reserve

Route N XXII – with Yellow Marking through the „Tisata” Reserve 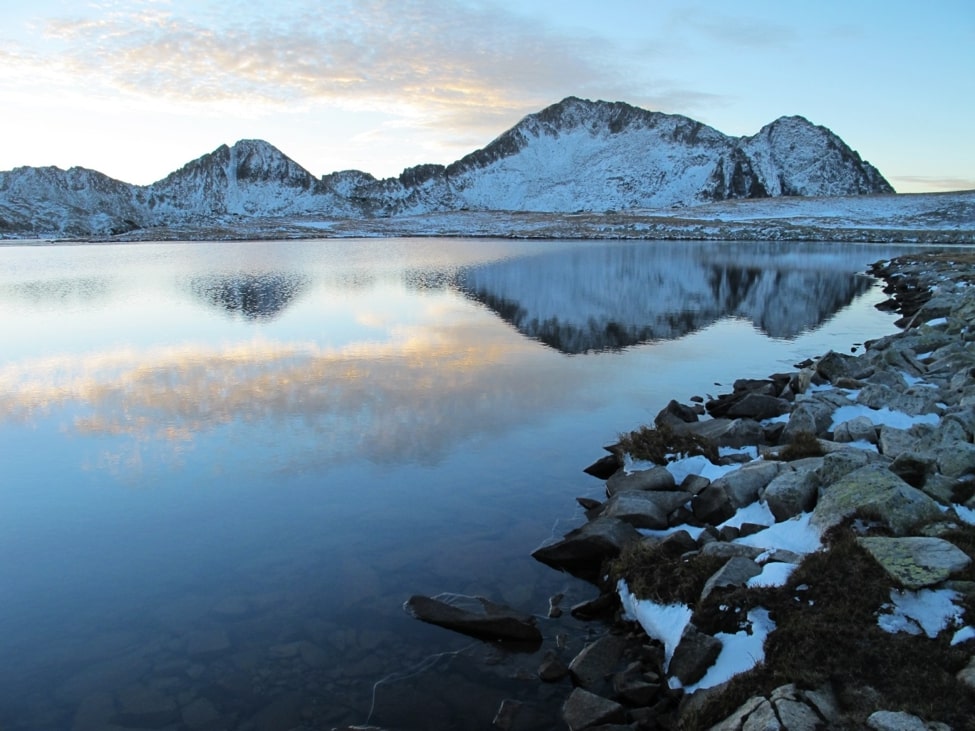 Tourist Routes in “Pirin” National Park that Have no Marking

These hiking routes have been created over time, and each one of them has different levels of difficulty and length. The creation of these pathways aims to make these natural landmarks and beautiful landscapes of Pirin National Park as accessible as possible for tourists.

Unmarked routes have always been an integral part of the mountain’s tourist network, and we can’t miss them. However, if you plan to make hikes following these routes, it is advisable to use the help of professional mountain guides or to be guided by tourists and mountaineers with proper preparation and experience.

Some of the tourist trails are educational trails for visitors. They are created according to various programs intended to introduce the natural landmarks of Pirin Mountain, its flora, fauna, geology, and history. In addition, some of these routes are suitable for educational lessons or outdoor eco path schools for children and adults.

There are many walking routes in „Pirin“ Park without markings. Therefore, there is no information about their exact number. Part of them include spots that you can combine with other routes. Most of them are located in the treeless area because it provides more picturesque views and incredible experiences for the tourists beyond the ski runs.

Their purpose is to bring diversity to the main routes by leading the tourists to a greater number of places such as cirques, peaks, lakes, rock formations, taluses, ridges, etc.

It is recommended for tourists to use the help of mountain guides as they have the required skills and preparation for hikes in protected mountainous territories.

Here are some routes without marking:

You can reach other natural landmarks by marked and unmarked routes, including the Muratovo Lake near the Muratov peak, the Belizmata dam, and more. 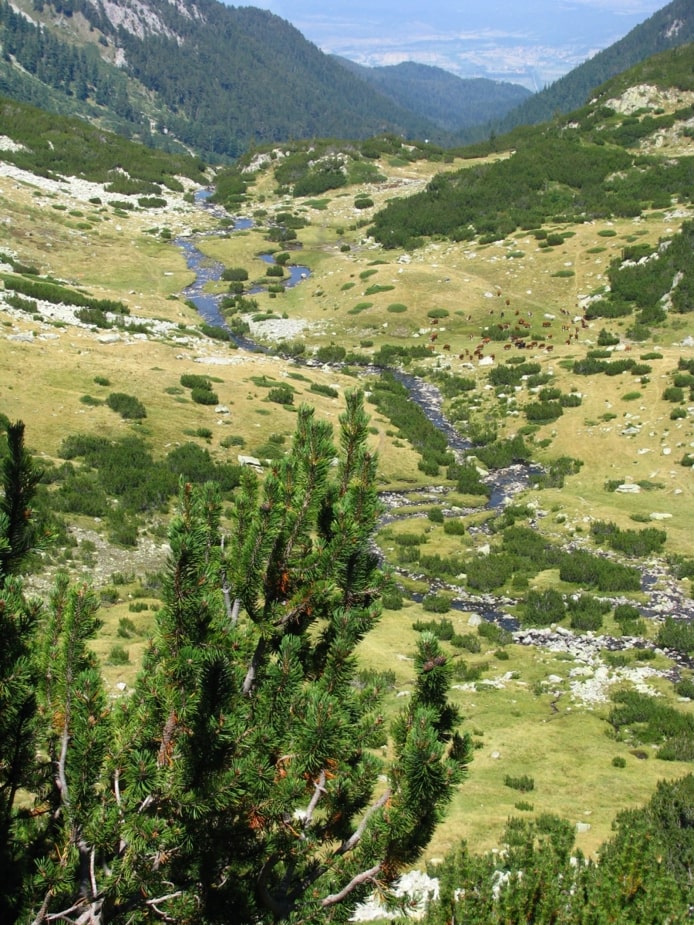 For those of you who love winter adventures, there are some top-notch winter routes in the region of Bansko, parts of which overlap with the marked and non-marked tourist routes.

The most popular winter ski-trekking routes out of the ski runs in the park include: 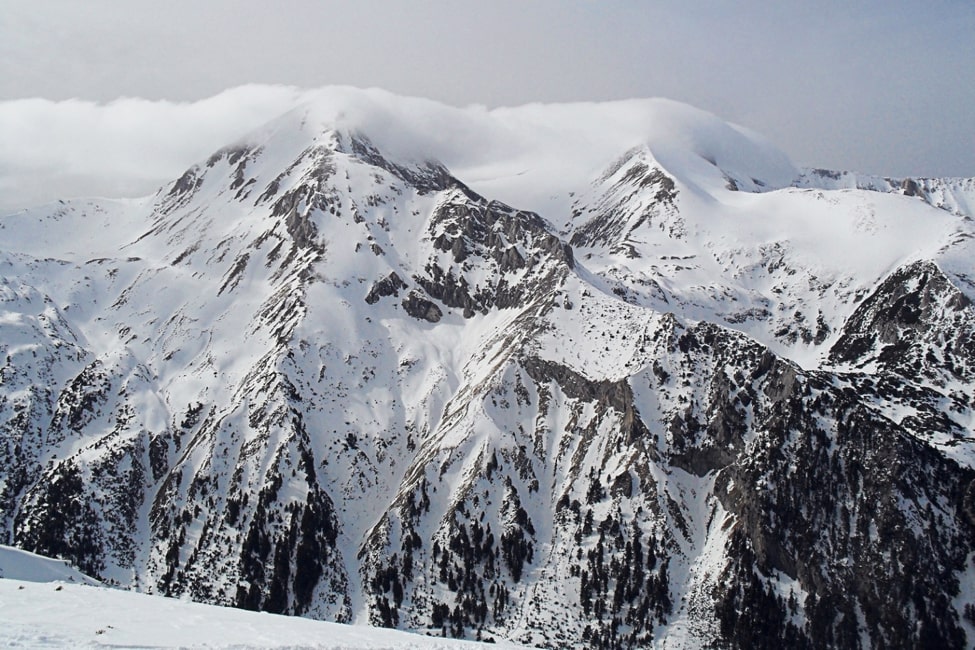 Thanks to the help of the municipality of Bansko, the association „Nikolay Proev – Proykata,“ Bulgarian Climbing and Mountaineering Federation (BCMF), Climbing Club of National Sports Academy, „Pirin“ National Park, were built two climbing spots with sports routes – Peshterite /the caves/ routes and “Vihren” hut in 2013.

For those of you who want to visit Pirin National Park, there are several places from which you can approach the famous park.

There are information signs with a map of the park with marked tourist routes in each one of these places that formed as main approach places.

The plates contain other important information, such as the main norms and regimes that each visitor should observe. There are markings along the tourist trails to inform the tourists and keep them safe on the routes.

We can enter the park by approaching it from these settlements:

Some hikes around the park will take you an hour, while some will take you to the shores of the Black Sea. All you need to do is choose your path and enjoy your big, bold Balkan adventure!