The great champion of the Balkans

Undoubtedly Rila Mountain is one of the most picturesque mountains offering breathtaking mountain views at any time of the year. The nature has colored Rila with divine beauty and gave it incredible variety of flora and fauna. There are many rivers, springs, streams and crystal clear lakes. 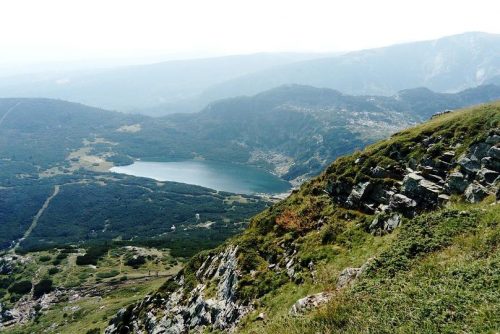 The fascination of Rila has caused a number of poets to write their greatest works, as well painters to reproduce the stunning beauty of the mountain on their canvas. For sure every Bulgarian has heard of the Rila Mountain. With its peak Musala, with height of 2925m, Rila is the undisputed champion among all mountain massifs.

Each year, with its stunning mountain beauty, this wonderful place attracts thousands of Bulgarian and foreign tourists from all over the world, passionate mountaineers and fans of the adventures in nature, as well lovers of the mountain serenity.

2629 km is the total area of Rila, and 1487 m is the average altitude of the mountain. Most of its mountain peaks are at an altitude of 2500 – 2700 m, and they reveal alpine views, such as from Malyovitsa peak.

Rila mountain is the highest mountain on the Balkan Peninsula and fifth in height among the mountains in Europe. Before Rila is the Etna volcano with height of 3340 meters.

It is situated in the northwestern part of the Rila-Rhodope mountain massif. Its highest parts are made of granite and marble, and its core consists mostly of granite. Rila Mountain is mainly built of intrusive and metamorphic rocks.

Rila mountain is a central hydrological point with a huge resource of hydropower. Rila is also the starting point of which the most high-water rivers in Bulgaria originate from: Iskar, Mesta and Maritsa.

The spring points of their tributaries (as well of Struma River) are also on the territory of Rila. These are: Blagoevgrad bistritsa, Belishka River, Rilska River, Gradevska River, Cherni Iskar, Prav, Levi and Beli Iskar, Cherna and Byala Mesta River.

Around 2000 plant species find their habitat in Rila mountain, as well a variety of mountain animal species. In Rila, forests of white pine, white fir and spruce are thriving. The animals include a variety of birds, amphibians, invertebrates, reptiles and fish, of which some species are endemic.

On the territory of the mountain is located the “Rila” Nature Reserve – the biggest of all national parks in the country. It is located between 800 and 2925 m above sea level, in some of the highest and central parts of Rila. In this park is located also Musala peak – the champion of the Balkan Peninsula. 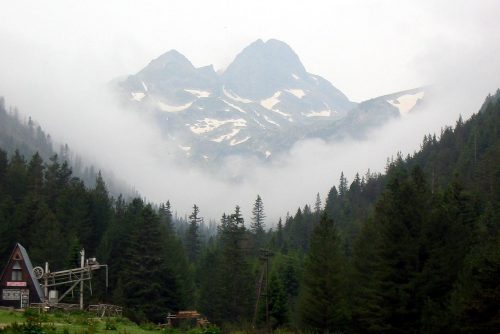 On its territory there are around 120 natural lakes, as most of them come from the ice age.

Nature reserve “Rila„ is declared a national park on 24th of February 1992. The area of the park is covers more than 81 000 hectares. The purpose of its creation is to be preserved some different ecosystems, as well some national sites of cultural and national importance.

On the territory of the park are located four Bulgarian reserves – Parangalitsa, Central Rila reserve, Ibar and Skakavitsa. Rila National Park is one of the biggest protected areas in Europe. Both reserves in it – „Parangalitsa“ and „Marichini Lakes“ are included in the World Network of Biosphere Reserves, created by the UNESCO program „Man and Biosphere“. 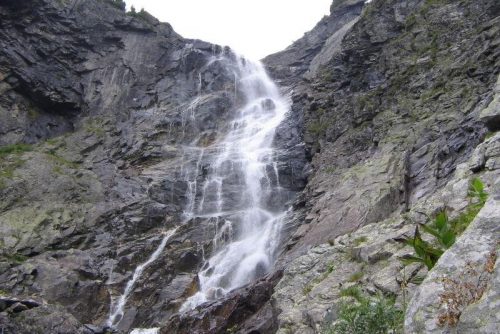 The Thracians are the first people to give name of the mountain in V century – Dounkas (as well Donuka and Dunaks), which in translation by the Thracians means “a mountain with abundance of water„. In the later period, the Slavs called it Roula, which translates as a “water mountain„.

The ice lakes in the highest parts of Rila have arisen during the glacial periods and especially during the quaternary period. Then there were exaration processes in the glaciers, thanks to which the cirque lakes occur. For this reason, they usually occupy bottoms of cirque and terraces, caused by the glaciers.

They are quite numerous and many of them have been preserved to this day. Of these, a total of 35 are temporary (they are formed during certain periods), while the rest of them are permanent. The most famous glacial lakes in Rila are the Seven Rila Lakes.

The Rila lakes are known as the Seven Rila Lakes and they are a lake group that is one of the most visited points of the country. They are included in the list of the 100 tourist national sites to visit. They are located in the central part of Rila mountain. In the group of the Seven Rila lakes are the Upper fish lake, Salzata/the teardrop/, Okoto/the eye/, Bubreka/the kidney/, Bliznaka/the Gemini/, Dolnoto, Trilistnika.

Most of the mountain lakes in Rila are characterized by small size, but their beauty is absolutely incomparable, and their waters are crystal clear. Most lakes are located at height between 2000 and 2600 meters and their form is either elliptical or round. The Rila lakes  are draining away one into another together with the Ribnite, Musalenski, Urdinite, Yakoruda, Grancharski, Valski, Kazanskite, Dzhendemski, Marichini, Manastirski, Skalishki, Ropalishki and Chernopolyanski lakes, which are also located in Rila.

The ice lake, located in the northern part of Musala peak, is one of the highest glacial lakes on the Balkan Peninsula. It ranks second in height after the Gorno Polezhansko lake in the Pirin mountain.

The lake in Panichishte in Northwest Rila has appeared as a result of tectonic activity. Its bottom is formed by the sinking of parts of earth surface, caused by flexures and faults.

Four Bulgarian reserves are located on the territory of the park. Maritsa River starts from the nature reserve, and it is one of the longest rivers and one of the most high-water rivers on the Balkan Peninsula.

In the eastern part of Lakatnik Rila there is a rich resource of centuries-old beech forests.

There are also a lots of mineral springs in Rila, located mostly in the areas of fractures such as Banya, Kostenets, Dolna Banya, Sapareva banya and other. 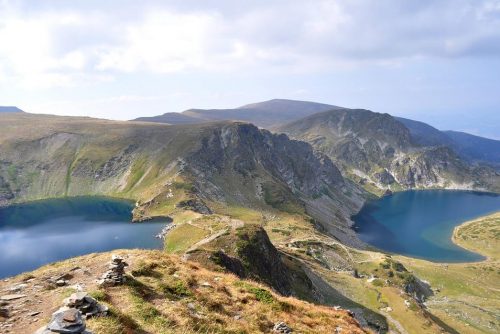 Of all dams in Rila, the largest one is “Beli Iskar“dam, the waters of which supply with potable water parts of Sofia city. The waters of this dam are also used for the production of electricity. Other Rila dams are the “Kalin”dam, “Karagyol”dam and “Belmeken”dam, located along the Sestrimska River.

One of the places in Rila that everyone have to visit, definitely is the Rila Monastery. This monastery is an object of great historical, architectural and national importance, and it has extremely interesting history. It is the largest in the country and it was built in X century. Its founder is Ivan Rilski, who is a famous Bulgarian saint and hermit. The monastery has a huge national, architectural and historical significance for Bulgaria.

“A fortress, raised up to the clouds, with self-styled made granite bastions… frozen in the skies after the last tremors and convulsions of the universe” – the well known by all, the Bulgarian poet Ivan Vazov poetically glorifies the mountain beauty of Rila.

The legend of the Seven Rila Lakes

According to the legend of the Rila Lakes, when the Earth wasn’t yet inhabited by humans, thousands of years ago, Rila was the home of two giants, a man and a woman. There was a strong love between them, and they loved really much their beautiful and cozy mountain home. Their home was always full of sunshine, it was warm, greenery everywhere, the beauty was all around them. 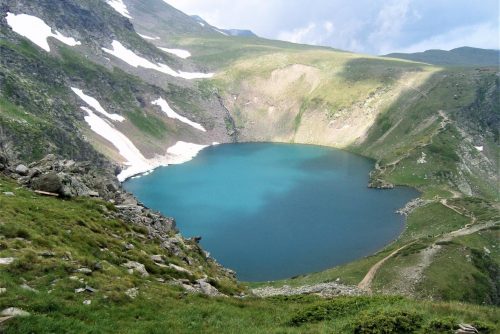 Unfortunately, their happiness was about to end. One day evil forces found their place. When they saw its heavenly beauty, the evil forces started to envy the family of giants and their lovely home. They decided to destroy it, as well their strong love.

The evil forces sent to them dark storm clouds and strong winds, as well destructive earthquakes. The giant man defended bravely his home and his wife. He was very stubborn and tried to defend every spring, each greenery and flower. Contrary to his efforts, the evil forces didn’t give up and made even more violent attacks.

During one great battle with the evil forces the giant was killed. While enjoying their victory, the evil forces left the place, and everything that was left was bare valleys, destroyed rocks.

The sorrow of the woman of the giant was so strong, and she didn’t stop crying for days and nights. Her tears flowed down the mountain slopes and they gathered in the valleys. Thus there were formed the mountain lakes with crystal clear waters. Nowadays, when a person walks to the Babreka Lake/ the kidney/ and the Salzata Lake /the teardrop/, between them a giant figure can be seen with the form of two big human figures. According to the legend these are the bodies of the two giants in love, who have stayed forever in this form to protect their mountain home.