While enjoying your vacation in our hotel Lucky Bansko, you can visit some beautiful places, enchanting with their amazing natural sights. One such is the Stob pyramids. This is one of the most famous tourist attractions, the interest in which does not subside and not by chance. 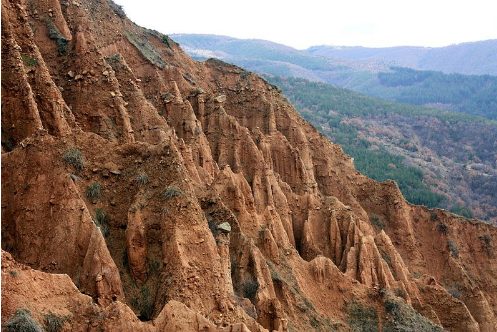 Location and characteristics of the pyramids

The Stob pyramids are located in the western part of the Rila Mountains, just above the village of Stob. They were declared a natural landmark in 1964. The Stob pyramids are distinguished by their rock formations, which in most cases are conical in shape and end with stone caps resembling mushrooms.

The average height of the pyramids is between 7 and 10 meters, and in some places, it can reach 12. Their total width is 40 meters, and the area occupied by these rock formations is about 7.4 hectares.

It took thousands of years for the pyramids to take on this shape. All this is due to various climate changes, ranging from melting glaciers from the peaks of Rila to winds, heat and various natural phenomena that have contributed to the formation of this phenomenon.

In its northern part, the Stob pyramids are much more pronounced and stand out quite well. This is because they are fewer in number and give them the freedom to stand out.

On the southern slope of the ridge, the pyramids are much larger and more densely spaced, so they tend to merge in places. Their colour blends between yellow and brown, which further emphasizes their beauty.

There is various information about the city of Stobi, which creates the ancient chronicles of the city and its fortress walls, towers, mines and aqueducts. It is believed that the city was in its heyday around the IX century, after which it was destroyed in the XII century and rebuilt during the Second Bulgarian State.

The city was first included in the Bulgarian state in the IX century by Khan Krum. It is believed that Bulgarian troops managed to defeat the Byzantines in the distant 1190, but later the city became part of the Nicene Empire by John III Duka Vatatsi. After that, the city again managed to be conquered and annexed by Ivan Alexander.

In his book “Travels in Bulgaria”, Konstantin Irechek shares his impressions of what he saw in this part of Bulgaria in the XIX century.

He describes how the village of Stob is located on the left bank of the Rila River, and on the right bank in the meadows, grassy mounds appear. Describes how the ruins of a fortress and the remains of a tower with a window can be seen at the top above the village.

Some believed that these were parts of Peter’s Tower, known from the stories of King Peter. During his tour of the area, Irecek wanted to climb to the top, but residents stopped him because the road was impassable.

In his book, he describes that he is sure that this is the fortress of Stob, which was conquered by the so-called “Sarai” meadow, which was located just below the fortress. Here is the only church in Bulgaria, which bears the name “St. Prokopiy”.

Excursions and why attract tourists?

The walk to the Stob pyramids is extremely pleasant. In the first place, incredible picturesque views and natural resources are revealed, which prove that we humans are a small part of nature and it is much more powerful and majestic than us.

The transition is extremely easy and short. The journey that takes you to the top of the Stob Pyramids takes about 40 minutes, so it takes you to return. It does not require prior preparation, as there are no extreme and hard-to-reach places. It can be easily done by people of any age.

In places it is secured with a railing, so passing it is safe for you. And what you will see as you walk along the path, as well as when you reach the top, is something that will surely take your breath away.

There are many legends about how the pyramids appeared. Interestingly, each of them is associated with marriage and unrequited love.

According to one legend, the place where the pyramids are now located used to be a large, vast plain on which people gathered to celebrate when there were weddings and various festivities.

There was a young boy and girl in the village who were madly in love and wanted to get married. The girl’s mother did not want her daughter to marry this boy and expressed her disagreement. However, the young lovers decided that they would still get married and have a wedding.

When the mother found out what her daughter was going to do, she went to the plain, drove a large cross deep, and cursed her daughter to turn to stone, along with all the guests, the moment she was kissed by her lover.

The wedding day came, everyone was very happy for the young couple, only the mother did not attend the event, but stayed at home and prayed for what she wanted to happen.

While the dance was being played on the plain, it was time for the kiss. The moment the groom kissed the bride, the two of them, along with all the celebrating wedding guests, were petrified. This is how the pyramids were formed, reminiscent of what happened.

According to another legend, again a young couple in love from the village of Bozovaya also wanted to get married. Their village was located on several hills and different neighborhoods and was only a few kilometers from the pyramids.

Since the nearest Christian church was in the village of Stob, they went to it on the way, passed the Momena area and came to a path that was next to the pyramids.

There is a third legend that spreads in these areas and it is known as the “Bride”. This is the legend of the impossible love of a Bulgarian girl with a Turkish boy.

It is said that the girl suffered so much because of the disapproval of his parents that she could not stand it and threw herself off the rocks. After this incident, the rock formations were formed.

How to get to them from Lucky Bansko Hotel?

To get to the Stob pyramids, you must first go to the village of Stob. The distance from Hotel Lucky Bansko to the village is not great, about 70 km, which is approximately 1 hour and 15 minutes by car.

For this purpose you pass Simitli and from there to Kocherinovo. Shortly afterwards you will see a signpost and a detour to the village of Stob. Once you enter the village, watch for signs directing you to the Stob pyramids.

Your whole road should be asphalt, it will take you to the beginning of the pyramids, where there is parking. There begins the path that you will take to reach the Stob pyramids.

At the beginning of the eco-trail there is an information board with a indicated tourist route. It starts from the church “St. Prokopiy”, which is located in the western part of the village. During the walk there will be beautiful views of the Stob pyramids, which will make your experience even more exciting.

In some places the path is steep, but it is not something that should bother you. Also, some of the rocks are located on precipices, but they are safe. During the walk you can enjoy not only the Stob pyramids, but also other majestic hills of Rila Mountain.

This would be a pleasant experience for you and your loved ones, to charge you and prove to you how beautiful our nature is.