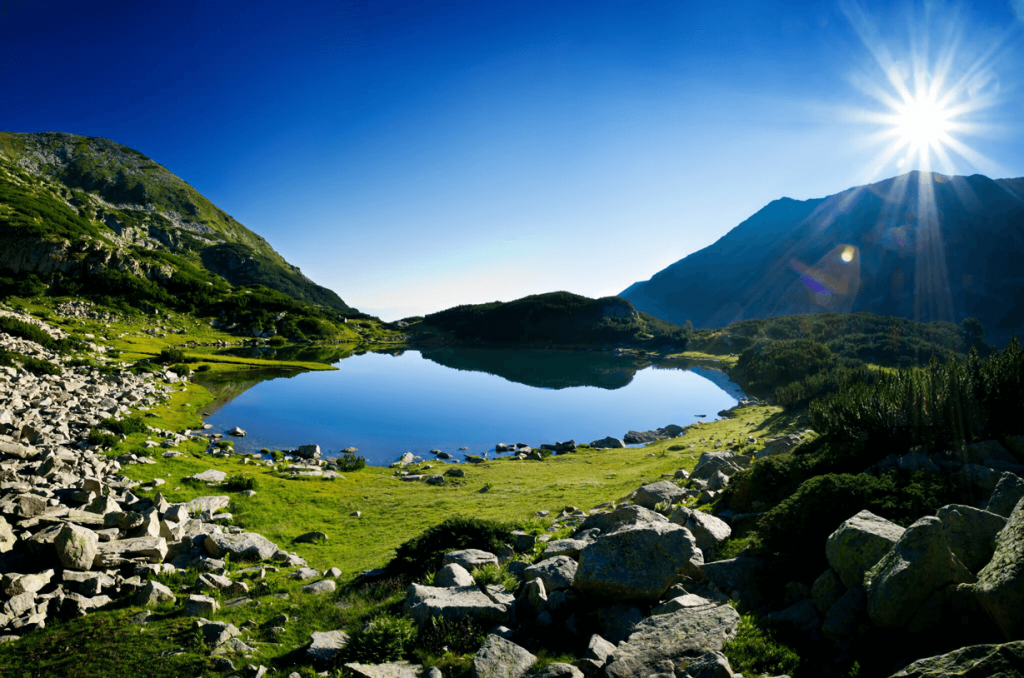 Pirin Mountain keeps astonishing uswith its unique beauty that impressesboth Bulgarian and foreign tourists every year. Sinanitsa peak is one of the most beautiful peaks in Pirin Mountain and in Bulgariain general. So do not miss the chance to see its uniqueness when you are in the region of Bansko. A picturesque view to the entire mountain reveals from there.You can enjoy thebeautiful emerald blue lakes, crystal streams and spacious fields, nestled between sharp white rocky peaksthat seem to want to touch the sky.

Sinanitsa peak rises at an altitude of 2516 meters. It is located in the western outskirts of Pirin on the Sinanitsa lateral ridge. Sinanitsa is present in the ranking of the highest mountain peaks in Bulgaria.

It is part of one of the most majestic mountain massifs in Bulgaria. Its other names arethe Split peak, Varovita chuka, Chukta, Blue peak and it has a distinctive structure. The name Sini vruh /Blue peak/appears as a result of unsuccessful attempt to rename some peaks in Pirin.

Rocky walls with whitish color are descending downhill from its sharp peak. These walls gradually turn into spacious taluses on their way down. They reach the shores ofSinanitsa Lake at the base of the cirque.“Sinanitsa” hut is located on one of its shores.Viewed from the side of the hut, the peak built of marbles has adistinctive appearance.

It is located on Sinanitsa lateral ridge to the west of Momin peak and to the southwest direction of Georgiytsa peak. The peak is located above a cirque, in which is located the homonymous Sinanitsa Lake. The western and southern sides of the cirque is completely surrounded by magnificent vertical rocks that form a wall.

The beginning of the wall starts from “Sinanitsa”hut,then it continues to rise steeply to Sinanitsa peak and gradually decreases its height by approaching the saddle, called Sinanitsa gate.A route with marking between the huts “Vihren” and “Sinanitsa”passes through it. It has a connecting role for the BigSpanofield /Golyamo Spano pole/cirque and the cirque below the top.

Despite its steepness, the vertical slope of Sinanitsa can be crossed. This is possible thanks to the created passing trail. This section is marked with stone pyramids and connects Sinanitsa peak with Sinanitsa gate.The environment there is incredibly beautiful and reveals amazing sceneries.

Thesharp peak of Sinanitsa, combined with the impressive wall of rising rocks, with dwarf pine bushes growing in some places, andwhose reflection can be seen in the crystal clear waters of the Sinanitsa Lake, offers every tourist a great experience. The steep and overgrown southern slope of the peak suddenly ends, and the white steep rocks located on the northern part begin to descend to meet the crystal clear Sinanitsa Lake.

The peak is composed mainly of pink-gray marble. Sinaitsa has a typical split look, which is its distinctive feature. Its form is especially visible when observed from southwest, for example, from the town of Sandanski. As we know, Pirin Mountainhas a dynamic relief and this is also visible in Sinanitsa peak. It offers a climbing challenge for the mountaineers, but effort are definitely worthwhile. Its southwestern part is the most visited.

When the weather is clear, a breathtaking view reveals from the peak to the rising marble ridge of the champions of Pirin– Vihren peak, Banski Suhodol and Kutelo.The popular rocky edge Koncheto is located between Kutelo and Banski Suhodol to the southeast.

The fascinating panorama extends also to Kamenitza peak to the southeast.The famous Sinanitsa hut is located on the northwestern shore of the Sinanitsa Lake.We can get there within an hour.

There is a pile of stones on Sinanitsa peak, with a plate placed on top of the stones, whose inscriptions unfortunately can’t be read. The peak is wide enough to gather a few people and there is sufficient space for a person to sit on the bare walls.

The weather conditions at Sinanitsa peak change quite quickly and we should be prepared for that. At one point, it may be clear and in the next moment we see the dark clouds coming with noisy lightning. 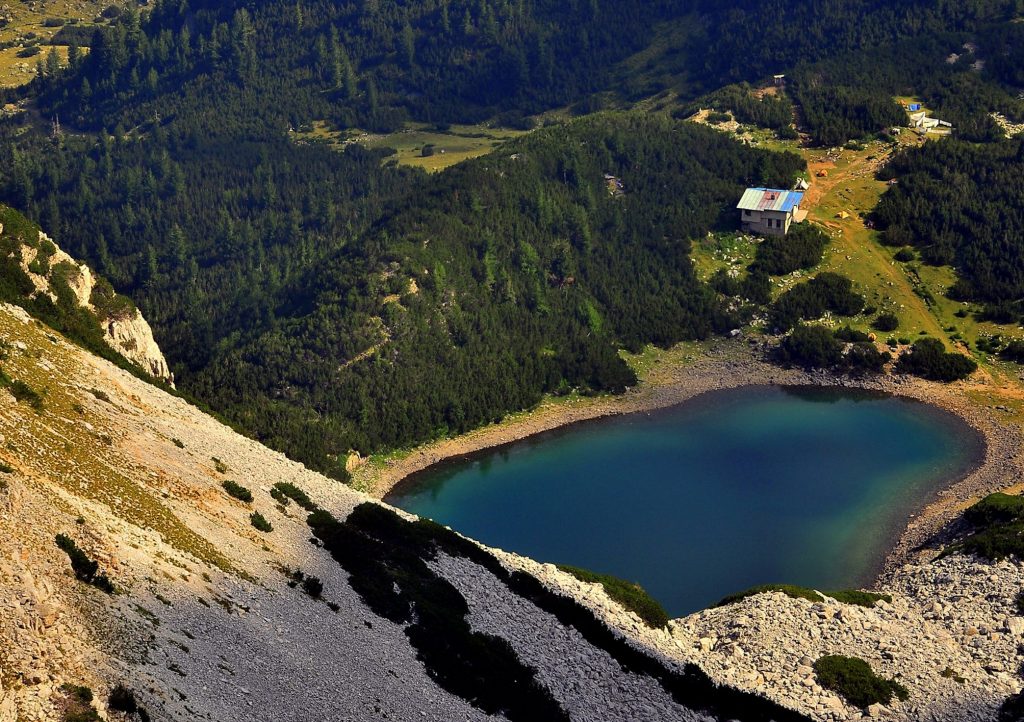 To the northeast, the peak has a 200-meter vertical wall, which is an Alpine climbing spot of category “а”. Andrey Todorov and Vasil Nastev climbed this wall for the first time on 12.07.1949, and the first winter climbing was achieved by Encho Petkov and Yordan Machirski on April 27, 1955.

Myths and legends about the peak

An interesting legend is related to Sinanitsa peak. According to the legend, a beautiful girl called Sinanitsa often went to feed her flock near the mountain peak.The rumors of her amazing beauty one day reachedMurat Bay, and he senthis men to find her. But the girl successfully escaped from every attempt of the Turks to catch her.

But one day, Murat Bay and his men decided to follow secret paths that weren’t known by Sinanitsa. So he managed to catch her when she was standing on the very top. At the moment she saw him, she realized that she has two options – to let her be caputred by the Ottoman soldiers and toaccept the foreign faith or to kill herself. So she decided to jump from the top, which still has her name to this day.

Facts about the Sinanitsa Lake 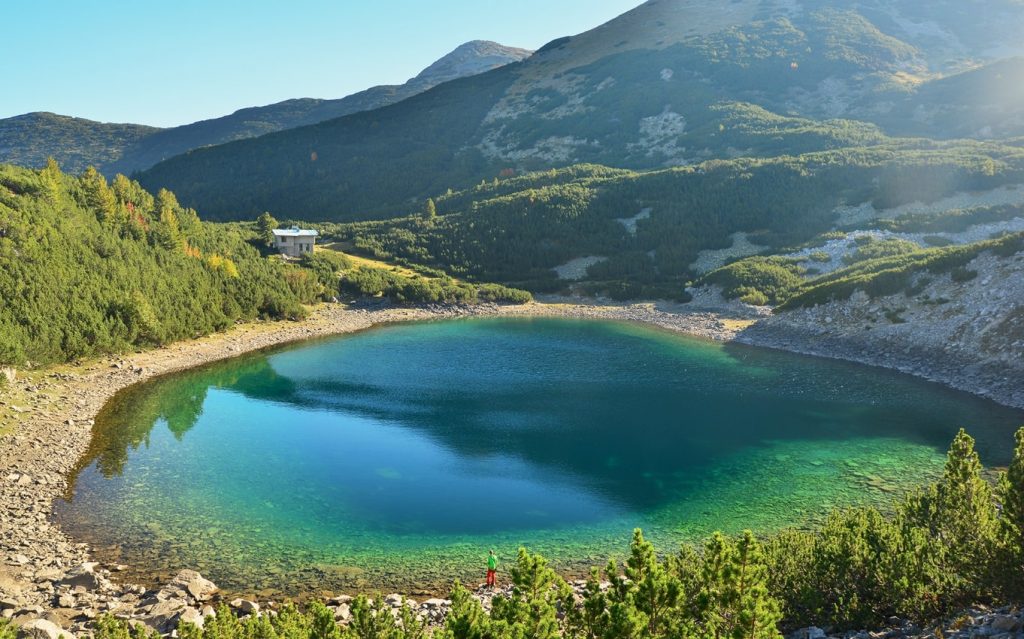 Sinanitsa Lake is a glacial lake on the western slope of North Pirin. Sinanitsa hut is built on the northern shore of the lake. Its second name isGolyamo/Big/Sinevrushko Lake. It is located in a deepcirque at 650 m to north-northeast from Sinanitsa peak, at an altitude of 2181 m. With its depth of 11.5 mit ranks in top 10 of the deepest lakes in Pirin Mountain.

How to get to the peak?

Due to the fact that it is situated a little further away from the other tourist sites in Pirin Mountain,Sinanitsa is a less visited peak, but it is a favorite place of many tourists. We can get to Sinanitsa peak by taking the route from the huts Vihren, Begovitsa (Kamenitsa), Yane Sandansky or the shelter Spano pole.Each of the routes leading there lasts between 2 and 6 hours.

It is recommended to get to Sinanitsa peak through Sinanitsa gate. This route starts from the entrance of Sinanitsa hut and passes along theleft shore of Sinanitsa Lake. The path is quite steep and passes through taluses and dwarf pine bushes and becomes even steeper as we climb it takes about 50 minutes toreach the top.

At the foot of the peak is located the closest starting point– “Sinanitsa“hut.  One of the routes leading to it is from the town of Bansko to Vihren hut. This route will take you about 4 walking hours,and if you go by car – 16 km on an asphalt road. A path with blue marking starts at Vihren hut leading to “Sinanitsa“hut.

The route from “Sinanitsa“hut to Sinanitsa gate lasts about20-30minutes. The other route starts from the town of Kresna,where is located the railway station.  This route is quite long as for its most part is a road and it takes 9 hours to walk it.

If you choose the route from Bansko to Vihren hut on your way you will see many remarkable places, including the beautiful Muratovo Lake. The path offers a difficult climb to the foot of Muratov peak and Banderitsa gate. After you pass them, the route becomes completely flat except for certain locations.

The “Spano pole“shelter is another starting point to Sinanitsa hut, and to pass this route you will need about 2 hours. In order to reach this shelter you can start from the town of Sandansky, from the“Tevno Lake“shelteror from the huts “Vihren”,Begovitsa“, “Yane Sandansky“,as each one of this routes has a different duration.Another less known route to the peak is a well-maintained road that starts from the marble quarry over thevillage ofIlindentsi, which leads directly to the peak.

For those who wish to stay in „Sinanitsa“hut, it offers a well-equipped tourist base.  The guests of the hut can enjoy a spacious dining room, kitchen and a guarded parking lot. The capacity of the rooms in the hut is 50 people. If you go there in the summer, the place is suitable to place a tent in the improvised campsite near the hut. It is a starting point for hikes to the town of Kresna and Vlahi village, as well as to the ski-resortof Bansko.

It is recommended to visit the peak when the weather is fine, in spring or summer, when everything is green and the views are breathtaking. Nice weather allows the mountaineers to spend enough time to relaxafter reaching the peak and to enjoy the magnificent view to theSinanitsa cirque.There you can see the permanent inhabitants of the peak –covey of mountain crows, whose “musical” performance shouldn’t be missed.

If you have decided to climb this peak, keep in mind that it is not the easiest one and the climb will be a challenge. It is not one of the highest peaks in Bulgaria, butits climbing is difficult. In order to reward us with its beauty, we have to be ready to overcome its challenges.

You will need suitable equipment, physical preparation, patience and willingness to overcome the difficulties on the route, as well as to be able to withstand the weather changes. The steep sections and areas with many stones can seem endless in places. But the efforts will be rewarded with the magnificent mountainous views that are revealed from Sinanitsa.