If you are a passionate lover of nature and love to explore its landmarks, then today we offer you to go to an extremely interesting destination – the rock formation “Wedding”. 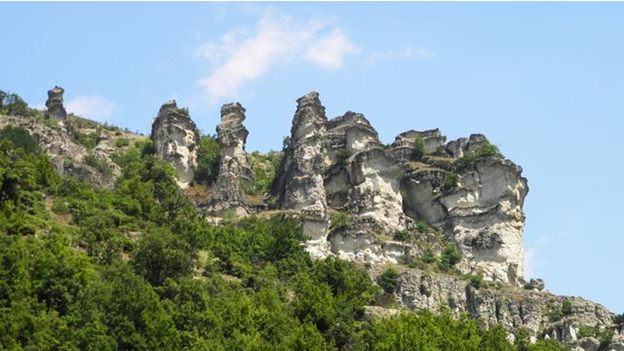 The interesting rock phenomenon is located in one of the most beautiful parts of the Rhodope Mountains – Dabrash. It is located on the land of the Blagoevgrad village of Osenovo and is about 29 km away from our largest ski resort Bansko.

Situated on an area of 31.1 hectares, the natural formation is a rock complex, which consists of different in size and shape rock formations that resemble human and animal figures. The rocks have acquired their bizarre shapes under the influence of winds and corrosion of limestone rocks.

How to take a closer look at the rock phenomenon?

You will see the first figure from the natural formation almost immediately after the turnoff for the villageOsenovo. There, on the sides of the road itself, rises alone 7-8 meter rock mushroom. The base and stem of the mushroom are made of sediment and other types of rocks in different colors. Her “hat” is made of volcanic rocks such as tuffs and others.

The trail is about 700 meters long, but has a fairly large displacement, so the climb is not recommended for young children and people with disabilities. It will take you 20-30 minutes to reach the rock formation, but once you reach the top, you will forget all the effort you put into the climb. The panoramic view of the “Wedding” that unfolds before your eyes will leave you completely speechless.

Located next to each other, in different sizes and shapes, the rocks of the peculiar rock composition seem to tell their story without words. Viewed from above, the rock natural formation looks like a group of people going somewhere together. Some of the rocks are small, others are of medium height, and there are some that reach a height of 20-25 m.

In the way the winds have sculpted them, some of the mushrooms have the shape of small children, others – of men, women and animals. And they all seem ready at any moment to continue on their way. And near them rises the body of a huge bear, standing on two legs, which “looks at them angrily”.

If just the view from above is not enough for you and you want to get a real idea of the size of the rock figures, you can go down the sloping terrace, which is at the heart of the phenomenon. Once you go down you will be amazed by the incredibly large size of any of the rock formations.

Why is it called “The Wedding”?

The locals call the rock formation “The Wedding” or “The Man” because of the legend that has been told for centuries and passed down from generation to generation. According to her, many years ago two young people from the nearby villages Osenovo and Gostun fell in love and decided to get married. On the wedding day, the bride and groom left Osenovo for Gostun to pick up the bride.

In the middle of the road, however, the mother-in-law remembered that she had forgotten to take something and decided to return. She asked the wedding guests to wait for her and not leave without her, but they did not listen and continued on their way. When the mother-in-law returned and saw no one waiting for her, she became terribly angry and cursed all the wedding guests. As soon as she took her fierce oath, all the people invited to the wedding turned to rocks.

If you decide to see the rock formation and ask the locals about it, it is quite possible that you will hear it called “Druman rocks” or “Druman holes”. The locals call it this way, because of another legend, according to which a man named Druman lived among the rocks. When the Turks came, Grandpa Drumanlived among the rocks so as not to accept the Turkish faith.

Did you know that “wedding guests” are increasing? According to expert studies, the corrosive activities of the winds continue to sculpt new and new rock figures.

Of course, our lives are short and we are unlikely to see many new shapes, because it will take them centuries to bare and take on the shape of rocks. But the generations to come will be able to enjoy one of the larger and more lavish “Weddings” in time.

If you are on holiday in one of the hotels in Bansko, you just have to leave the city and go to Razlog in the direction of the village Osenovo. The distance is about 29 km, the road is only one, and a natural phenomenon can be seen from the road. If you are still afraid of losing the direction, the exact GPS coordinates of the rock formation “Wedding” are N 41.77244440608568, E 23.708278331905603.

Interesting places that are close to a natural phenomenon

In the past, the village was located a little higher in the mountains, but in the 19th century, for unknown reasons, the people of Osenovowent down 5 – 6 km and rebuilt their homes on the place where it is today. The new place of the village is chosen under a high limestone slope, which they call Saint Ilia.

If you decide to visit it, be sure to visit the chapel “Assumption of the Blessed Virgin”. Although it was built by locals only in 2005, it is worth taking some time.

Be sure to take the time to climb the limestone slope of St. Ilia, which rises above the village. It reveals not only incredibly beautiful views that will charge you with energy, but also if you are quiet and lucky, you can see among the trees a deer. According to legend, every year, just before Ilinden, a deer comes to the slope and stays on the meadow waiting for the locals to catch it and sacrifice it to the saint. 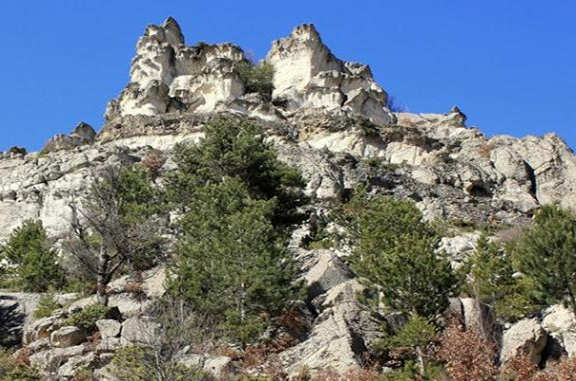 The village Gostun (the place that the unfortunate wedding guests never reached) is located about 10 km from Osenovo. The village is small, but very quiet and pretty. Here time seems to have stopped.

Take a walk through the cobbled streets, see the preserved authentic architecture, enjoy the beautiful views and try the incredibly delicious local cuisine. And when you relax and support yourself, you can see the landmarks of this great little village.

One of the biggest landmarks of Gostun is the megalithic Thracian sanctuary – Kara Kaya, located about 9 km. The sanctuary is a cult site, which is built around two centers, one of which is located on the rocky peak Kara Kaya, and the other is at the sources of the river Vishteritsa.

To get to the sanctuary, you have to take the hiking trail, which starts from the village itself. If you do not find the marking, ask the locals and they will guide you.

Kovachevitsa is a popular tourist destination, but if you have not visited it before, it is worth to go there and see. The village has an ancient history and there is certainly something to see. If you love architecture, Kovachevitsa is a wonderful example of a settlement that adheres to traditions and preserves and honors its history.

Here all the houses are preserved in their authentic form and you will need a lot of time to walk along the quiet, narrow cobbled streets and see everything. The village enchants everyone who visits it. Here it is as if the colors become brighter, the sun shines brighter, and the air is so clean that you have the feeling of sparks.

The landmarks that you can see in Kovachevitsa are many, but the biggest of them is undoubtedly the church of St. Nicholas. The three-nave pseudo-basilica was built in the period 1841 – 1848 and preserves the spirit and faith of the people of the village to this day. There are very few permanent residents in the village, but on the other hand there are enough hotels, guest houses and small family restaurants where you can relax and try the local cuisine.

If a walk around Kovachevitsa is not enough for you, you can go to the mountains to see the chapel “St. George” located about 3 km outside the village. And you can take the hiking trail, which will take you to one of the most beautiful cascades of waterfalls “Sinivir”. Kovachevitsa is located about 9 km from the village Osenovo, so it will not take you long to get from one village to another. 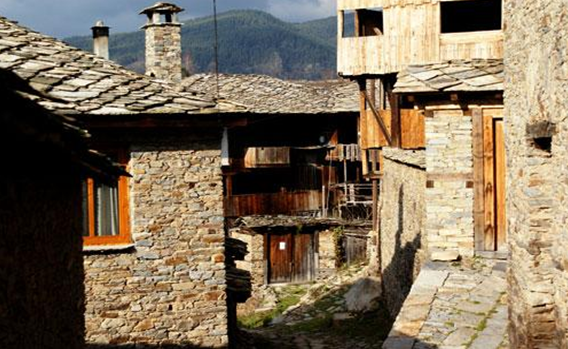 10 km from the rock formation “The Wedding” and the village Osenovo, in the direction of Dobrinishte and Bansko is the Monastery of St. Panteleimon. The holy monastery was built in the 20th century on the site of an older monastery, which was completely destroyed.

According to local legends, the beginning of the construction of the monastery gave a dream. A man from the nearby village Obidim had a prophetic dream in which he was told where to go to dig to find the icon of the HolyVirgin.

He decided to check, went to the place indicated in his dream and really found not only an icon, but also other church attributes. Thus, the local people of Obidim and Dobrinishte decided that a monastery should be built on this place. Today the monastery is active, feminine and if you visit it, you will be warmly welcomed and told a bunch of interesting stories, including the incredible story of the miraculous discovery of the healing water source the monastery.

To get to the monastery, you have to go to Dobrinishte and from there go in the direction of GotseDelchev hut. On the way you will see a small chapel, which you have to stop and walk on the path to the monastery. The distance to the monastery is about 4 km, but the trail is of low difficulty and you will not feel when you will face the gates of the Obidim Holy Monastery.