Vihren Mount is the highest peak of Pirin Mountain and the second highest in Bulgaria after Musala. It is located between the rivers Banderitsa and Vlahinska, while its height of 2914 meters above sea level challenges both mountain tourism enthusiasts and experienced mountaineers.

Below, you will see the best hiking trails leading from Bansko to the Vihren summit: rich in stunning climbing trail gems and breathtaking views around the Pirin National Park. 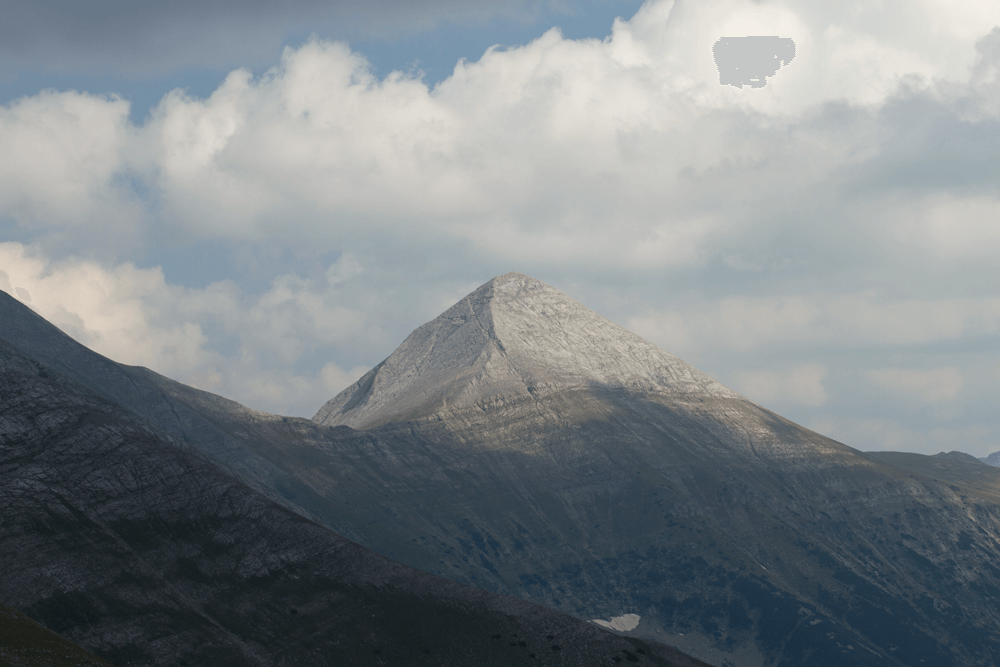 Before you start exploring the routes from Bansko to Vihren, it would be wise first to plan your overall mountain adventure, starting from the very fundamentals.

The best “base” to start climbing is the town of Bansko. On the one hand, the resort town offers good accommodation, restaurants, and attractions. On the other hand, it is the closest village to Vihren hut, where the climbing route starts.

Advice: prices of hotel rooms in Bansko are pretty cheap during summer, so if your schedule allows it, it would be nice to stay a bit longer in town.

Thus you could go sightseeing Bansko and have a good rest both before and after climbing Vihren Mount. You are guaranteed to have a great holiday with an added extreme climbing of one of Bulgaria’s most beautiful mountain peaks in Bulgaria.

The best season for climbing Vihren Mount is between July and the beginning of September but even if you chose that exact period for your visit, check the weather before you start climbing.

If forecasts predict rain or fog, you’d better wait for a day or two before you begin hiking. In the meantime, you can have some fun around town, visit Bansko attractions, or go sightseeing.

Do not try to climb Pirin’s highest peak in inappropriate weather, as it could be dangerous!

When planning to conquer the Vihren peak, prepare some suitable equipment – reliable mountain shoes, a long-sleeve blouse and trousers, and a light jacket to stop the cold wind persistent on the top.

It would also be wise to have good water and food stock, and don’t forget to take a good camera with you. Finally, it’s recommended to have a warm hat and a pair of gloves in your bag – believe us, you will need them on the top of the Pirin Mountains. 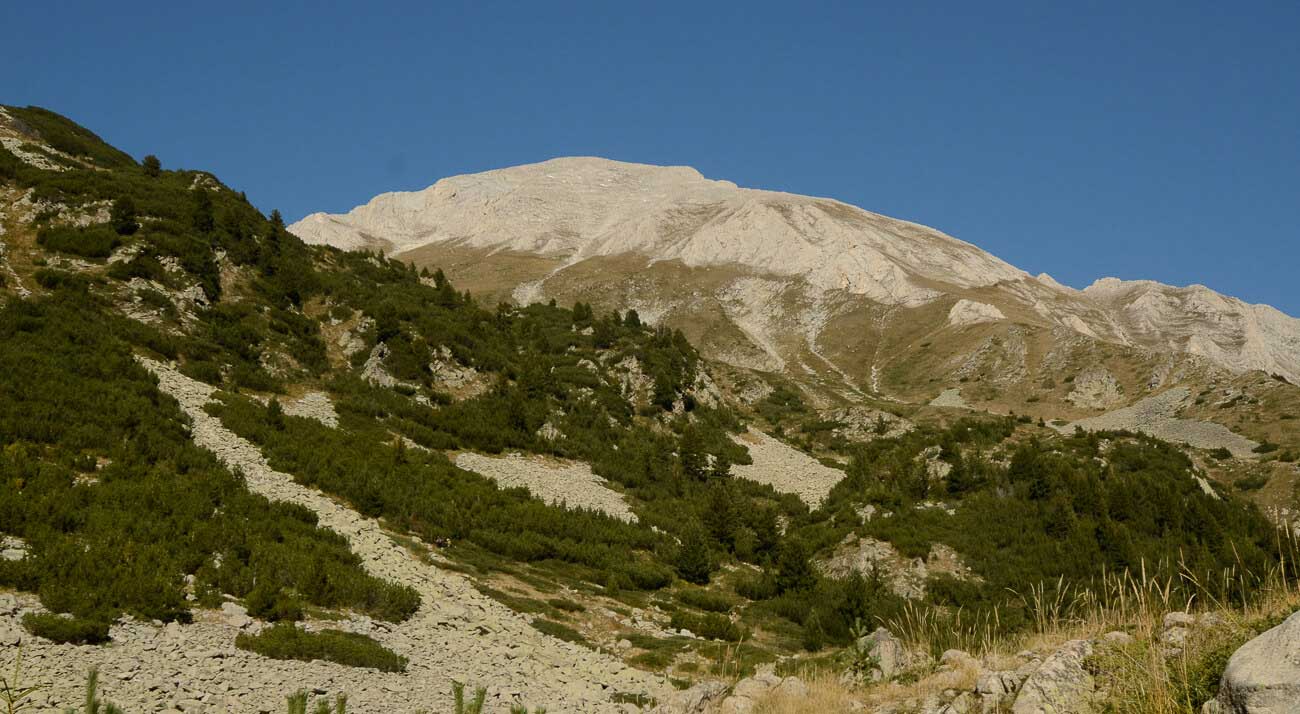 The climbing routes from Bansko to Vihren Mount are two – one on the south slope (the classical one) and another on the north slope.

The classical route is suitable for basically every mountain lover. We recommend it to people who are not accustomed to climbing, or their physical preparation is not good enough.

Reaching your final destination through the classical route will go as follows.

The town of Bansko – Vihren Hut

The starting destination of the route is the town of Bansko. From the city, you should reach the Vihren hut – the initial point of the trail – by car.

The distance between Bansko and the Vihren hut is about 18 km, so if you have planned a single-day climb, you have to wake up early in order to have enough time.

The road to the hut is good, but there are many turns, so you will need at least half an hour to reach it. Parking next to Vihren hut can also be a problem because there are few parking lots.

Therefore, if you notice parked cars on the sides of the road to the place, don’t try to reach it; you’d better also park there.

If you have a tourist book, there is a seal in the hut. You can also get it sealed in Bansko but you have to know that the two seals are different.

The climbing to the peak literally starts some meters away from the hut Vihren. Follow the marking – white-red-white for the classical route – and after approximately 30 minutes of climbing along a narrow rocky path, you will reach a “fork” where the path splits in two.

The classical route continues to the left. The right one passes through Kazanite and is far steeper and more dangerous, so be careful not to go the wrong way.

This stage is probably the easiest and the most beautiful of the whole route. There are some steep and rocky areas, but there are plenty of resting spots, and the landscape is incredibly beautiful.

If you don’t press yourself to hurry, you will complete this stage in an hour or an hour and a half.

When you get to the Kabata saddle, have a longer rest because the actual climbing to the Vihren top starts there. You would need about 15-20 minutes to reach the foot of the peak, and then the harder part begins.

The way up the hill is steep, reaching a 45º gradient in some areas, so be careful. Advance slowly, have short rests, and in an hour, you will reach the goal – Vihren Mount.

When you reach the top of Pirin Mountain, all the minor inconveniences of the whole route will lose their significance. The views before you will be hard to describe. If the weather is good, you’ll see Pirin Mountain in all its glamor, along with Koncheto, Kutelo, Rila Mountain, and Malashevska Mountain, which are also nearby.

The time required to reach the top is approximately three to three and a half hours depending on your physical condition. 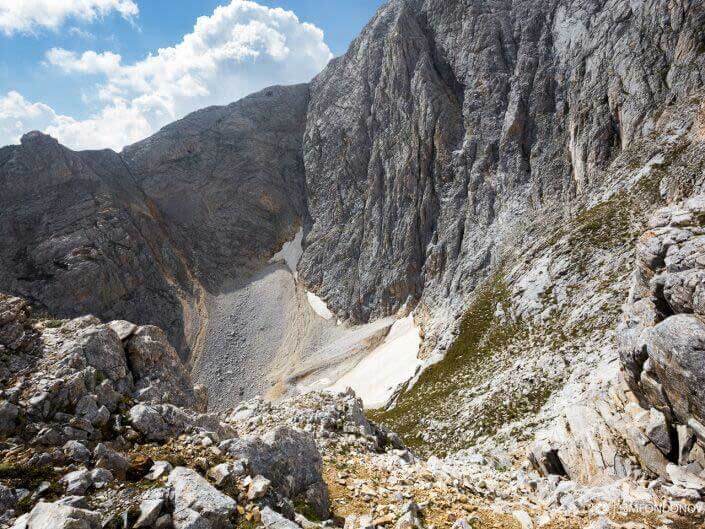 If you are an experienced mountaineer, you can opt for climbing the route that reaches the peak from the north slope. This pathway also begins from the Vihren hut. It overlaps with the classical route until the “fork” where this one goes to the right – through Kazanite – instead of going to the left.

Consider that while the path of the classical route goes around the peak and is therefore much easier, this route leads you through fairly steep segments. So, you should be really well-prepared before choosing this option.

Once the stage is completed (it will take you at least an hour), you have to make a sharp turn and walk along a steep path cut into the rock that will lead you to Kazana shelter.

There, you can stop for a short rest and enjoy the views of the permanently snow-covered areas, Vihren Mount’s walls, and Kazanite cirque.

Kazanite are two cirques – the Big one and the Small one. They are lying between the Premkata saddle and Vihren and Kutelo peaks. Their name (“Cauldrons”) comes from the fact that they look like big cauldrons. Their slopes are steep, and there is a permanent snow area on the bottom of the Big Kazan.

The path continues through Kazanite. Keep in mind that you will have to climb nearly vertically in some parts of the route, and you may need to use all four limbs. In 10-20 minutes, you will reach the saddle that separates Vihren and Kutelo mounts.

At that point, you can choose whether to continue to the Vihren summit or to turn and reach two other beautiful mountains’ peaks – Kutelo and Koncheto.

If you aim to climb Vihren, you have to turn to the southwest and start the actual climbing to the top. The terrain is steep, and the rocks and marble are slippery, so you should be very careful. Nevertheless, continue along the path, and in 40-50 minutes, you will reach your final destination – Vihren Mount.

If you are in good physical shape, you could also make a longer hike by climbing up the peak through the classical route (south slope) and going down the north slope through Kazanite, Kutelo mount, and Koncheto before getting back to the Vihren hut. 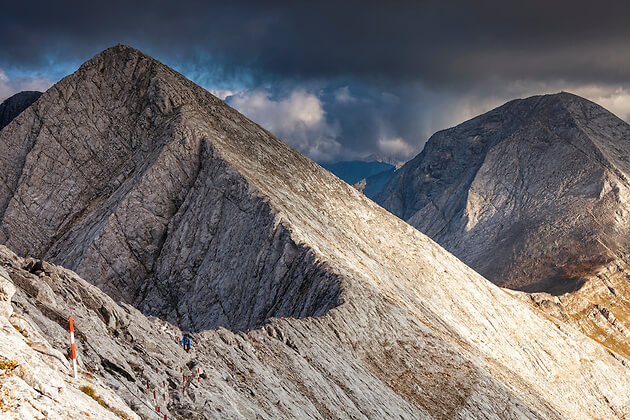 This route is not appropriate for people who are not experienced mountaineers or are afraid of heights. The trek is approximately 5-6 hours long, and the terrain is hard. If you don’t feel completely prepared, you’d better avoid it.

If you decide to do the trek anyway, these are the stages.

Vihren hut is the starting point. From there, follow the marking of the classical route, and in about 3 hours, you’ll reach the top.

Premkata saddle is more than one kilometer long, and some places are hard to cross. There are steep areas that require both climbing up and down hills of big gradient.

The saddle is amazing also because one of the most beautiful mountain flowers grows there – the edelweiss. You can stop for a rest and take some pictures, but don’t pick edelweiss because they’re protected species.

The trek between Kutelo Mount and Koncheto is not easy, so don’t underestimate it. The path is extremely narrow, sometimes scary, and with no gondola station to get you down quickly. There are very useful metal ropes at the steepest places but you should be careful even so.

You will reach Banski Suhodol Mount in an hour or an hour and a half.

Once on the top, you can choose between several routes for climbing down – to Banderitsa hut, Yavorov hut, or Vihren hut.

If you decide to descend to the Vihren hut and you are not too tired yet, you can spend some time visiting the Baikusheva Mura, which is only 200 meters away from the place. Just look around for a sign around the hut and follow the path to the spot.

Baikushevata mura (a white fir) is approximately 1300 years old and it is worth visiting even if it’s not exactly part of the route to Vihren Mount.

And a Little Adrenaline Rush Addition…

If your passion for extreme experiences is not satisfied even after you pass through Koncheto, you can also try Koteshki chal.

Koteshki chal is an area perpendicular to Koncheto, and crossing it is very intense. Passing through Koteshki chal is possible without equipment, but it is dangerous, so think twice before deciding to do it. If you are not well prepared, our advice is to forego this adrenaline rush adventure.