For those of you who haven’t heard, Melnik is the smallest town in Bulgaria. It is located at the southwestern foot of Pirin mountain. It is a typical small mountain town with a population of 385 people, located in a picturesque area in southwest Bulgaria, 22 km. southeast of Sandanski, Blagoevgrad region. 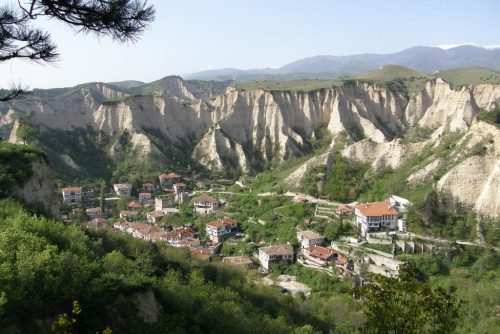 The small attractive town in national revival style is nestled in the embrace of Pirin mountain – one of the most beautiful mountains in Bulgaria. Close to Melnik there is one unique natural phenomenon. A direct path from the town leads to the sight Melnik Earth Pyramids. This is another wonderful place in our list of Bulgarian sights, which every Bulgarian has to visit at least once in a lifetime.

The Melnik pyramids are of great interest for Bulgarian and foreign tourists and this is not by accident. Such a natural phenomenon is a rare occurrence in the entire Balkan Peninsula, as well a proof of the power of nature and its capabilities to create such beautiful landmarks. These pyramids are one of the most impressive natural landmarks in Bulgaria and are one of the most visited rocky pyramids in the country.

The pyramids impress with their huge size, their steep slopes, and the breathtaking views from above, and due to these reasons they are so magnetic for the tourists. This fact has imposed the need of construction of holiday houses and other buildings in Melnik to accommodate the flow of incoming tourists, curious to see the the impressive natural phenomenon.

In addition to the rocky pyramids, the region can reveal as well a variety of other rock formations, such as rock mushrooms, needles, cones and other natural formations with unusual forms and look.

What is the geological structure of the Melnik Earth Pyramids?

The Melnik Earth Pyramids, by themselves, are an interesting natural phenomenon that attracts the interest of thousands of tourists from Bulgarian and the whole world. The pyramids in Melnik are considered to have formed this way after a process of errosion of clay soils in the region. 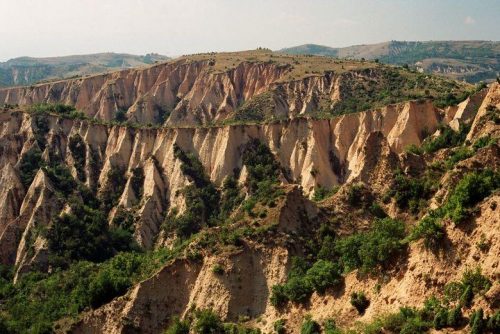 The Melnik Earth Pyramids are rock formations with vertical walls, extending over an area of 50 sq. m. They are made of rock-sand material.  From a geological point of view, the region of Melnik consists of gray-white Pliocene sands, mixed with clayey layers. This earth layer of clay and sand actually was the sludge at the bottom of an ancient shallow lake, with huge size, which existed 4-5 million years ago. It was located in the today’s hollow of Sandanski and Petrich.

After a long time, due to the folding of the earth mass, caused by the movement of the continental plates, the mountain massifs Pirin, Ograzhden and Belasica occur. As a result of their rising the waters of the ancient lake start to drain in southern direction. Rock material began to accumulate in the newly formed hollow, which started sliding down with the help of the local mountain rivers and streams. Thus, on the deposited sandy layer which has remained from the lake, was formed a thick driftage layer with thickness of 500-600m, made of very slightly bonded reddish in color sedimentary rocks.

So, with thousands of years passed, sedimentary rocks have accumulated on this layer of earth, which consist of rock-sand material, coming from Pirin mountain, whose thickness reaches 120m. Finding its way through the accumulated rock mass the running mountain waters formed deep valleys and glens, which causes the creation of various rock forms.

Furthermore, besides the movement of water, under the influence of corrosion processes, caused by the power of winds, storms, as well the cold and hot climate for the region, interesting natural formations have occurred, which look like mushrooms, ancient pyramids, church domes, swords and other.

The height of the Melnik Earth pyramids reaches up to 100 m. A characteristic feature of this natural formation is that the slopes of the pyramids are made of sand and there are places where the pyramids are almost entirely vertical.

An important fact is that the Melnik earth pyramids are in a process of being shaped, and their appearance and form are changing over time.

The Melnik pyramids are really a unique creation of Mother Nature. They look like natural sculptures that were made by human hand, which reveal picturesque views of the entire region. The structure of the Melnik pyramids is quite varied – there are many different shapes and forms.

A curious fact about them is that they are in a continuous process of natural shaping and their form and appearance change over time, under the impact of the natural processes.

The natural phenomenon – the Melnik pyramids fascinate every visitor and definitely awakens the imagination.

For a long time the pyramids in Melnik have ignited the imagination of every tourist who has seen them. In appearance they can be likened to a variety of things. The pyramids look like mountain peaks, alpine ridges, rock mushrooms. Some people even say that they look like Egyptian temples and pyramids,  obelisks, domes of Gothic churches, even swords, minarets, haystacks, and other.

Another group of pyramids of the most popular ones in Melnik, is located in Karpanovo village, Blagoevgrad region. They are four in number and they are quite impressive. They look like blades or obelisks, with height of more than 100 meters. They have bare steep slopes without any vegetation, their peaks have flat surface. They are covered with low grasses and at some places trees can be seen. The characteristic for them rock “hat„ is the reason why the sand-rock material of the whole rock structure is strong and resistant to the natural destructive processes.

What is Melnik famous for?

Despite its small size, Melnik impresses with its western architectural style from the Bulgarian revival period. Its popularity is not limited only to the fascinating sand pyramids. In the town there are also 96 buildings from the revival period that have been declared cultural monuments. In fact, the whole town of Melnik is architectural reserve. Moreover, it is located a few kilometers away from the Rozhen monastery – the biggest Orthodox temple in Pirin mountain.

Other interesting sights to see in Melnik:

In addition to the famous sand pyramids, Melnik can offer more places to intrigue every tourist.

An interesting fact about this house is that it is the biggest house from the revivial period in its size on the Balkan Peninsula. The house is also known as the Tzintzarova house and it is located in the eastern part of Melnik. It is in close proximity to the Bolyarska and Pashova houses. It was built for wine storage, as well for wine production and trade. 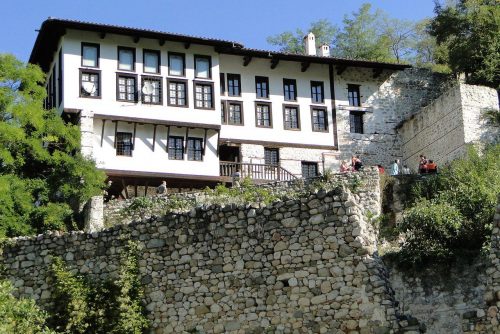 The house has been preserved in its authentic form until today. Currently, it has become a museum house with four floors in total. It was built according to the traditional revival architectural model.

It consists of a ground floor with a basement dug in the rock for wine storage, a living floor that serves as a residence with a summer terrace. Two of its floors are made of stone. There is an exhibition where gigantic barrels for Melnik wine are presented, as well murals and carvings in Venetian style, and stained glasses and original cupboards.

The wine cellar itself is a rock tunnel with length of 150 m. It is equipped with ventilation system and also has a special system of narrow and low corridors. The biggest barrel in the wine cellar of the museum house can bear 12,5 tons. It is considered that the cellar can store up to 300 tons of wine.

The Kordupolova house was owned by a wealthy Greek family of merchants called Kordupolous. Manolis Kordupolous was actually the last known member of the family. He received specialized education in wine production in France. Subsequently, after returning to his native lands, he has developed the wine industry in Melnik, introducing the modern way of quality wine production.

Another curious fact about him is that he gave shelter in his house to Yane Sandanski, in the period preceding the Balkan War. The Kordupolova museum house is included in the list of the 100 national tourist sites.

The Bolyarska house is another example of the traditional architectural genius that reigned in the town of Melnik during the middle ages. It was built in the first half of the XIII century. It is a symbol of the architectural art in residential buildings during the Bulgarian medieval period, and the house was declared a cultural site of national importance. 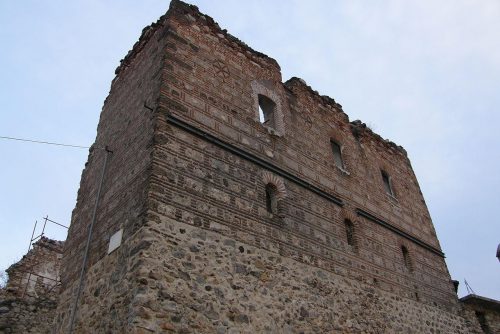 During the middle ages until the XV century, at its place was situated the center of the suburb of Melnik. The Bolyarska house was used as a home until the beginning of the XX century. After that it was left to ruin.

The rock mushrooms near Rozhen

To the south of the Rozhen village are located thousands of rock mushrooms of large and small sizes, which are an impressive attraction for the tourists. Anyone who wants to learn more about the phenomenon called Melnik earth pyramids, can visit the Tourist Information Center in the town of Melnik, for more information about this landmark and the entire region. 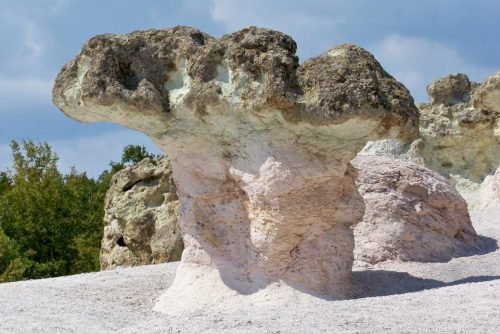 Another popular fact for Melnik is its developed wine tourism and centuries-old traditions in wine production, dating back to the Bulgarian revival period. An example of a place where everyone can taste authentic Melnik wine is the guest house Shestaka. This house offers authentic revival atmosphere and selected wine varieties from the famous family of producers of wine in the region. Thanks to their production, we can enjoy the aromatic Melnik wine. 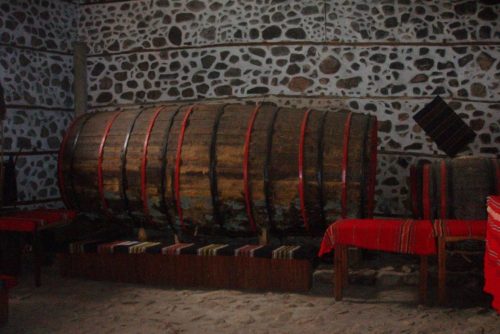 The small and beautiful town of Melnik has gathered eight churches and monasteries, one historical museum, as well many works of the architectural art of the times of revival, and all this fascinate people with its preserved look.

Despite its small size, in Melnik you can’t be bored, there are places for both natural beauty lovers and gourmet travelers who want to taste something authentic and Bulgarian.