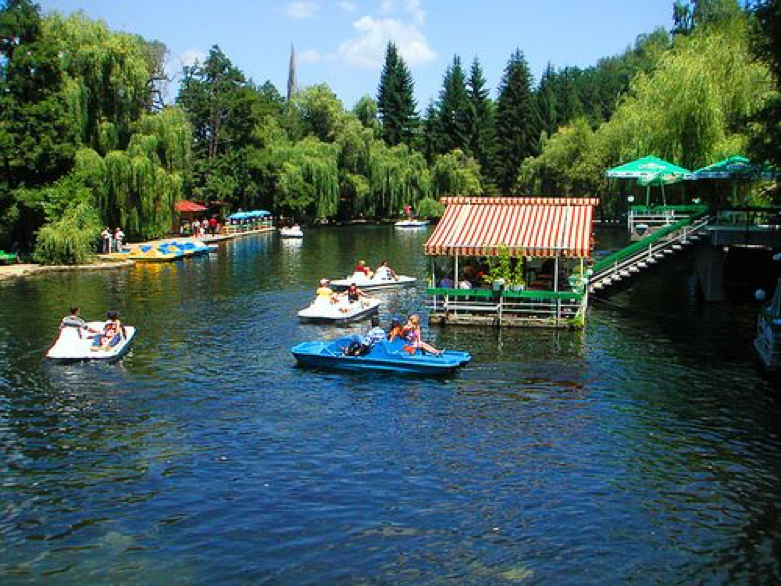 If you love nature and you are looking for new adventures,then don’t miss to visit the Kleptuza dam in the town of Velingrad –a beautiful place in the Bansko region. Itis one of the most impressive and mysterious natural places in the mountain of Orpheus, which are worth seeing. There is no doubt that the dam has become an emblematic place for the town and is always associated with its name.

Kleptuza is a protected area that is situated on the right bank of Chepinska River, which is located near the mountain slope in Chepinodistrict, Velingrad. Chepino is one of the three thermal areas of Velingrad. The place is definitely filled with mysticism and brings a sense of romance to everyone who visits it because of its beautiful green sceneries. It is surrounded by lush greenery, which is a prerequisite for complete relaxation in nature.

The lake is surrounded by lush vegetation, and as a place to which you navigate, you have chosen a site that is very easily accessible from the town and it provides a beautiful view to the lake.

Its exact location is in the south-western part of Velingrad, asto the left is the National road III-843 and the trails of narrow gauges Septemvri – Dobrinishte. The place is declared protected and covers anarea of 412 hectares in total. Kleptuza is one of the symbols of Velingrad.

The region around the Karst spring Kleptuza,which occupies an area of 412 hectares, was declared a protected natural landmark in 1966. It is supposed that the name of this place comes from the Greek word “klepto”, which means to hide, to steal. So this gives an idea of the huge amount of water that is located beneath the bowels of the spring.

The Kleptuza spring has a very interesting history. In the area of today’s ennobled park, the waters of the spring have flowed into the Chepinska River until 1932 as it is located nearby. In the place of the two lakes there was a swampy meadow in the past,and below it – the bed of the river. In 1937 the lakes were created thanks to the voluntary work of local residents and the materials donated by the municipality.Trees were planted, alleys were built, as well as stairs and observation platforms. 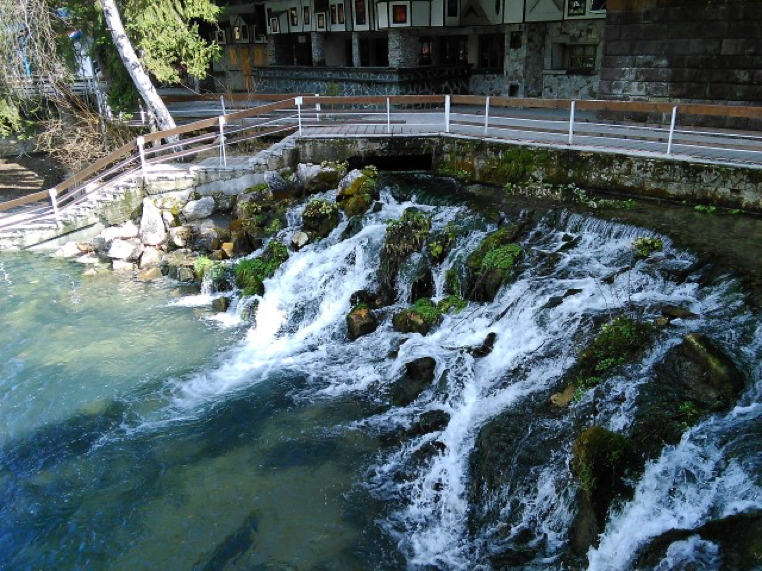 Information about the spring

Kleptuza is the largest Karst spring in Bulgaria. It gathers waters from a vast area with karst marbles. It has a capacity of 270-1020 dm³/s, which is highly variable. Its underground waters come out to the surface from three places in a fault, in which the bed of Chepinska River is situated.

The water of the spring is relatively hard, crystal clear and cold with a temperature of8.1°C. The water of Kleptuza is suitable for drinking. Much of the same water is used for drinking purposes. Part of it is captured and is used for water supply of Velingrad.

The rest of the water supplies two beautiful artificial lakes, and then it drains to Chepinska River.From there, the waters of the spring reach Maritsa River and the Aegean Sea. To the south from the karst spring there are evergreen pine forests that have been transformed into a natural park that is usually visited by the residents of the resort and by its visitors, mostly during the summer season. The park was built with own funds provided by the former village municipality of Chepino village – Banya, as the first lake was established in1933.

The water of the dam springs crystal clear and the weather conditions doesn’t affect at all its temperature. The temperature remains constant during the summer and winter periods –8 degrees Celsius.

In the region of the protected area Klpetuza can be seen more than 285 plant species, as 260of them have curative properties. The black pine is the main tree type that grows there. In the area are also growing about 50 tree, shrub and perennial species – rare, endangered endemic species from the Balkans such as:

Besides the Kleptuza Lake and the park, the territory of the protected area of Velingrad includes also the „saint Elija“ chapel, which is located in the Markovi rocks area, as it is aThracian cult sanctuary. An interesting fact about Kleptuza is that its territory is crossed by the 24 parallel and 42 meridian – the only crossing point on the territory of Bulgaria, as this makes it a place of great importance.

Kleptuza is also a starting point for a number of marked paths leading to Hermanite, Brezi, Sivata voda and to other areas.

The legend of Kleptuza that is passed from generation to generation delivers a message of pure love. Once upon a time there was a local girl called Klepna. She was known as the most clever and beautiful girl of the Uza family. Just like every other girl, Klepna kept her love for the beloved in secret.

Their love was very strong. They dated secretly in the forest. But one day the family of Klepna decided that the time to marry her has come. However, the choice of a man made by her family wasn’t the same as hers. They decided to marry her to a wealthy man from a rich family living in the neighboring village. He was a rich man, but he was cold and heartless.

When Klepna learned about the choice of a fiancé that her family made, she ran away to her beloved as she couldn’t accept the fact that she have to marry a man that she doesn’t really love.Her beloved wanted to run away with her far away. In order to meet her man the girl had to cross the forest. But the forest was dark and difficult to cross. While the girl was walking through it she met a horde of enslavers. When they saw the beautiful girl they started chasing her. Klepna startedrunning but in the end they reached her.

In the very moment they were already very close to her, she prayed to God and she said that she rather prefer the earth to devour her than to be caught by the enslavers. Her prayer was answered. Suddenly the earth under her feet opened and the girl instantly vanished.

After she was no longer there, before the eyes of the horde, water started to gush from the place where she stood a moment ago. This water drowned the horde of chasers. So this water continues to flow to the present day.

That is why the dam was named after the girl of the Uza family. When a person visits the Kleptuza dam, he always can feel the extraordinary mystical beauty and magnetism of this natural phenomenon.