Nicopolis ad Nestum is an ancient Roman city, which literally means – City of Victory at the Mesta River. The location of this landmark is in southwestern Bulgaria. According to archaeological research, the city existed in the period II-XIII century, which is equivalent to the era from Antiquity to the Middle Ages.

This is one of the few ancient cities in Bulgaria that are partially preserved. Even more impressive is that it is the only city in the Rhodopes that dates back to Roman rule. That is why it has been declared an archaeological and architectural monument.

Historical records say that Nicopolis was founded in the very distant 106th year by the then Roman emperor Trajan. The newly created city was located on the site of the Thracian settlement – Alexandroupolis, and the purpose of its creation was in honor of the victory over the Dacians.

Its location was not accidental, as the city was located on a very strategic road that connected the Aegean coast with the main military road – Via Egnatia, through the Thracian lowlands, the Rhodopes and today’s Plovdiv.

This in turn allows it to be a center of political and economic influence in its heyday from the II to VI century. In terms of economic development in Nicopolis were minted mainly coins dating from the time of Emperor Commodus.

In the interest of truth, these coins aredirect testimony to the religious worship of various deities by the inhabitants of that time. A typical example of the gods are – Zeus, the Thracian horseman, Ares, Dionysus and many others.

Although the city was an episcopal center from the 4th to the 11th century, it was completely destroyed by Slavs and Avars in 577. Fortunately, under Justinian I, its foundations were rebuilt and reinforced with even better fortress walls.

Its walls were the thing that set it apart from all other cities at the time. According to research, the city was surrounded by a wall that was 2.40-2.60 m thick. Of all the discoveries, the southern fortress wall was the most studied. It is built with round towers, numbering four in number.

In the period IX-X century, the settlement existed under the name Nikopol, while in the XIII century it was completely lost during the Crusades.

Ottoman slavery did not fail to leave its mark here as well. During this time, there was a settlement in the area called Nevrokop, which represents the Greek name Nikopolis only in Turkish form. Over time, its location shifted in the direction of Gotse Delchev.

Unfortunately, in 1878, when the Liberation of Bulgaria took place, the town remained in the territory of the Ottoman Empire. However, it did not take long for him to be released, as he did during the 1912 Balkan War. It is an interesting fact that Peyo Yavorov has been announced as the first mayor of the city.

How to get to Nikopolis ad Nestum?

To the surprise of many, the archeological site is located near the village of Garmen (Blagoevgrad region). If you are in Bansko you will need exactly 50 kilometers to reach it. The car is a top priority for this trip.

Total distance from other major cities:

Once you arrive in the picturesque village of Garmen you will be provided with free parking next to the complex. Inside the site, you will have complete freedom to view various remains of buildings, fortress walls, aristocratic villas and baths, which were used by the then inhabitants of the ancient city.

Please note, however, that there is also a visitor center in the complex, where you will have to pay an entrance fee to be admitted inside. There you will be able to enjoy an intriguing talk about the origin and ancient history of the region around you. 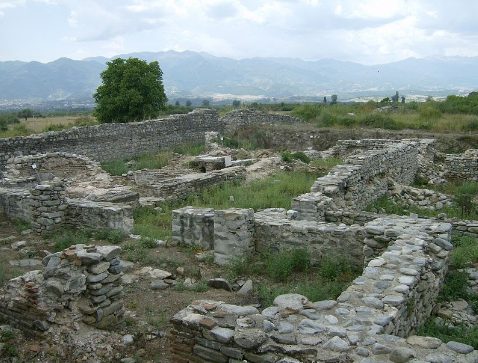 What heritage has the city left?

The city has left a rich cultural heritage that each of us should be proud of. Today it is an attractive place to visit by tourists and lovers of Bulgarian history. If you have not yet visited it, we strongly advise you to take time off work and go there with your family.

The discovered remains are like a “time machine” and will literally take you back so that you can get the most out of how people inhabited our lands thousands of years ago. In addition, you will be greeted by unearthly beautiful views coming from the GotseDelchev valley.

Excavations in the area have been carried out since 1980 until today, and more and more finds continue to be discovered. At this stage, according to experts, the earliest finds are from the Neolithic period. Of all, however, the greatest interest prevails around the late antique bath and the churches in the ancient city.

The bathroom was defined as a public bathroom of block type. According to the latest research, it was built in the IV century, but later it was burned down along with the whole city. Fortunately, however, it was restored, with gold coins in the form of Emperor Zeno directly testifying to this.

As we have said, the ancient settlement also had churches, which were actually three in number. Two of them have a three-nave basilica, while the last one was open. Researchers also found two tombs and various murals.

In summary, we can mention the fact that this is a really interesting and magical place. The archeological site still has a lot to offer, as it predisposes to new discoveries.

That’s why it’s worth taking the time out of your daily routine to visit it and enjoy it all. In case you have energy for more adventures after the walk, we strongly recommend you to visit the nearby villages in the area, the most famous of which is the village of Leshten.