Varosha Revival Complex became a district of the town of GornaDzhumaya(the old name of Blagoevgrad) during the Renaissance. It is located in the central part of Blagoevgrad, located on the left eastern bank of the river Bistritsa, at the foot of Delvin Hill.

Today, the Varosha Revival Complex represents the old part of the city, reminiscent of the past. 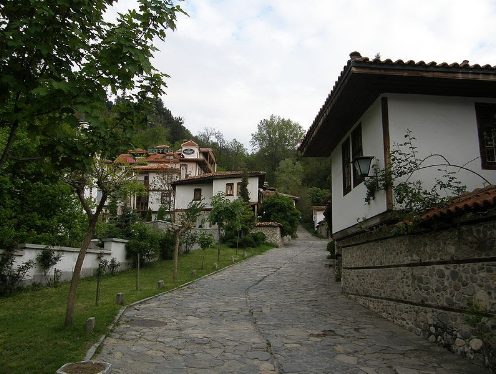 The word “varosha”originates from the Old Bulgarian language and literally means “old town”, as is the ethnographic complex today. There are several neighborhoods in Bulgaria that are named Varosha. One of them is right in Blagoevgrad.

Its construction began in the XVII century, but was finally completed in the early XIX century. Its appearance is typical of the Renaissance, as it was typical for that time.

The Varosha Revival complex started from the east of the Mitemark House, which no longer exists today, and reached the western part of the town, where the market is now located.

The neighborhood has a street known as Syarskoto Jade, called Charshiyska Street, and today it is named “Alexander Stamboliyski”. The ethnographic complex was then connected to the Turkish part of the city with the help of three bridges – the Bazaar, Church and Butcher Bridge. Unfortunately, these three bridges are now in ruins and not a historic part of the city.

The houses that were built when the neighborhood was created were small and single-storey. A little later, the typical Revival period began to appear, and by the end of the 19th century the architecture was modernized and the houses built had a more urban look.

Initially, the population in the neighborhood was mixed, there were both Turkish and Bulgarian residents. A little later, the complex became the only neighborhood in the city where only Orthodox Bulgarians live.

The households in the Varosha neighborhood were about 200 families. What characterizes and distinguishes it is that during the Renaissance, the ethnographic complex was a place that brought together all the prominent and best teachers and cultural figures for the region of GornaDzhumaya. They were active participants in the struggle for the Liberation of Bulgaria.

In 1844 the church “Holy Introduction of the Mother of God” was consecrated. The church was built thanks to 200 volunteers, all Bulgarian Orthodox Christians, all people and families who lived in this neighborhood.

The church is a three-aisled basilica, decorated with a carved iconostasis and artistic paintings. The iconostasis in the church is considered to be one of the most masterfully made in the whole country, resembling the one in the Rila Monastery.

All this thanks to extremely talented representatives and painters of the Bansko and Samokov schools. In addition to all this, the church has always been a religious and cultural center for the city, as well as for the Diocese of Nevrokop.

It is also important to mention that in the middle of the 19th century a secular school was opened in the churchyard. Later, a monument to Nikolai Pavlovich Orlinsky was created. He was a Russian commander who assisted in the first liberation of GornaDzhumaya.

Characteristics of the complex and what place it occupies in history

The Revival complex “Varosha” to this day carries the breath of the past, the times under Turkish rule and those during the Liberation. Preserving its history and its spirit, it is a place worth visiting.

The narrow cobbled streets around the neighborhood are reminiscent of those times when shops worked, there was a craft, people worked and life boiled, and education and culture were at a high level and prominent figures contributed their knowledge.

As these houses grew old and began to crumble over time, restorations were carried out in the 1980s to preserve their Renaissance appearance.

Today, there are only two privately owned houses in the Varosha neighborhood. All the others have become workshops, centers for art, ceramics, painting and other activities related to crafts. It’s one of the things that keeps the neighborhood’s history alive and reminds me of everything at the time.

Excursions and why it attracts tourists?

What attracts the Varosha complex is precisely the spirit of the Revival, which also carries the history it preserves. In the Varosha district, in addition to the beautiful church, which is a cultural monument of national importance, you can also see some of the most famous Revival houses.

Izmirlieva House is actually a Revival building, which today is a museum house. It was the birthplace of the revolutionary GeorgiIzmirliev – the Macedonian.

In 1976 it was restored on a model so as to preserve the history it carries. The original wood-carved ceiling in the living room has been moved, and there are also original belongings of the Izmirlievi family. The house-museum tells the story of GeorgiIzmirliev, as well as his revolutionary actions.

In addition, we recommend that you visit the Regional History Museum, which together with the Revival complex “Varosha” are part of the 100 national tourist sites in Bulgaria.

In the museum you will find different areas that are part of the history of Blagoevgrad.

There is a legend that is related to the origin of the city and one of the main symbols of Blagoevgrad, namely the horse. It is alleged that many years ago there was a serious disease in the Blagoevgrad region that killed people en masse.

Residents of these areas decided it was time to move and find a more favorable place to live. For this purpose, they released a horse, which wandered for a long time, until it stopped on a green meadow by the river Bistritsa.

The population immediately decided that this was the place and so the future city of GornaDzhumaya began to be built. The horse is still a very valuable and important symbol of the city. That is why there is a sculpture of a horse, which is located at the lower end of Blagoevgrad. It reminds residents of the legend.

How to get to the complex of Lucky Bansko Hotel?

The road from Lucky Bansko Hotel to Varosha Revival Complex in Blagoevgrad is not long. It averages about 60 km, which is an hour’s drive. You pass Simitli and from there follow the signs to Blagoevgrad.

In addition, if you do not want to drive your car, you can use public transport. With it you have to get to the city itself and from there ask the locals to guide you on how to get to the Revival neighborhood.

We advise you not to miss the Revival complex “Varosha”, which has such a rich cultural and historical heritage. Especially since it’s so short. This is a place where you can go back in history and get acquainted with our past.