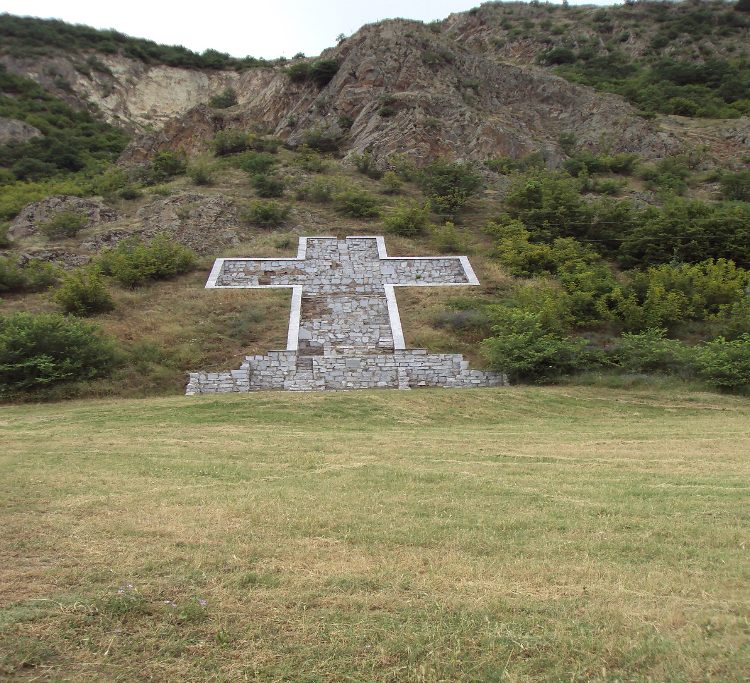 If you are looking for relax and recharging your batteries, we suggest you to visit the Rupite area near Petrich.

The area is located 10 km from the town and 2 km from the village of Rupite. It is located at the foot of the extinct volcano Kozhuh and is a strong energy place.

In 1970 Baba Vanga built her home here and treated everyone who came to her for help. The nearby church – monument “St. Petka Bulgarian” was built by her funds. 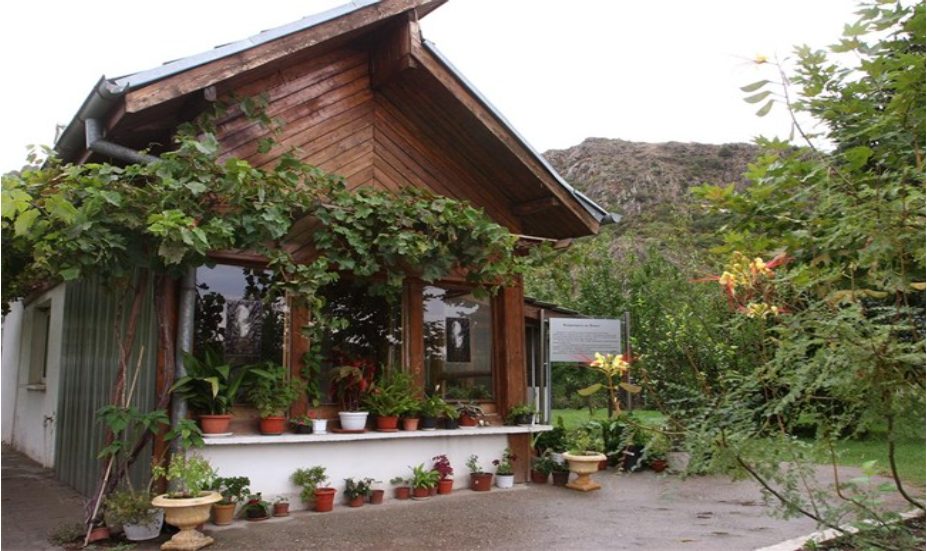 And just opposite the church, on the sloping slopes of the volcanic hill Kozhuh, there is a majestic sculptural object, to which we want to pay a little more attention.

The “Cross” is a sculptural object measuring 40 by 15 meters, built on the occasion of the 15th anniversary of the consecration of the church – the monument “St. Petka” in the area of Rupite. 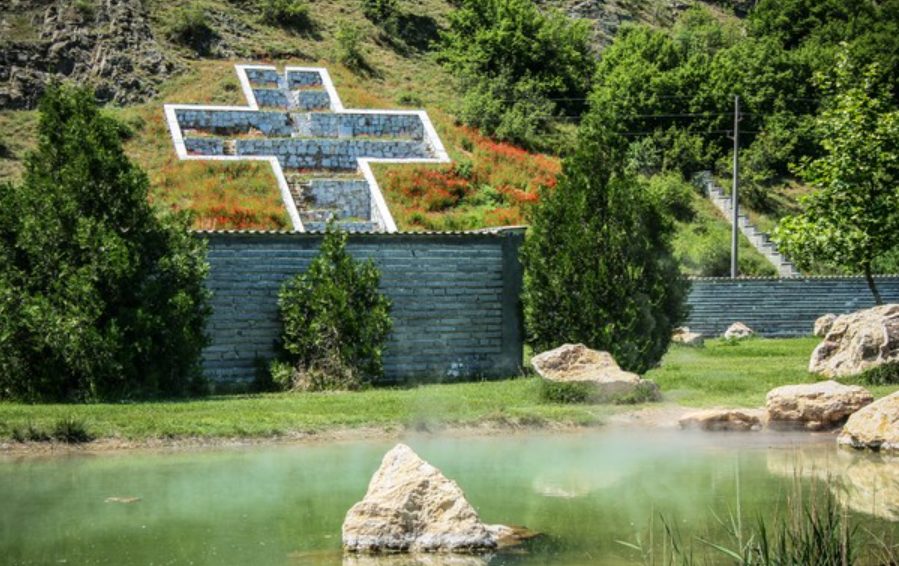 The story behind the construction of the sculptural composition is a little known, but very curious.

In fact, it began a few years before Baba Vanga’s death. Shortly before she died, the prophetess ordered a sign to be placed on one of the slopes of the volcano to honor the victims of its eruption.

Her wish was taken to heart by her fellow citizens, who collected donations for the project and for the construction of the sculpture. It was decided that the monument should be in the shape of a cross, but also they were clear that it should be built in such a way that people can climb it.

The composition and the realization are entrusted to the sculptor Ivan Rusev, who didn’t waste time and together with his team worked hard over the project.

It was not easy to accomplish such a large-scale project. The marble pieces and stones had to be pulled to the monument by an improvised elevator and then transferred and transported by hand from person to person. Despite all the difficulties, however, no participant in the project gave up and it was built in just three months.

Landmarks and attractions that are nearby

Today the area is landscaped as a park and it is a favorite place for walks for both locals and all guests of Petrich.

On the territory of Rupite you can see the house of Baba Vanga and walk around the small garden with flower beds, which are maintained with great love by the Vanga Foundation.

Just a few steps from the house you will see the church “St. Petka”, where you can light a candle and pray for health. You can also climb the steps of the “Cross” and enjoy the peace, quiet and beautiful views that will unfold in front of you from there. 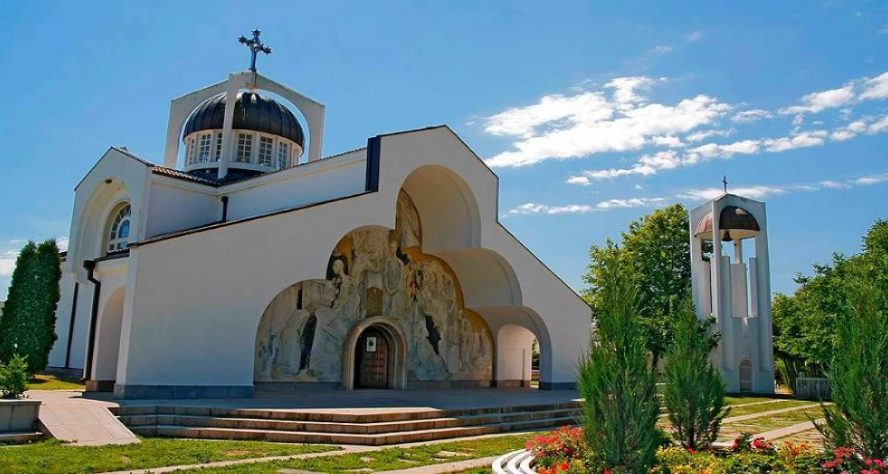 Then you can visit the makeshift tiny zoo, stand by the hot mineral springs that spring from the bowels of Kozhuh or sit in the inn and try the delicious homemade dishes offered there. 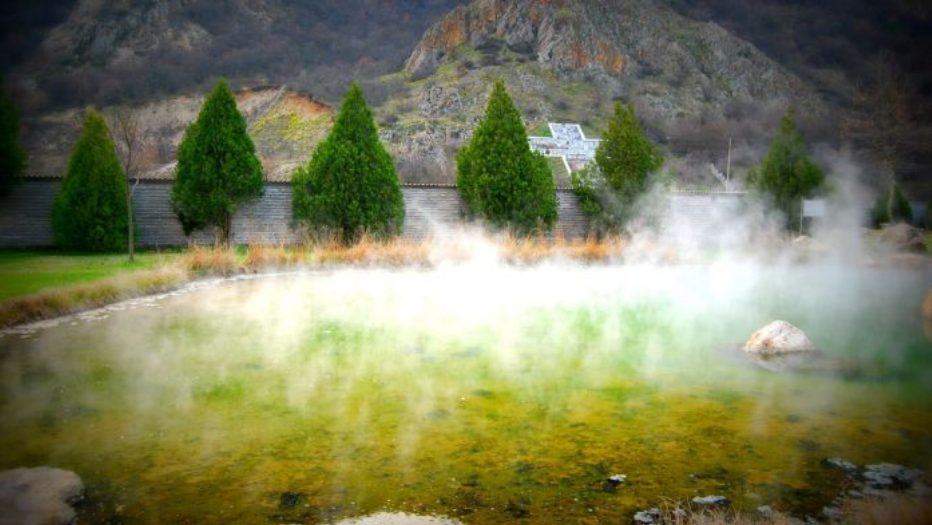 Or you can just relax on the grass and indulge in complete relaxation after seeing the main sights.

How to get to Rupite and Sculpture Sculpture?

The quickest and easiest way is to travel by car. If you go to Petrich, after leaving the city you just have to follow the signs (as we mentioned, the area is only 10 km from the city).

If your starting point is Sandanski, then you should take the direction of Kulata, near the village of Novo Delchevo to turn to Petrich and then follow the signs.

And if you are a guest of Lucky Bansko Hotel and decide to organize a day trip around the sights of Petrich and the surrounding area, from Bansko you should take the direction of Razlog, go through Dolno Osenovo, Simitli, Strumyani, Sandanski, at Novo Delchevo turn to Petrich and you know the rest.

Other sights not to be missed while in the area

Heraclea Sintica is an ancient city, which in ancient times was the central city of the region of Sintica. Its ruins are located only 2 km from the Rupite area, at the southern foot of the extinct volcano Kozhuh. 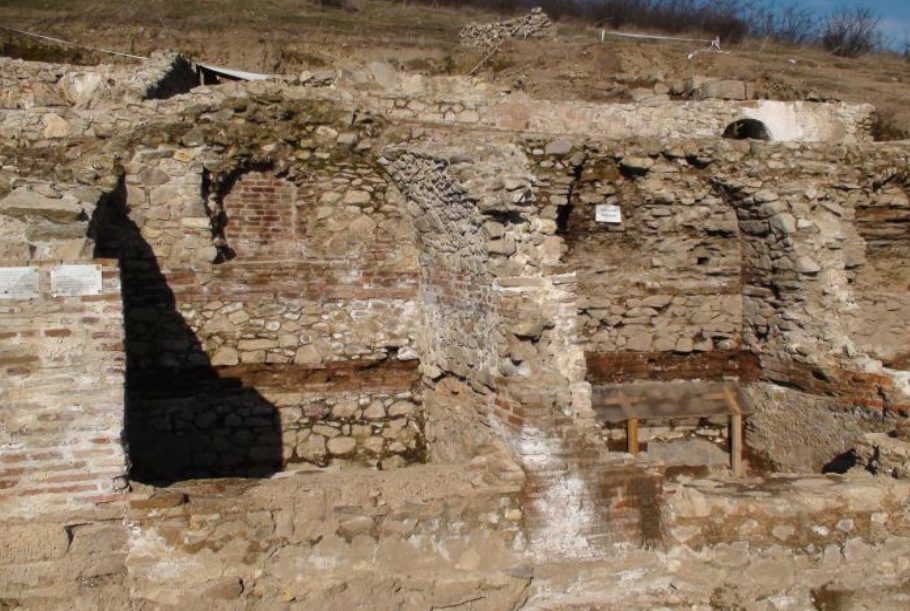 It was discovered by accident, after in 2002 Associate Professor Georgi Mitrev discovered a large inscription in Latin, which locates it.

Subsequent finds show that Heraclea Cynthia was a large and very modern city for its time and existed for nearly 800 years. (Archaeologists date its existence from the 4th century BC to the 4th century AD.)

According to experts, the city was probably founded and inhabited by the Thracian tribe Sinti, who give it its name. Initially, the ancient city was called only Cynthia, but after the father of Alexander the Great – Philip II conquered it and added “Heraclius” (by Heracles).

During its existence, Heraclea Cynthia was an important economic, commercial and cultural center, inhabited by people of different nationalities.

The city connected the Balkan Peninsula with the Aegean coast, Trakiya and Macedonia and was an excellent place for trade and living.

According to archaeologists, the ancient city was home to over 40,000 people, making it not only one of the most cosmopolitan cities in our territory, but also one of the largest of its time. 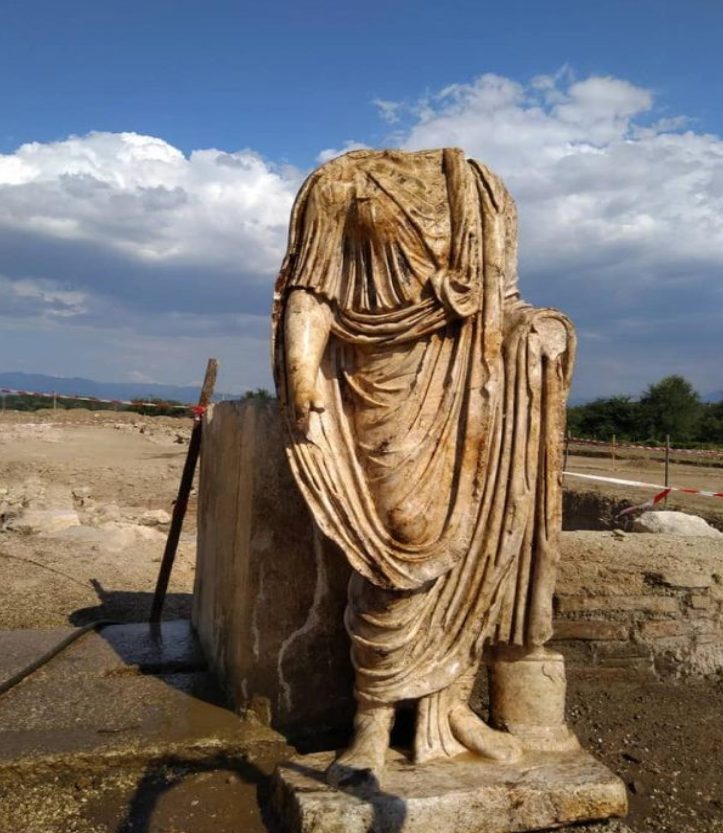 The size of the city can be judged by the two residential and craft districts discovered so far, parts of a Roman wall, several spacious squares, the most impressive of which is the central Roman square, a Roman forum, several basilicas and Christian churches and many remains of commercial premises. .

How to get to the ancient city?

As already mentioned, Heraclea Cynthia is located in the land of the Rupite area and it will take you less than 10 minutes to reach it.

In 2021, a new two-lane road was built next to the archeological site, which will take you straight to the city gates.

However, it is good to know that the site is open to visitors every day from 10.00 to 17.00, and the entrance fee for the visit is BGN 2.00 for adults and BGN 1 for students and retirees.

The monastery is located on the western outskirts of Petrich and is one of the most revered and visited places by both locals and guests of the city. 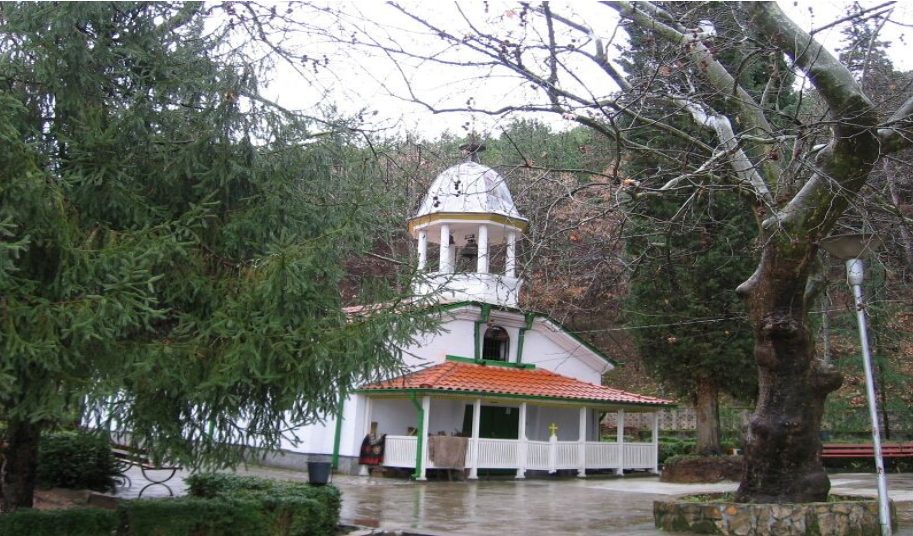 The construction of the holy monastery began in 1912, and the place for construction was not chosen by chance.

Legend has it that in Turkish times, a shepherd who grazed his sheep in the area saw a glow in the bushes that illuminated the whole area. The shepherd approached the light source and saw a small icon, with thorny branches entwined around it like a wreath.

Frightened by what he saw, the shepherd immediately told of the radiance of his Turkish superior, but he did not believe and ordered the poor man to be imprisoned in a nearby prison.

But not long after that the Turkish superior got seriously sick. Then he remembered what the shepherd had told him. He released him and they both went to the place and found the icon.

As soon as he took her in his arms, the Turk was healed and filled with deep gratitude for his healing, he began building a modest church.

A little later, the monastery complex was built around the church, which includes the church “St. Petka”, residential and farm buildings and the chapel “St. Machenitsa Nedelya”.

An ancient tree still stands in the yard of the monastery, which rises above the monastery buildings. Spreading its branches, it seems to stand on guard and watch over the monastery and over all those who stay on its doorstep. 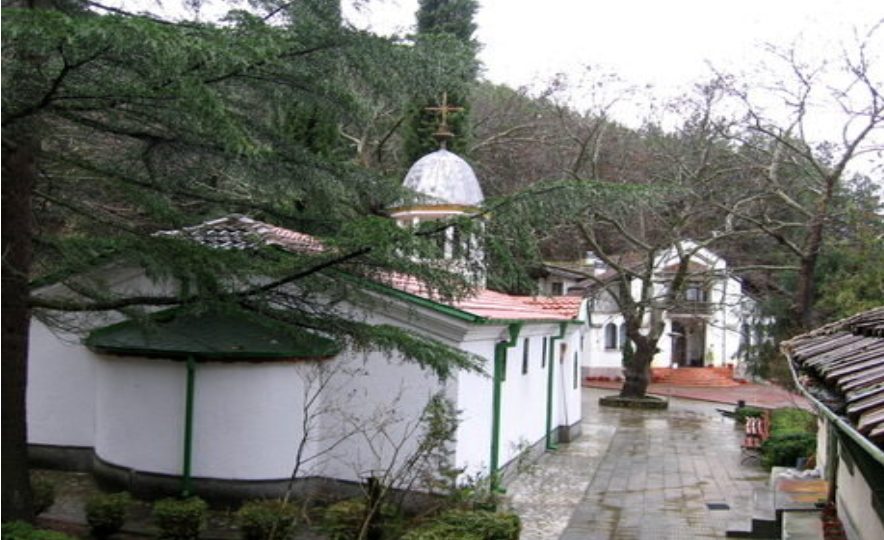 Today the holy monastery is active and every Thursday and Friday in the one-nave, one-apse church of the monastery a liturgy is held, which you can attend if you visit the monastery at that time.

The monastery complex is not large, but it is worth taking the time to visit it.

How to get to the Petrich monastery “St. Petka”?

The monastery is located about 2 km west of Petrich and the easiest way to reach it is by car. You just have to go to the western outskirts of the city and follow the signs.