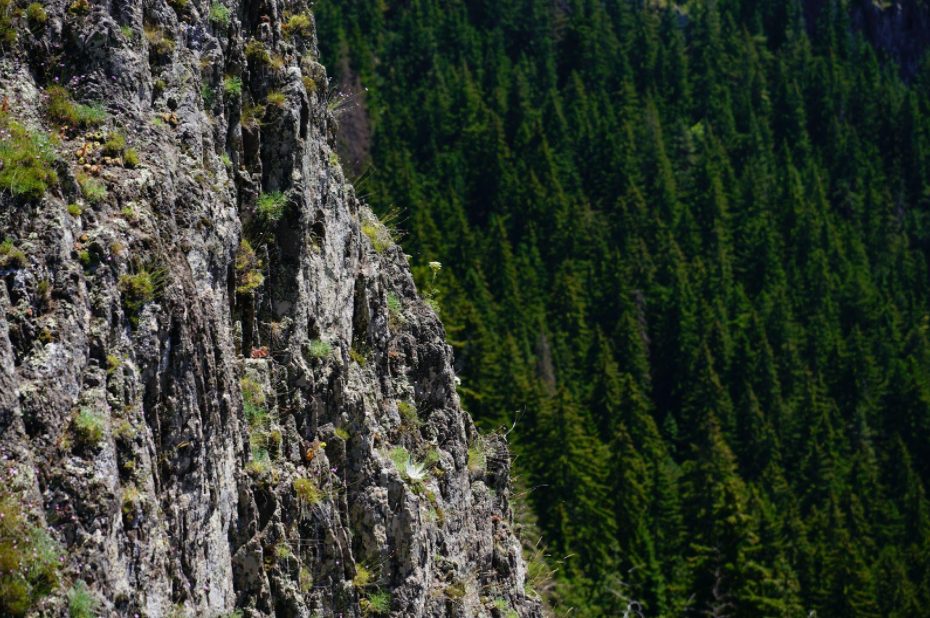 Gradishte – Historical Landscape Park is still not a very famous tourist destination in Bulgaria, but the Ministry of Tourism is actively trying to promote it through a campaign called “Hidden in front of our eyes”.

The park is located not far from the architectural reserve of Dolen village, about 8 km from it. Local legends say that a long time ago in the area lived giant rulers who built all the bizarre rock figures of huge stones.

That‘s how the name “Gradishte” was given. The place has an eco-trail,places designated for rest and relax and panoramic views. Also an “alpine trail” has been created, which is one of the attractions for children, built between the trees.

Historical Landscape Park Gradishte is a great destination suitable for adults and children . There you can enrich your knowledge and transfer to the distant past, when rituals were performed. Young children can enjoy a walk in the nature that will whip up their imagination.

The best time to visit that place is during the transition seasons – spring or autumn, as the snow will make the park more difficult to pass, and in summer the rock formations heat up and create additional heat. The visit fee is symbolic and the local guide will tell you amazing and captivating stories.

Gradishte Landscape Historical Park is an archeological place, which according to experts is one of the most ancient megalithic sanctuaries in Southeast Europe.

Megalithic sanctuaries are structures built of huge stones or slabs attached to each other. Some of the megaliths are unworked and they kept their natural form, while others are roughly worked by carving with harder tools, such as another type of stones or bronze.

The park has a rich nature and it’s home to 500 acres of rock massifs, anthropomorphic and zoomorphic megalithic figures. The remains of an ancient Thracian sanctuary and various rock formations have been found there.

The Gradishte area is located in Blagoevgrad district, near the main road from Gotse Delchev to Dospat, about 5 km east of the village of Dolno Dryanovo.

The entrance to the park is well marked with signs and easily detectable in the direction of Dospat or the village of Satovcha. It is located in the Rhodopes and the walk through it offers panoramic views of the Slavyanka and Bozdag mountains. The second one is located in Greece.

What will you learn there?

At the very beginning of the park you will notice the rock exposition complex “Chechki skali”. This is a special place where an exposition of common types of rocks in the area is located. In addition to the types of rocks, you will learn interesting facts about their composition and properties from the descriptive plates.

In case the local guide accompanies you, you can expect many interesting facts about the history of Gradishte and its prehistoric purpose. It will also draw your attention to the different rock formations, their similarities with different animal species and human forms.

History of the area

Until 2006, the prehistoric area was known mainly to the locals, but then Professor Todor Boyadzhiev found himself in the park during a casual walk. He noticed the bizarre rock formations and decided to attracted the attention of his fellow historians and archaeologists. Excavations followed in 2008.

Archaeological excavations show that the history of the prehistoric park dates back to the Stone Age, around 7000 BC. Finds such as carvings in the rocks, foundations of cult buildings, shaped circles, steps, traces of religious rituals and remains of ritual gifts were found.

They testify to a Thracian sanctuary, established around 1000 BC, which was used and inhabited until the IV-VI century.

The most important historical find is the Thracian sanctuary, which is located on the megalith “Head”, with a panoramic view overlooking the Rhodope hills. The sanctuary itself has an area of ​​about 20 acres, and its steep, almost vertical in places, slopes reach 88 meters in height .

The rocks are granite with crystalline particles and their composition is very energetic. During excavations in the sanctuary, an altar was found, which is believed to be the place with the highest concentration of energy and that rituals and sacrifices were performed there.

Near the sanctuary you will find the so-called “Promushvalka”, which is a megalithic arch with a passage through which people practice ritual drilling with a healing character. It is believed to have been used by the Thracians mainly for healing purposes, and also to purify the mind and body before entering the sanctuary.

The arch faces northeast, at the rising sun. At present, tourists pass between the giant stones in the hope of better health and leave pennies or silver.

Other landmarks are the various rock formations, some of which are considered processed and artificially carved, due to their spatial orientation and complexity.

For example, the rock form “Head” is the area on which the sanctuary was built. It clearly distinguishes human eyes, nose and mouth, which are believed to have been carved by the Thracians.

Besides it, you will find two other forms of human heads in the park , which in some places are named “Rulers 1, 2 and 3”, hence the name Megalithic Complex “Giant Rulers”.

Other rock formations are sculpted in the form of animal species such as fish, snakes, turtles, and others resemble rock mushrooms, a ship and even a crocodile.

During your walk along the Bistritsa River in the Gradishte Historical Landscape Park you will also find the Roman Bridge – a bridge built of stones in the Raykovets area, as well as a formation of several rock steps that form a small waterfall of clear water.

How to get from Lucky Bansko Hotel?

Historical Landscape Park – Gradishte is located about 67 km southeast of Bansko and 140 km from Plovdiv.Leaving Bansko, you have to get on the road to Gotse Delchev, and then on the national road III-197, in the direction of Dospat.

Gradishte is located after the village of Dolno Dryanovo. You will find it easily, as there is a sign, place for parking and also a fountain.

The drive from Lucky Bansko Hotel is about an hour and offers beautiful mountain views.