Most likely, before your trip Bansko, you have made a list of the sights you want to visit while you are visiting the town. We assume that the Holy Trinity and the Assumption churches, the house-museum of Nikola Vaptsarov, the Velyanova house, the house-museum of Neofit Rilski and a whole lot of other attractionshave immediately found a place on your visiting listand we congratulate you for your choice. 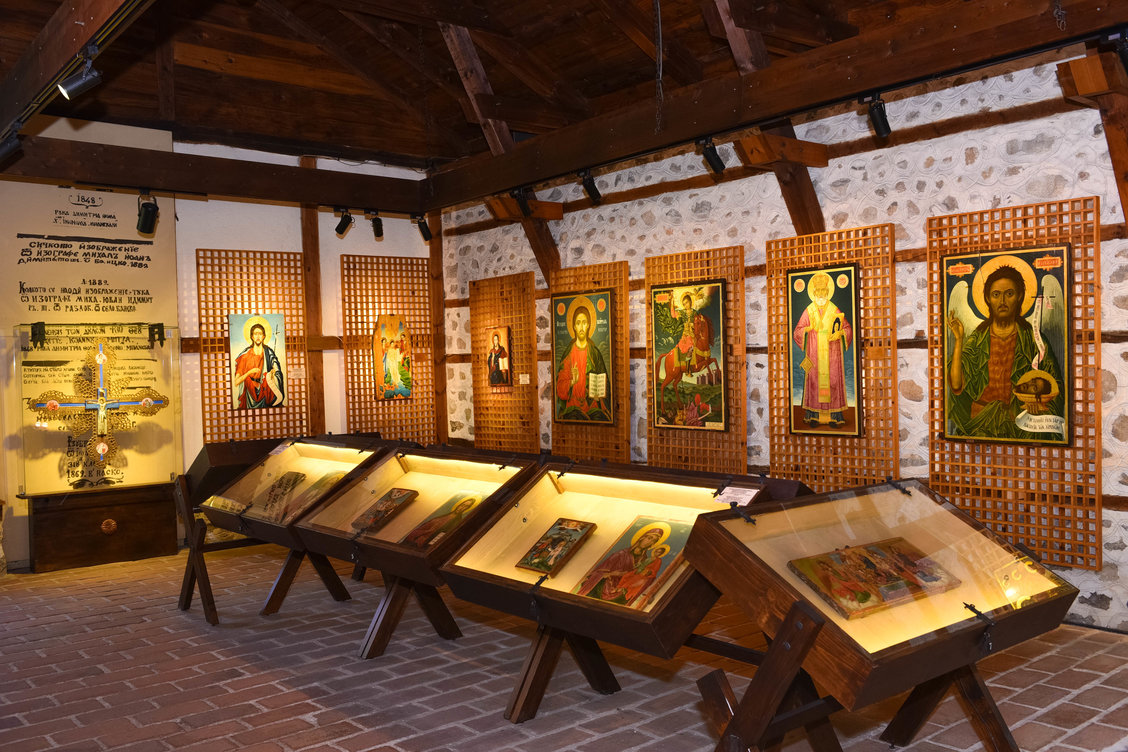 All these cultural and historical sites well deserve your attention and we are sure you will give it to them.

Now, however, we want to introduce you to one of the biggest and most interesting tourist sights in Bansko – the Icon Exhibition of the Bansko Art School, which for yet unknown reasons is not receiving the deserved attention from the tourists.

Before we talk about the icon exhibitionand what you can see there, we will start a little further afar by telling you about the building where the exhibition is housed.

We make this deviation as it is the oldest preserved and the only precisely dated building in Bansko. The one-story building was built in 1749 and for many years it was a convent that originally belonged to the Hilendar and later moved to the Rila Monastery.

For several centuries, the women’s convent in Bansko has played an important role in preserving the Christian spirit of Bansko people. The building is preserved in its completely authentic form and is itself one of the most remarkable examples of the cultural and historical heritage of Bansko.

And why is it so precisely dated? Well, the Bansko people were very intelligent and provident people who were proud of their work and therefore carved the date on which it was built on one of the main walls of the convent.

The Renaissance building is declared a monument of culture of national importance.

What is the icon exhibition?

The permanent exhibition of icons in Bansko has been open since 1986. It is dedicated to the masters of the Bansko Art School which has contributed greatly to the development of icon painting in the country.

The Bansko Icon-painting School is one of the biggest phenomena not only in the field of painting and woodcarving in the 18th – 19th centuries, but also leaves its lasting impression on the history and the cultural heritage of our country.

The founder of the Bansko school is believed to have been Toma Vishanov-Molera, who contributed a lot to the development of the monumental painting in Bulgaria. 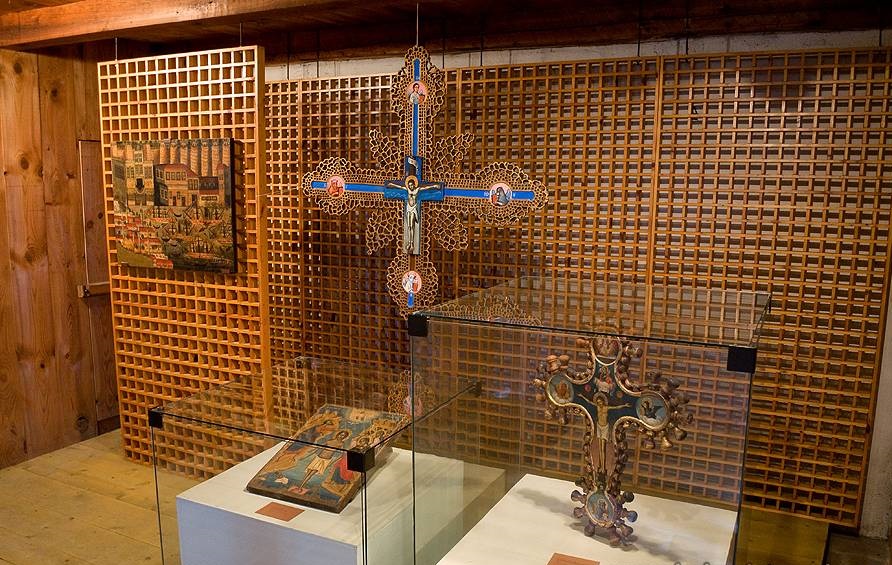 Molera is known to have been born in the years between 1750 and 1760, but there is no definitive information on when he died. For a while Toma studied in Vienna where he was strongly influenced by the European traditions in painting. The foreign style he puts in his works gives him the nickname Molera which translated from German means “artist“.

Returning to his native Bansko, Toma Hadzhikonomov Vishanov laid the foundations of an innovative, progressive style in icon-painting and woodcarving, which distinguishes the masters from the Bansko Zografska School from all the other schools in the country.

The paintings that the artists of this school draw are distinguished by lengthy figures, color and compositional harmony, the elegant line of the draperies, the purity and luster of the painted figures.

By the end of his earthly road, Toma Vishanov-Molera did not change his style and ganerated a new, European mindset among his followers. Molera is the author of the icons of the iconostasis at the Assumption of the of the Mother of God Church in Bansko, the icon of the Virgin Mary with the Infant, Angels and Prophets; he worked together with his son on the painting of Pokrov Bogorodichen at the Rila Monastery. Researchers have found his handwriting in different temples not only in Bulgaria, but also in Austria, Hungary and other countries.

After the master’s death, his son Dimitar and his grandson Simeon continued the development of the Bansko school.

Dimitar Molerov leaves his own footprint, separating himself from his father’s style and returning to the more conservative, style of Mount Athos of icon-painting. The paintings that come out from under Dimitar’s brush are distinguished by the color and plasticity of the images, the love of light, the spaces and landscapes painted in depth.

Taking elements of his father’s techniques and interweaving them with a more conservative way of drawing, Dimitar Molerov became one of the most demanded and respected painters of his time.

The icons of the Holy Trinity Church in Bansko, the painting of the Archangelic council Chapel at the Rila Monastery (1835), thepainting of the church in Pchelinoare work of Dimitar Molerov.The master works inmonasteries in Greece, Macedonia, Serbia, and among his greatest creations are the frescoes in the Athos Monastery of Vetroped.

Unfortunately, Dimitar did not leave his signature everywhere he worked, and this makes it difficult for his researchers to track his work, especially outside the country. He is supposed to have worked on the island of Crete, in Shkodra and elsewhere, but there is no irrefutable proof of his activity.

The next generations of the family, who continue the traditions of the Bansko Art School, are the son and grandson of Dimitar Molerov – Simeon and Georgi.

Simeon Molerov has worked with his father for many years and fully mastered the technique of painting which is characteristic of the Bansko Art School. Unfortunately, Georgi Molerov (grandson) dies very young and has not managed to leave a great legacy except a few small icons that are painted with a perfect technique.

In addition to Toma Vishanov – Molera and his heirs – his son Dimitar and grandson Simeon, famous masters such as Mihalko Golev, Stefan Stamatov, Georgi Boboshevski, Master Velyan and his son Angel Velyan, Hristo Galabov, Dimitar Sirleshtov and others worked at the Bansko Icon-painting school.

The masters of the Bansko school are the beginning of the characteristic architectural style known today as Bansko Fortified House. This Renaissance architectural style is distinguished by its massive high walls, its heavy gates, its secret passages, embrasures, hiding places and most of all its ornamented facades.

The love of the Bansko people for the painting of houses was so great that besides the facade, the individual rooms and even the hiding places were often painted.

Today, examples of the 18th-century architectural style Bansko Fortified House can be seen in the old quarter of Bansko, and the most popular among them are the Velyanova, Benina, Hadzhivalchevska, Molerova, Sharena houses.

Over the years Bansko masters have collaborated with Debar, Tryavna and Samokov Art Schools, but retain their innovative style.

The distinctive style of the icon-painters from the Bansko Art School is the love for the golden and bright colors. All the masters of this school (except for the founder Toma Molerov) played generously with these colors.

Bansko Zografska School is of local importance. The masters belonging to it work mainly in Bansko, Razlog, Blagoevgrad and the surrounding settlements. Their most significant works can be found in the church of the Holy Trinity in Bansko, Rila Monastery and Razlog.

In 1986 it was decided to create a permanent icon exhibition in the building of the former convent, which would allow more people to get acquainted with the works of some of the greatest masters of the Bulgarian iconography, painting and woodcarving from the Bulgarian Renaissance period.

The icon exhibition in Bansko is set up in six halls, which feature original icons, photocopies of frescoes, church plates and more. Portraits of prominent Bansko people, who contributed to the development of the town during the Bulgarian Renaissance can be seen in the first hall. Among them is the portrait of Hadzhi Valcho (brother of Paisiy Hilendarski), who was one of the most generous donors in the city.

A special place in the exhibition is dedicated to the work of the Molerov family, which laid the foundations of the Bansko Art School.

The works of Toma Molerov can be seen in the third hall of the exhibition and among his most remarkable works, which anyone who visited the icon exhibition in Bansko can enjoy, are photocopies of mural paintings from 1798 from the St. Luke hermitage, at the Rila Monastery.

How to get to the Permanent Icon Exhibition?

The one-story building in which the exhibition is housed is located in the city center, just meters from the Holy Trinity church and the monument of Paisiy Hilendarski.

If you come to the church, you cannot miss or pass the building, but if that happens, the exact address on which the icon exhibition in Bansko is located is ul. Yane Sandanski 3.

The ticket price for adults is BGN 3, for pupils and students – BGN 2.

The Icon exhibition in Bansko offers guided tours in Bulgarian, English, German, Russian and French. The price for it in Bulgarian is BGN 5, in English – BGN 10.

If you decide to visit the exhibition on Monday, you will be able to do it for free.

The permanent iconic exhibition Bansko Art School is part of the 100 national tourist sites and if you have a tourist book you can get a seal. (The seal for the site is located at the Nikola Vaptsarov house-museum).

If you have missed adding the icon exhibition to your Bansko sightseeing list, do it now. We guarantee that the exhibition will appeal to you very much, and if you’re Bulgarian the pride you will experience being the descendants of such a talented and powerful nation cannot be replaced by anything else.