Mountain biking in Bansko is among the attractions the resort offers to tourists. Where – of course, there is no need for the guests of the city to come with their own bicycles – bikes are rented, and a guide is provided.

Additionally, the attractive entertainment offered includes a 3-4-hour free exploratory tour. The route is chosen locally and the tourists lead an experienced mountain biker who knows the terrain very well. 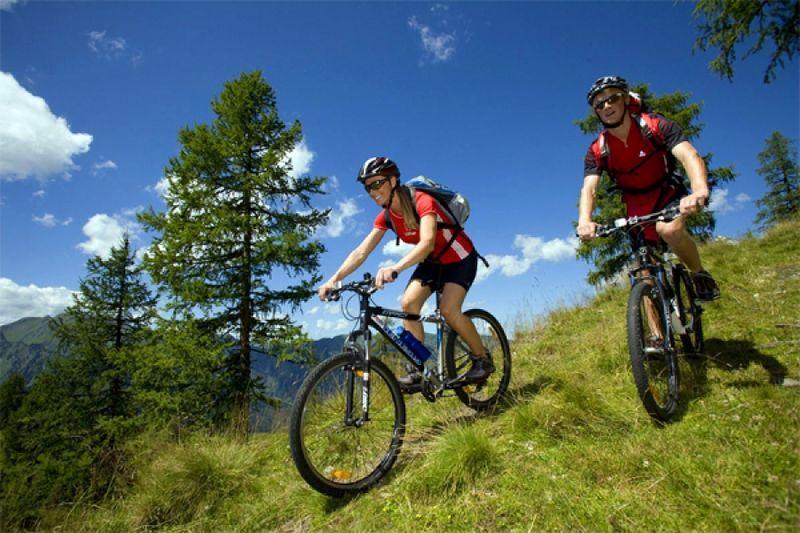 It’s no accident. When mountain biking started in Bansko years ago, it is reported that this adrenaline sport is gaining more admirers in our country.

These competitions are included in the official sports calendar of the Union, there are also criteria for entering the national team in this discipline.

Last year, our national team of 7 people, sent by the Union, took part in the World Cycling Championship in the downhill and forcectic disciplines in Italy. In it, on a difficult terrain requiring a lot of technical skills, 250 distinguished masters competed, more than half of which were overtaken by the Bulgarians.

Naturally, mountain biking in Bansko is not only for advanced but also for amateurs, for which certain routes have been selected in Bansko.

Even amateur races are taking place in the area – for example, downhill or country cross-country skiing. It should be noted here that there is a strong interest, including women. This is another reason to develop mountain biking in Bansko.

The organization includes municipalities’ guides, mainly with sponsorship for the prize pool of competitions, BRC, Rescue services because of the mountain paths in the route, forestry, as the trails pass through wooded areas, etc.

There are already traditions in organized mountain biking in the city. It is an attraction for tourists by selecting different routes for mountain biking in Bansko and this allows to include both long-time active cyclists and people with little experience. In addition, international races are being held on a regular basis. 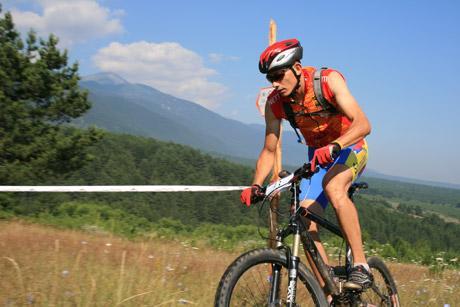 It is interesting, however, that this tradition originates from foreigners – here the basics of mountain biking as a sport put England in 2009, headed by James Hughes.

The enthusiasts set up Bansko mountain biking organization and started cooperation with the management of Pirin – the national park, which since 1983 is under the protection of UNESCO. The purpose is for the routes in Bansko to pass through the park, because of the beautiful landscapes and the natural mountain terrains, and at the same time not to harm the nature.

Tracks to practice mountain biking together are marked. The marking is a bicycle wheel shape and a colored dot is placed there. In the years since 2009, the organization has marked over 200 kilometers of mountain biking routes in Bansko to various places in the Razlog valley. Some of them pass to Rila and the Rhodopes.

In the development of the already popular mountain biking in Bansko is included the Municipality. In 2011 there is a park cycling complex, with different obstacles and facilities, with the aim of being mass access, training, training, competitions.

Later – 2012 – the Municipality wins a project to build a bicycle path to the St. Nicholas complex, which is 2250 meters long and is included in the numerous routes in Bansko.

Meanwhile, it is evident that children are very much involved in mountain biking – this is the case of Lucky Kids – the international children’s camp in Bansko for English language training.

The good perception of tourists of mountain biking as an attraction opens to this sport wide prospects for development because there are all conditions in Bansko and the rest is a matter of organization – something that they also have here.

Mountain biking has various routes in Bansko, which pass through many beautiful places. This directly exciting communication with nature naturally likes people who are now massively affected by urban stress. They enjoy stunning views while riding a bicycle. 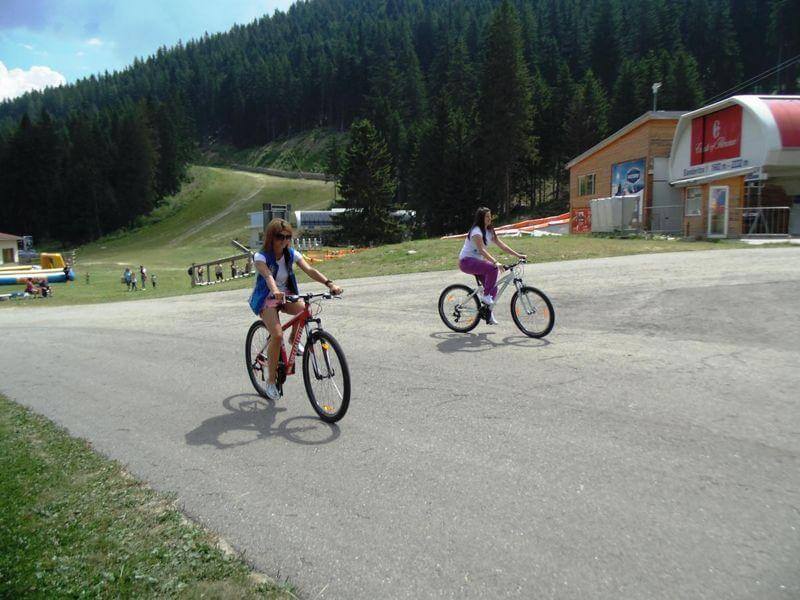 Man unloads, shakes off the tension and anxiety in everyday life, raises his mood, relaxes. This is a strange “drug” against various seasonal disorders and depression not only because it distracts from negative thoughts but also because it releases the hormone of happiness – endorphin.

Positive psychological effect also has the feeling of personal victory, personal success, once the test has been subjected to endurance, qualities, skills and the route is completed.

Cycling is a fascinating way to maintain physical shape at all levels and improve health. Many people already accept it as part of a healthy lifestyle. In practice, this is a sport with relatively few risks for injuries – less than a run, for example.

Mountain biking is a sport that trains the heart, reduces cholesterol and the risk of heart attack. The more you train, the better the heart works and the blood supply improves, the breathing, the oxygen supply is improved. According to specialists, it also improves bone density.

It is also a complex sport, it loads the whole body, not only the muscles of the legs, but also the abdomen, the chest, the hands. This is certainly avoiding overweight and obesity.

An interesting study in this direction has been made by English scientists. It turns out that cyclists aged 55 to 79 are physically much younger than the rest of their age. Thanks to cycling, their muscles, heart, and brain capabilities were almost like younger players.

Routes in Bansko for mountain biking

Mountain biking has routes in Bansko, which in practice cover all levels of difficulty. This is because there are selected routes for all occasions – for tourists who have decided to “try”, and for the participants in the many international competitions that are organized in Bansko. 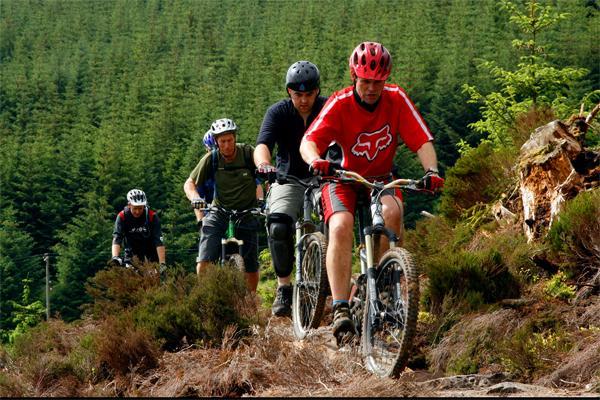 The bike lane to St. Nicholas, for example, is a great bike ride, and there are recreational spaces, barbecues and bicycle stands.

There are other routes in Bansko with facilities for tourists. For example, the more inexperienced cyclists can be driven by car to Todorova Ornitsa over Bansko, from where to go to the St. Nicholas complex, to Dobrinishte and back to Bansko.

This route for returning to Bansko can be chosen between the narrow-gauge and the agricultural road, which is at the low, at the foot of the mountain.

The route in question is called “Dead Dog“. This is not the only attractive name among the cycling routes in Bansko. In fact, most of them are: “The Flying Scot,” “Little Queen,” “Khalna Banya” and others. Obviously the Mountain Cycling Organization /British MTB Group around James Hughes/ have shown an English sense of humor.

By the way, their contribution is really great. For example, as early as 2009 when the organization marked the first routes, James Hughes created the Road for Nowhere race. Today it is international, annually and is included in the official sports calendar.

The same applies to “Three Mountains Ultra 120”, with the English team starting in 2012.

“Road to Nowhere” is a route that starts from the hut “Bezbog” to Dobrinishte and then to Bansko, the movement is only a descent.

Another route with an attractive name – “The Flying Scot” is also just a descent. Starting from Bezbog hut, it goes down to the Mokhata area along an old road in the forest and goes to Dobrinishte. It can continue to Trionska Polyana and get off at Bansko.

Swimming in Bansko and large-scale projects

The concept of a mountain biking and recreation center in Bansko is again the MTB group for mountain biking. They are actually Englishmen, settled in our country.

The idea was quite large. At the opening of the center – the biggest in the country for that time – in 2011, James Hughes commented that he hopes this small park will be a step towards a great project for the attractive sports that Bansko offers in the mountain – climbing, cycling, mountaineering. 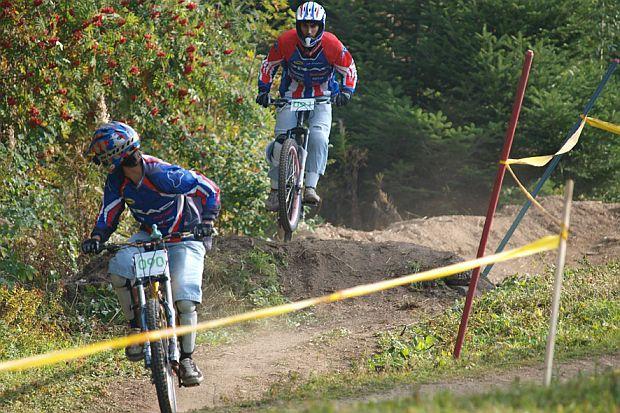 Hughes also says that mountain biking in Bansko teaches children valuable qualities. Against this background, there is a great interest in the park among young people. The idea is for the cycling park to boost mountain biking and to develop as the largest not only in Bulgaria but also in the Balkans to attract participants from abroad.

The idea of ​​the center provokes a wide public interest, volunteers come from the whole country for the construction of the cycling park. They have been working on the routes for over a month. Different facilities and obstacles have been made to bring the track closer to the real mountainous conditions.

A direct consultant was Diddy Schneider, who is famous for building such parks not only in Europe but also on other continents. In the industry, over 90 percent of the good biker parks are part of his work.

The park opens with free access for the fans of mountain biking in Bansko and immediately starts to think about competitions and trainings. The enthusiasts wish in Bansko to be among the best bikers as they are among the best skiers.

The development plans for Bansko and the region are to keep the resort’s activities in line with the demands and expectations of the tourists, to complement and expand the summer activities for the year-round visit.