And right there, in the very heart of the village, is located one of the most magnificent and mysterious late medieval churches that have attracted the interest of tourists and explorers for many years. 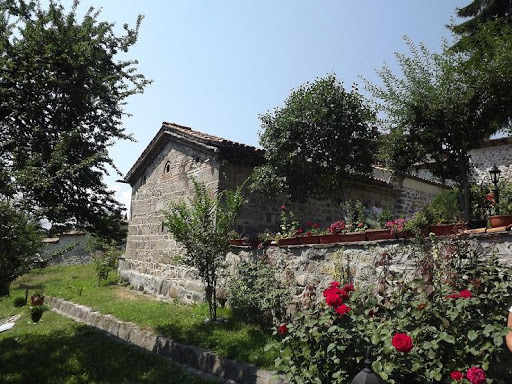 If you have only heard about this church, but you haven’t visited it, then your first impression as you approach is likely to be a little disappointment. The Orthodox temple is simple, small and doesn’t attract attentioon.

In fact, there is an explanation of the construction of the church and it is quite logical. According the existing official documents, the church was built in XVII century (1614), and this is a period in which our country was under the Ottoman rule. According to the Turkish laws that were applicable at that time, the Christian temples couldn’t be larger and higher that the Turkish temples. For this reason, the local people from Dobarsko village dug the temple into the ground, didn’t put a dome and a bell tower on it, and they observe the requirement for the small size.

Thus, when a Turk walked by the church, he wasn’t able to even notice it, because from the outside it looked rather like a simple stone building with small dimensions (8.37 meters in length, 6.5 meters width and 5.2 meters high at its highest part).

According to some prominent Bulgarian historians and archaeologists (including Professor Bozhidar Dimitrov), the church was built during the First Bulgarian Kingdom. In defense of their theory, the historians point out three very important facts:

There is another theory, (we repeat) just a theory, according to which the dug slab with engraved earlier year indicates that there was an older church on the place of the today’s temple, and during the construction in 1614, the builders built in the slab in the new church, as s sign of succession.

We leave here the dispute with regard to the exact date of construction of the building, and once again we look the church from the outside. You also should do it very carefully and you will notice a carved Christian cross on one of the external walls, and on the other wall you will see…. a swastika. 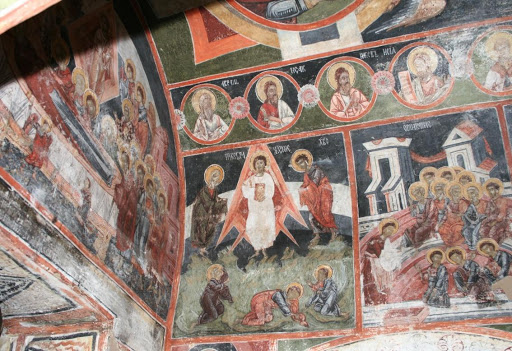 A cross is understandable to be present on the façade, but why the swastika?

The historians have their own theory of the swastika and it is that most probably the stone with the swastika was transferred from a proto-Bulgarian shrine and it was built-in during the construction of the church in order to show continuity between the generations.

You haven’t yet entered the church but the stories, theories and legends are becoming more and more…

The name of the church is also of great interest, as it turns out that this is the only church in the country, which is named after two warriors – St. Teodor Tiron and St. Teodor Stratilat.  Unusual and weird, right?

The moment you enter the small, plain at first glance church, you will forget the world around you. This is absolutely certain, because we know that you will be completely stunned and impressed by the interior.

The first thing that will leave you speechless is the fact that a temple, which is so small can be painted with more than 460 images. Literally every meter of the temple, 160 square meters in total, is painted with biblical images and paintings of local heroes.

You will see also the images of the holy brothers Cyril and Methodius, as their images, according to the historians, were depicted for the fist time exactly in this church.

And you will not have seen the most interesting yet. What attracts thousands of tourists and causes arguments between the historians lasting many years, is the way the icon-painters drew the scene “Transfiguration of God”.

The way Jesus Christ is portrayed causes crowds of tourists to come to the church „Saint Teodor Tiron and Saint Teodor Stratilat” – in Dobarsko village to see the image and not be able to believe their own eyes. Because in this scene Jesus Christ seems to be in a spacecraft (rocket).

There is one more „cosmic” scene in the temple and it is „Resurrection of the Lord”, where Christ seems to be in a cosmic capsule and this scene causes great astonishment and impression.

If you look carefully the images of the saints, you will find Saint Pavel’s image, which is painted in a way that no matter in which part of the church you are in, his eyes will always be looking at you.

Unfortunately, at that time, the icon-painters didn’t write their names under their works, because of the belief that they were not the real painters, but God does this by moving their hands, so nowadays there is no information about the name of the iconographer who painted so brilliantly the temple, but the experts think that these frescoes are made by a whole team, which included a master, apprentices and journeymen.

Since the female images painted in the temple are 30, and this wasn’t accepted in the past, the experts believe that one of the iconographers was a woman. This is very difficult to be proven, because in these centuries the idea of a woman practicing such art was completely unthinkable, but the theory is intersting and that is why we want to share it with you.

You think that the miracles of the church „Saint Teodor Tiron and Saint Teodor Stratilat” – in Dobarsko village end up here? Do not hurry so much!

The very construction of the church is astonishing, because regardless of the weather conditions outside the temple, the temperature inside is always the same …as if there was an air conditioning. The constant temperature, the lack of windows and the smoke from the candles have preserved the frescoes during the centuries, and when a team of restorers came to the temple in the period 1973 – 1976, they found out that the restoration of the frescoes was not necessary.

The experts simply cleaned the frescoes by removing the accumulated soot and the images of the saints became so bright as if the iconographers had just finished working on them and had left.

Once you finish with the church and decide to leave, don’t be in a hurry, but take a walk through the beautifully arranged and full with colors church yard. And there, near the flower-beds, you will see a small spring (a holy spring), there are even legends about it. Wash your face because, according to the legend, the water in the holy spring is healing, then throw a coin for good health. 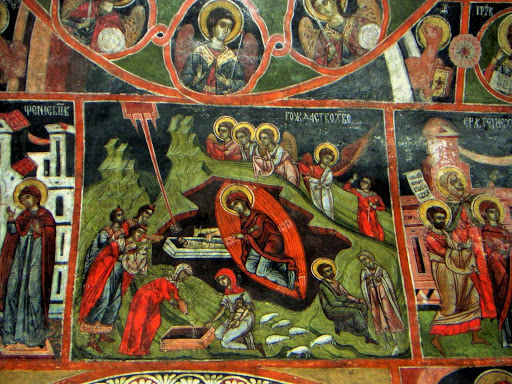 What is the legend for the holy spring?

… It was the winter of 1014. Shortly after the battle at Belasitsa, which tsar Samuel’s troops had lost, the Byzantine emperor Basil II Bulgar Slayer blinded 14 000 Bulgarian warriors, and part of them decided to go to the Rila Monastery, but they were very tired and stopped by the holy spring to spend the night. In the morning they washed their faces and eyes with the water from the holy spring and they felt relieved. So part of the blind warriors decided to settle in these lands and the holy spring became very famous for its healing properties …

Interestingly, this legend was “told” in a fresco that is inside the church „Saint Teodor Tiron and Saint Teodor Stratilat” – in Dobarsko village. If you can’t find it on your own among the many frescoes, ask the local people and they will show you the scene.

At the end of our journey back in time, we are sure that you are already wondering how to get from the Lucky Bansko Hotel to Dobarsko village and its unique church.

So we won’t delay the answer anymore and we will tell you that the distance between the town of Bansko and Dobarsko village is about 21 kilometers. From Bansko you should go to Banya village, so drive only straight and in about half an hour at most you will reach the village.

As soon as you enter Dobarsko, you will see enough signboards that will guide you to the church, and if you did accidentally miss a sign because of the beautiful sights on the road, then ask the local people or drive to the center of the village.

The late medieval church „Saint Teodor Tiron and Saint Teodor Stratilat” is located in the very center of Dobarsko village.

We almost forgot… If you have a tourist book, don’t forget to take it with you, because the church is one of the hundred national sites and it has been declared a UNESCO cultural monument.

And finally… When there is a visiting group in the church, the doors are closed in order not to disturb the peace so the group can be able to enjoy fully the beauty of the temple. Therefore, if you go there and the doors are closed, don’t worry, just wait a little bit, it is worth it!