Water fun in the mountains

Sounds a little weird, but it’s a fact – fun, typical of the sea, is also at its peak in the mountains. For the second year of Bunderishka Polyana in Pirin, the huge water slide, which is part of the summer attractions in Bansko. 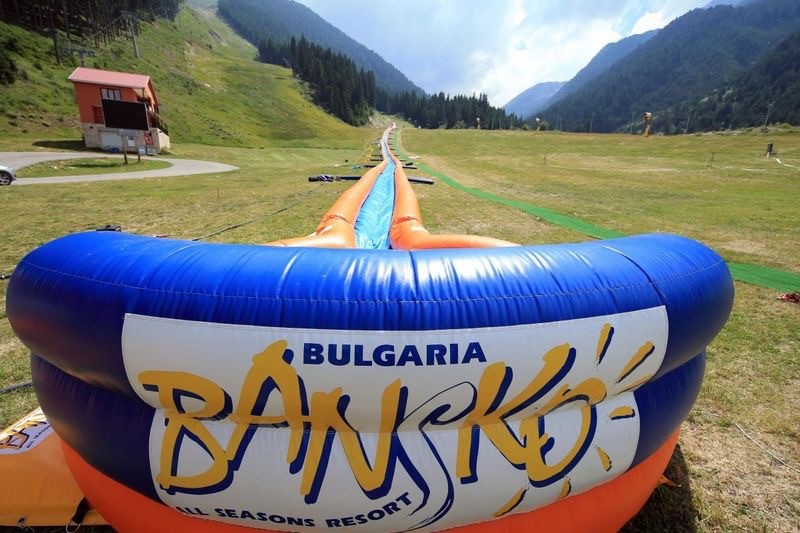 And as usual, Bansko is “ahead in time” – the water slide over the city, which is inflatable, not only is the longest on the European continent but also grows in length. Last year was 350 meters, now with new sections it reached mind-blowing 400 meters.

Among the numerous summer attractions in Bansko, the water slide is definitely one of the most entertaining and exciting adventures. 400 meters of water drops at 45 kilometers per hour while finishing in the inflatable pool! And then again, because people usually go down several times.

Last year, when the rink was first included in the list of attractions in Bansko in the summer, it was 300 people per day. This has shown that it will be a hit among the various attractions and the organizers decided to make it even longer to extend the emotion.

For adults, one way downhill is worth 12 BGN, for children between 8 and 12 years is 9 BGN. There are packages with a different number of discounts, where discounts are made. So prices are affordable and increase the interest in the slide as one of the top attractions in the summer.

The construction is quite impressive, complex and of course – secure. Without the three tons of water that constantly scrolls through the filters and heating devices, before the elongation the slide weighed 4 tons.

The Banderishka Polyana Aqua Park, which is part of the various attractions in Bansko, has an altitude of 1650 meters. However, it offers numerous hot summer emotions.

Undoubtedly the water slide is the most interesting, it is unique in the attractions offered. Like her there are only three places in the world – New Zealand, the United States and Australia. The recorder is a New Zealand water slide, 600 meters long, with a speed of 53 kmh. In 2015 she was moved to the United States.

In addition to the slides, the summer entertainment complex in Bansko‘s ski area for entertainment includes a lot of fun. Extremely hot emotions are experienced by tourists, for example, on a toboggan run and attractive jumps. The prices here are also quite acceptable – 10 leva are 5 downhill and 16 leva – for 10 descent, and the interest is great.

In these performances, which are among the wonderful natural sights of Banderishka Polyana, families and friendly companies can enjoy having fun all day long. Here the summer attractions in Bansko are interesting for children and adults.

The place for these recreational activities is ideally suited for relaxation – with attractive, artistically arranged and arranged benches, seats, arbors, corners, comfortable tables and chairs for consumption. For the little ones there is a children’s kingdom with inflatable castles, a climbing wall, etc.

For juniors and adults, it is especially fun to live the “jagga” – the emotions are like a real match. However, the summer attractions in Bansko also include football – there is a special playground for small-size football on Banderishka Polyana. There is also a shooting range.

Another of the offered activities, which attract both small and large, is the mini-golf. One game is paid 5 leva, 2 consecutive – 8 leva. Be careful, however, not to break or lose a stick – such a scum will cost you 45 leva.

The cabin lift itself is one of the most beautiful attractions in Bansko. In the summer, and in winter, he uncovers incredibly picturesque natural scenery, filled with many positive emotions, leaving unforgettable memories.

At the same time, the cabin lift is a quick and convenient way to go to Banderishka Polyana, where there is a complex for attractive activities. It has 8 seats in each gondola and it is 6 kilometers long and 233 meters long – enough time to count the lift to the numerous attractions in Bansko. 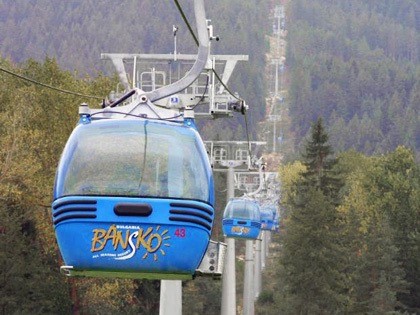 Its capacity is 2000 people. The lower station is in Bansko, the upper one – on Banderishka Polyana, the Chalin Valog, where the intermediate station is not necessary. It travels for a total of 25 minutes, overcoming 597 m displacement. With the track of 6233 meters, the Bansko Gond lift is the second largest in Bulgaria along the Simeonovski lift, which is 6270 meters.

Opened in 2003, the cabin lift in Bansko is maintained in excellent condition. It functions actively in both winter and summer. From 1 July, he works all day long, without a break. This working time is until 24 September.

In anticipation of the active winter season, until 11 October, the lift runs from Monday to Friday with one trip up to 8 hours and one descent to Bansko at 16:30.

Transport to the home station is frequent. Aparthotel Lucky Bansko SPA & Relax 5 stars for example offers its guests free transportation every 30 minutes, although the distance from the hotel to the starting station of the lift is about one kilometer and many people prefer to go for a walk.

Attractiveness in Bansko for those who are looking for strong sensations

The mass attractions in Bansko are for people who want to abstain from their busy everyday life, to diversify by seeing new interesting things, to experience pleasant emotions for stress relieving.

But there are people who like to “be on the edge” to increase the adrenaline to the max. Among the routes that start from Bansko, they will probably choose the difficult alpine trails – along shimmering chasms and goat paths in terrible, inaccessible to ordinary tourists rocks.

Besides the highly adrenaline routes, there are special attractions in Bansko for those who are looking for strong sensations. They are also on water, both by land and by air.

The water attractions in Bansko for those who love the senses are kayaking or inflatable boats on lush river waters. Rafting and kayaking are practiced in Struma and Mesta. These are summer attractive activities that offer many challenges to the will and skills of the participants. 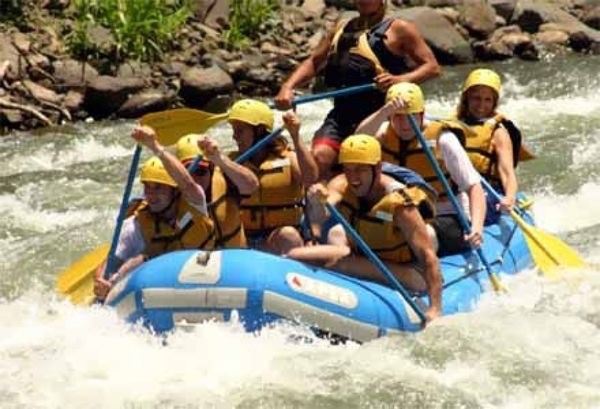 Struma starts down from calm waters in beautiful nature, passes through the lush waves in the Kresna Gorge and ends up in Sandanski again in quiet waters, where one can relax again and enjoy the picturesque views.

Organizers are rafting clubs with experienced instructors who judge and monitor the safety of the participants.

The crossed mountain and forest terrain allow for attractive activities in Bansko with off-road. Persons with strong sensations will most likely overlook the lighter trails offered, and “will be thrown” on the routes with the greatest difficulty. These attractions in Bansko can last from 2-4 hours to all-day, including a barbecue in the mountains.

Air attractions are bubble elevations. They, of course, are most dependent on time. For example, when a stronger wind appears and the instructors are least likely to suspect that there is a danger to tourists, the elevations are stopped. Climate conditions, in terms of safety, may require changes in other “adrenaline” experiences in Bansko.

Among the numerous attractions in Bansko are the demonstrations of different techniques from the local old artistic crafts. They are accompanied by exhibitions with unique works that can not be seen elsewhere.

These attractions cause great interest and admiration, both ours and foreign tourists come especially to see them. Many take advantage of the opportunity to engage with the masters during the demonstrations – the feeling is great and the memories remain for life.

The artistic attractions in Bansko, connected with the old crafts, are held annually throughout the year under the title “Traditions and Art”. Demonstrations are made weekly and are on two consecutive days – Friday and Saturday.

Among the local masters is Maria Kushleva. This summer she showed how the beautiful, colorful and famous bathing rugs and rugs were weaving. 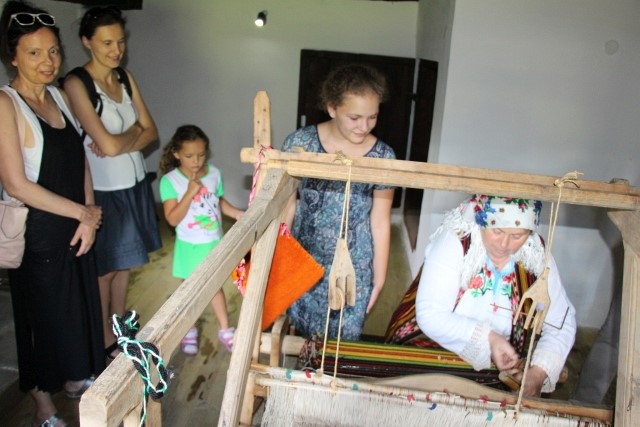 The demonstration took place in the authentic atmosphere of the Velyan House, which is a museum and is among the cultural attractions in Bansko. Inspired, some of the visitors overcame the concern “whether they will do it,” and they sat down on the ground.

This summer in these attractive activities in Bansko already made deministrative techniques and Nikolay Kulin master-carver, who in front of young visitors directly gave a woodcarving lesson.

Of great interest were two exhibitions. Rayna Baryakova, who created icons with a needle, attracted many audiences with her “Drawing with Needle” exhibition. Admiration also provoked “Marangoz” – an exhibition of carved icons that arranged the master Spas Ergin. Sashka Rupchina showed her energy paintings in the exhibition “The Way of the Heart”.

Summer Attractions in Bansko are also offered to tourists lessons of playing bagpipe, tamboura, folk dances and singing. Interesting is the one-day tour to Sitan Kale – a late antique fortress, as well as to “St. Nicholas “- an attractive archaeological complex that includes the remains of an ancient settlement for more than 3500 years.