A cozy place located in the Razlog Valley, carefully guarded by three of the most beautiful and picturesque mountains in the country – Rila Mountain, Rhodope Mountain and Pirin, the town of Razlog is a real paradise that can offer to its guests beautiful views, history, sights and hospitality.

The town is a desirable and loved destination for all who are looking for a peaceful, beautiful and filled with landmarks place. It is also a very attractive center for the guests of the town of Bansko who include it in their list of places for walking tours in the area.

You haven’t visited Razlog yet? It is time to fill this gap, because the town really is worth seeing! 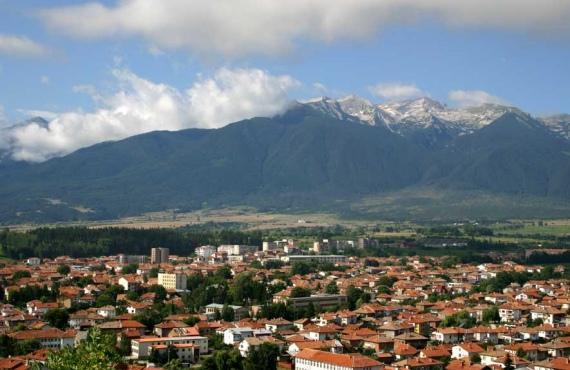 Many, many years ago, during the time of the Thracians, a settlement was formed on the territory of today’s town of Razlog, which was called Mehomia.

According to some historians, the name of the settlement comes from „meh” (a bag made of animal skin). It was also called this way because of the skins, in which the tar that was harvested in the area was transferred.

According to other theories, its name has nothing to do with the tan and the skins that were used to carry it, but it is associated with a legend according to which a great Thracian commander won a great victory over the enemy troops and in honor of this victory a settlement was formed, and initially it was called Meo Mia. (Meo Mia or Mahi Mia in translation from Greek means „my victory”). After a while, the name was changed from Mahi Mia to Mehomia, because it was easier to pronounce.

Mehomia was also mentioned in the Rila charter from 1378, as tsar Ivan Shishman listed the settlements that are subordinated to the Rila Monastery, and he mentioned the „popes of Razlog”.

During the Ottoman Rule the settlement was mentioned also in a document from 1576 under the name „Mehomia village”. According to this document, the village belonged to Razlog district in the Ottoman Empire, where lived mainly dzhelepkeshanski families (sheep breeders).

Over the years, the settlement has grown, crafts have developed, and Mehomia has become a well-developed and thriving settlement.

At the end of XVIII century in Razlog was created the first church school, churches were built, shops were opened, and the Sunday market in the town became one of the most visited trading places in the region.

The town was liberated from the Ottoman Rule in 1912 and since 1925 it is named Razlog (in the name of the valley where it is located).

The sights in Razlog and the environs that impress…

The Christian temple is located in the very heart of Razlog and is one of the first places that is recommended to visit.

The church is not among the oldest churches in the region (it was built in the first half of XX century), but it is quite impressive as architecture and is one of the biggest and most beautiful churches in the Nevrokop diocese.

The temple impresses with interesting frescoes, a beautiful altar and neat yard space, as well as with its 26-meter bell tower that reveals incredible views to the mountain.

„Saint George” was built in 1834 and is the oldest (and the smallest) church in Razlog. The church is a three-nave pseudo basilica, in which you can see, apart from the painted by an unknown master iconostasis, also the icons -work of Toma Vishanov.

The temple is located in the old cemetery park of Razlog and is a monument of culture.

In Razlog you can see over 40 houses with architecture of the Bulgarian Revival period, but if you don’t have enough time, we recommend you to find time to visit at least the Historical museum in the town, which is located in the house of Nikola Parapunov.

The house is declared a monument of culture and will give you an idea of the type of houses that were built during the Bulgarian Revival Period in Razlog.

Since 1957 in the house of Nikola Parapunov is located the Historical Museum of the town and if you decide to visit it you will be able to enjoy over 5000 exhibits that tell the story and lifestyle of the people from Razlog and the region   from antiquity to the present day. 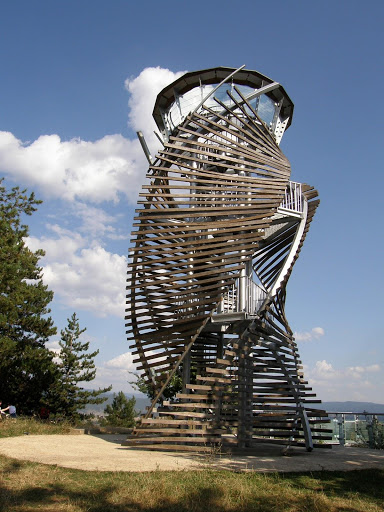 The Solar calendar is one of the biggest attractions in Razlog, so we advise you to visit it (especially if you are with children). The calendar consists of 12 marble slabs with carved animal figures. The slabs are arranged in a circle and form an ancient solar calendar.

Such a calendar was actually found on the territory of the municipality of Razlog in the 70s of XX century and according to the historians it served our ancestors to orient themselves in space and time for centuries.

The Solar calendar, which today is located in the park of the town is a full copy of the ancient calendar, and using it you can find out how the years are calculated and what your years of birth mean.

„The steps” is the newest attraction in Razlog, but has already become one of the most visited sights in the town. The walkway is built on a European project and it leads to the top of the Golak hill. And there, at the top of the hill, is located the main attraction of the walkway – a twelve – meter tower called “The Steps”.

The walkway is called “The steps” in the name of one of the most beautiful and interesting natural phenomena in Pirin Mountain – “The steps”, which you can see if you climb to the top of the tower.

„The painted church” is one of the sights near Razlog, which attract more and more tourists every year.

The daily temple was established a few years ago when, while exploring the terrain in the search of the perfect place to build an information center, the workers found remains of a monastery complex.

Thus, the remains of two temples – an early Christian basilica from V – VI century and a medieval temple from XII – XIII century appeared in the world..

Very close to the „Painted (Written) Church” are located the remains of two other churches – „The white church” and „Saint Nicholas”, and around them are found many foundations of buildings, ceramics, coins and other artefacts that lead the archeologists to the idea that in the Krushe area, where the churches are located, once was situated a big medieval settlement.

„The painted (written) church” is about 7 km away from Razlog to the southwest.

3 km from Razlog, on the way between the town of Razlog and Bansko are located the ruins of the the medieval church „Saint Nicholas”. There is no accurate information about when the temple was built but according to the specialists most likely this has happened in the XIII century and it was destroyed during the Ottoman rule.

From the church’s researches carried out over the years, it is clear that it is a three-conch cross-domed building, built of river and quarry rocks.

The famous for its mineral springs Banya village is located only 7 km away from the town of Razlog, so it will not take you long time to take a trip and explore one of the most interesting sights of the village – the Turkish bath.

The bath was built in XVII century and it has the typical for the time Oriental architecture. The building has two entrances, as the Turks had the belief that they must enter the building from the left entrance when they go to the bath and must leave the bath from the right door when they are already clean.

The legend tells that the bath was built by the Turkish family Murtazovi with money that are earned in a dishonest way… During the Venetian – Turkish war, two brothers of the family were assigned to the army and took part in the war.  Once they sent a gift to their father that had to be delivered to him by one of their friends – a cannon-ball from the front. But the father was offended by this gift and threw it away.

The two brothers returned after the war and asked their father where the gift was. The father, still offended, told them that he had thrown it away. The brothers went to the dunghill and they found the cannon-ball, and when they opened it they found golden coins in it.

The father knew that the golden coins weren’t honestly earned, and to appraise Allah to have mercy on his boys, he decided to build a public bath with the golden coins. His sons agreed, and so the Banya village got a modern bath for that time.

Did you know that there are only three churches in the country, which have the name “Saint Ekaterina”? And do you know that the oldest of them is located 7 km away from the town of Razlog in the „Katarino” area?

The Orthodox temple is a monument of culture and today is one of the most visited sights by the tourists, so don’t miss to see it. The church was built most probably in the early XIV century, but according to the experts, the place on which it was built was sacred to the Thracians.

Dedicated to Saint Ekaterina, the church has gathered the Christians for several years but after the Turkish invasion it was destroyed almost to the ground. Nevertheless, the local people built the church again and it looked the same way as before. Today the little Christian temple is restored and you can see it in its original form as it was when it was built.

How to get from the Lucky Bansko Hotel to the town of Razlog?

If you are one of the guests of Lucky Bansko Hotel and you decide to spend a day exploring the sights of the town of Razlog, it will not take you long to reach the town, which is only about 6 km away. There are enough signs on the road and you cannot lose the right way.