Located in the northern part of the Razlog valley, 13 km from Razlog, nestled in the bosom of Rila and kept as a favorite child of Pirin and Rhodope, the village of Gorno Draglishte is one of the favorite places for domestic and foreign tourists in recent years. 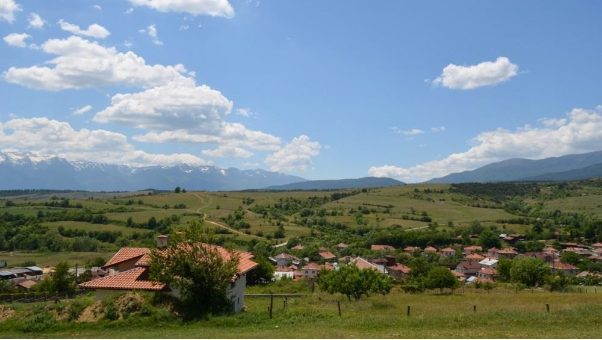 Legend has it that many, many years ago a shepherd named Dragan, following his flock, imperceptibly crossed the Rila Mountains from Mount Aigidik and found himself at the site of today’s village.

The shepherd was captivated by the incredible views that unfolded before his eyes and decided to settle with his flock in this place. It wasn’t long before Dragan started a family thus started the village, which was named after him.

Initially, the village was called Bogato Draglishte and Draglishta, but after one of the nephews of the shepherd settled a little further south, two villages were formed – Gorno and Dolno Draglishte.

The history of the village is ancient, turbulent and full of vicissitudes. Gorno Draglishte has experienced both prosperity and ruin, but it has survived because its inhabitants, who today are no more than 1,000, zealously keep their traditions.

Traditions that are still observed today in Gorno Draglishte

Gorno Draglishte is not in vain one of the villages where Bulgarian traditions are most authentic. The locals not only preserve the family memory, but also to this day – today they observe most rituals, perform them and pass them on to their children.

The village is one of the few where you will be greeted with home-made dishes and while eating jam – sweetly will tell you stories told from mother to daughter and from father to son. It is also one of the few villages where the locals will welcome you in authentic costumes, will perform some of their favorite rituals, performed on major holidays and will sing you authentic songs from the Razlog region.

The magic of this village is irresistible and everyone who visits it once remains captivated not only by the beauty of nature, peace and quiet, but also by its smiling and well-tailored inhabitants. 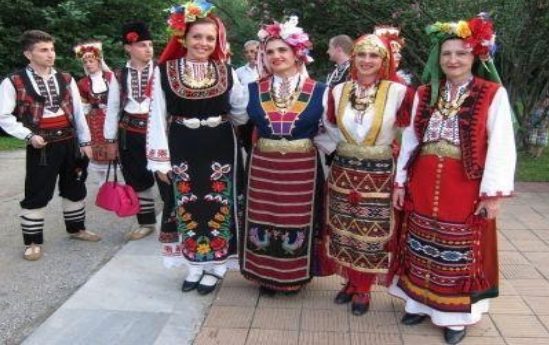 It is impossible to tell you about all the rituals that the people of Gorno Draglishte continue to observe and perform, as they are many and more interesting than each other. But we have selected some of the most important rituals that attract tourists to the village.

In Gorno Draglishte St. Nicholas’ Day is celebrated in a very different way. Unlike other settlements, where fish is prepared on this day and the whole family sits at the table, in the Razlog village an ancient ritual dedicated to the young brides is performed.

Early in the morning of St. Nicholas Day, the young bride’s mother-in-law puts a hat (“fezche”) on her head, on which she attaches a braid woven from a ponytail. A little later, her friends, relatives and neighbors come to her house and each of them brings “braids” (a large round kneaded bread). All the women line up at the table and each holds a “braid” in front of them.

The bride’s godmother jingle with a sheep’s bell, imitating the gathering of the flock. While she is jingling, someone in the family “steals” one or more of the breads. The godmother continues to jingle and count the breads on the table, which “play” the role of sheep.

Once he finds out that there are fewer “sheep”, everyone starts looking for them in the house. Once all the breads are found, it means that all the sheep are gathered in the fold and there will be prosperity in the family.

This ritual is not performed in families today, but if you visit Gorno Draglishte the amateurs at the community center will perform it especially for you. And if you want to participate, the women of the village will transform you into an authentic costume and will include you in the performance of the ritual.

One of the most respected holidays in the Razlog village is the celebration of Christmas Eve. The food that is traditionally present at the table is poor and consists of a few very simple foods:

Special attention is paid to the bread, which the locals call the nascent God. This is the reason why it is called “Bogovitsa”. It must be placed whole on the table.

In some households the so-called Vechernik bread is prepared, which is called the farm.

On this day, it is important for every household to buy a new dish, which must be round and have a bottom, so that it can be “filled” only with good things and have prosperity and happiness in the family.

Before dinner, the family says a prayer and the food is smoked with incense. It is very important to burn incense from right to left, because according to legend, this is how to drive away evil spirits.

Another ritual that is observed on Christmas Eve is the breaking of walnuts. Each member of the family takes a walnut and breaks it to find out what the new year will be like for him. If the nut is healthy and bright, the person will be healthy and happy, and if it is black and spoiled – you have to be very careful.

After dinner, the food is not picked up from the table, because according to beliefs, the Mother of God comes down and tastes the dishes.

Today, on Christmas Eve, a coin or other good luck is placed in the cake, and Badnikis replaced with a decorated Christmas tree. Other dishes such as lean sarma, stuffed peppers with rice, pumpkin, “pie” and others can also be present at the table.

Christmas in Gorno Draglishte begins with the slaughter the pig. This tradition has been observed for centuries and has not changed to this day. By noon, the meat should be “harvested” and begin with the preparation of the Christmas table.

On the festive table the locals put everything they have produced during the year. The table must have:

The bread is also obligatory for the Christmas table, but instead of placing it whole on the table, it is divided into 12 pieces, because the year has 12 months. 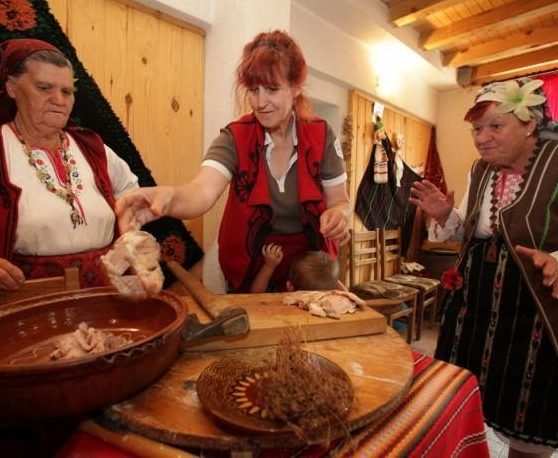 The evening before the holiday, two large clay pots are tied with a red belt. The fastening with the belt imitates the married couple and the connection between them. The pots are half filled with water and all the girls who are not yet married put a flower with a “sign” in the water.

The vessels are left to spend the night with water and flowers and the next day a “call” is made. One of the women mixes the dishes with water and pulls out her flowers one by one, calling which girl will marry which guy.

After the whole ritual is over, the girls go home, where their mothers are waiting for them and take their whole „cheiz“ outside. They distribute it on the fence of the house so that everyone can see how much money the girl has collected.

Today this tradition is no longer observed, but the inhabitants of Gorno Draglishte gladly perform the ancient ritual in front of the guests of the village