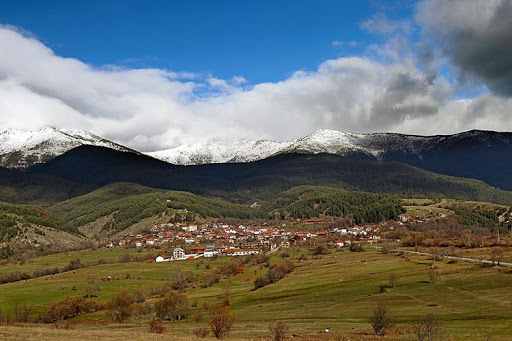 But let’s start from the beginning…

And the „beginning” starts from the southern slopes of one of our most beautiful mountains – Rila. Right there, at an altitude of 1050 meters, 18 kilometers away from the town of Razlog and 17 kilometers away from our most popular winter resort Bansko, cozily nestled in the Razlog Valley, is the Dobarsko village – the star of today’s story.

The history of the village is ancient, so ancient that there is no accurate information with regard to when the village was established on these lands. The first official evidence of the existence of Dobarsko was found in a charter, signed by tsar Ivan Shishman in 1378, in which the village was mentioned as part of the forests, villages and lands that were donated to the Rila Monastery.

At that time the village was called Gnidobradsko, because of the connection of the local people with…the Bogomil movement. We know from the history that the Bogomil movement has been very popular in Bulgaria since the time in which Bulgaria was under the Byzantine rule.

During the Second Bulgarian Kingdom, the village flourished and became the biggest and most important economic center in the region, and due to its proximity to the Rila Monastery it also became one of the major religious centers.

After the Ottoman invasion and especially after the Turks conquered Razlog, Dobarsko village expands even more, because large part of the population of Razlog moved to the village to escape the Turks.

The development of the village continued until the end of XVIII century and the beginning of XIX century, when the small village of Banko that consisted only of a few neighborhoods located on the slopes of the mountain, became a powerful economic center and Dobarsko village lost part of its leading role.

Unique church from the XVII century

The history of Dobarsko village is very interesting, but even more interesting are the sights that await you if you decide to visit this place. If you come, right in the very center of the village you will find the greatest landmark of Dobarsko, which attracts like magnet tourists from all over the world. 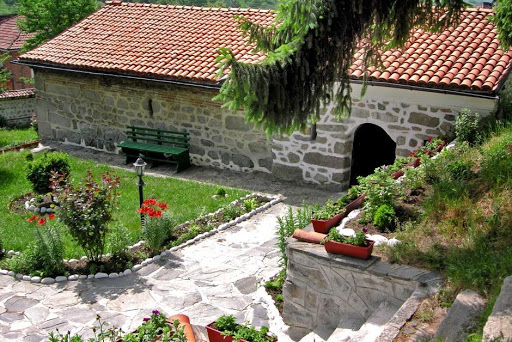 We are talking about the church „St. Tiron and St. Teodor Stratilat”, the story of which is embraced in myths, legends and mysteries…

The church was built in 1614 and is a small three-nave basilica that at first glance does not differ from the other churches built during the Ottoman Rule.  The temple is dug into the ground according to the requirements of the enslavers, there is no bell tower, even windows, only small slits.

However, the similarities with other temples that were built at that time are over.  Once you enter the temple you will be enchanted by the unique frescoes, which cover every centimeter of it. Such a small space has over 400 frescoes and icons, as some of the saints are painted in a way that is nowhere else to be seen.

Interestingly, although it was built in 1614 and painted shortly thereafter, the frescoes are so well preserved that during the modern restoration of the temple, the experts just removed the accumulated soot caused by the smoke of the candles, which have burned for centuries in the temple, and the frescoes became magnificent again.

The yard around the church is also very interesting for the tourists, not only because it is very green and well maintained, but because of the holy spring, which is located there and the associated with it legends.

The legend of the Samuel’s troops

The legend tells that after the lost battle around Belasitsa in 1014, emperor Basil II Bulgar Slayer punished tsar Samuel and blinded his army, then the blind Bulgarian troops headed to the Rila Monastery. Their road passed through Dobarsko village and the soldiers stopped to rest there.

But during the night a big storm started and the soldiers couldn’t continue walking to the Monastery. They made a shelter close to the holy spring in order to wait the storm to pass, but when they began to drink the water and to wash themselves with it, they felt that their pains are relieved. So they decided to settle in the village and to create the Musical school of Dobarsko, which existed until the XX century and helped many blind children.

We mentioned that the village of Dobarsko is covered in mysteries and enigmas, right? Well, if your visit of the church was not enough for you, then you can have a tour to the eight consecrated grounds that protect the village from all sides.

The legend tells that in the past there was a neighborhood in each of the places of the consecrated grounds, and each neighborhood has chosen a centuries-old tree, under which people have laid a sacrificial stone and a Christian cross.

During holidays and rituals (Christian and pagan ones), the people from the neighborhoods gathered around the consecrated grounds and performed their rituals. Later on, near the centuries-old trees, they built small chapels, and nowadays you can see the remains of some of them.

If you start your walk from the center of the village and walk just for a few minutes, you will reach the Shtrokaloto waterfall. This waterfall is 30 meters in height and when it is high-water it is incredibly beautiful. You don’t have access to the foot of the waterfall, but you can enjoy it at the side or from above by climbing the rock above it.

And do you know that in Dobarsko village you can see one of the most well preserved brick furnaces?

Several years ago, during a big storm, a centuries-old tree was pulled from the ground by the strong wind and rain, and a deep hole had opened beneath it. When the rain stopped and the people looked at the hole, brick arches appeared. The people invited experts and they found out that there is a very well preserved Roman furnace.

Although near the town of Bansko is located the Baikushev fir, which is the second by age tree in Bulgaria (1300), you will be able to enjoy another centuries-old tree that is located only 7 km away from Dobarsko village. The tree is about 500 years old and according to the experts it is a Quince fir.

The roots of the centuries-old tree have shown themselves above the earth and have formed a sort of shelter that protects the tourists in case rain starts. And if it doesn’t rain, it is the perfect place to make a selfie.

If you like mountain hikes, the village is a starting point for several hiking trails, which are of medium difficulty. The eco „Trail of the wild goat” starts from Banya village, but its pedestrian part starts above the village of Dobarsko. The route passes near Dobarsko hut, where you can stop and try the delicious homemade dishes, which are prepared only here.

The village is also a starting point for two more eco trails: „The trail of the cock of the wood” and „Rila primrose trail”, which will lead you to beautiful meadows, centuries-old forests, and the views to the peaks of Rila and Pirin will leave you without words.

If you are on a vacation in Lucky Bansko Hotel, Dobarsko is the perfect destination for a day trip to some beautiful and peaceful place.

How to get from Lucky Bansko Hotel to Dobarsko village?

The distance between these two settlements is only 21 km and you will need 25 minutes to get to the village.

You don’t need a GPS, just when you go out of the hotel, you have to take in the direction of Banya village and continue on the road. You will pass through Dolno Draglishte and after a few more kilometers you will reach Dobarsko village.

If you are not in a hurry and you have time, on the way to the village of Dobarsko you can stop by the Banya village, which is famous not only for its mineral springs, but also for its well preserved Turkish bath, or you can stop by one of the equestrian facilities that are located around Razlog, and you can enjoy a peaceful horse ride on your own if you are a fan of this activity.

When you arrive in the village is good to leave the car in a car parking and explore the sights on foot. Dobarsko village is not big, so you will not get tired of sightseeing at all. And a walk in such a beautiful nature is worth it, isn’t it?

Keep in mind that the church is visited by many tourists and if you decide to see it during the summer tourist season you have to get to the village in the early hours of the day.

The other sights you can enjoy without tourist crowds.

If you decide to stay in Dobarsko village, there are several guest houses where you can spend the night. There are also several restaurants where you can taste the local cuisine.

Tip: Try the beans in a pot in Dobarsko village- trust us, you havent tried so delicious beans elsewhere. The village is known for growing beans and the dishes that are prepared with it are incredibly delicious.