Gorno Draglishte is a mountain village located at the foot of Rila Mountain, surrounded by the Pirin and the Rhodopes. It is located about 13 km from Razlog and about 14 km from Bansko. Today the village is becoming a favorite tourist attraction for both Bulgarians and foreigners.

Although it is a small village, it is not inferior to the larger ones. It currently has a population of about 1000 people and has its own electricity, water, sewerage and more, Gorno Draglishte has its own school, kindergarten and community center. 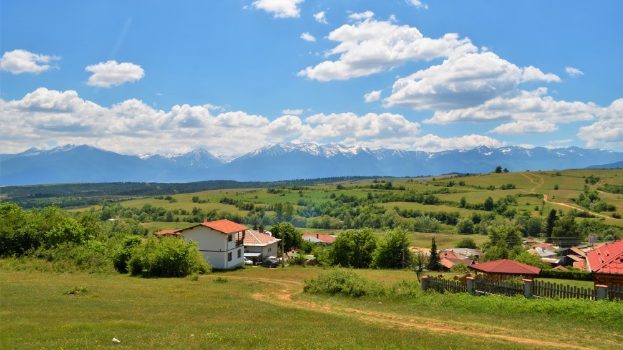 Gorno Draglishte has an interesting history of its existence and brings with it many customs and traditions. There are legends about him about how he came into being and where his name comes from.

The thing that is known for sure about the village is that according to the earliest written evidence, it has existed since 1576. This became clear with the help of the Turkish tax register of the so-called Djelepkeshans in the Razlog district.

Thanks to the written testimony, the fact is clarified that the population in the village was composed only of Orthodox Bulgarians, as well as that initially its name was Bogato Draglishte. As for Christianity in the village is evidenced by the fact that in 1835 the church “Introduction to the Mother of God” was built.

One of the most valuable historical treasures, which has been preserved to this day, is the church “Introduction to the Mother of God”. As already mentioned, it was built in 1835. Although it suffered several fires, thanks to the hardworking and persistent residents of the village of Gorno Draglishte, the church has survived.

Another pride of the village is their school, for which they have fought for many years. The population of Gorno Draglishte has asked the municipality of Belitsa to build a school so that their children can study.

The municipality refuses and insists that it be built between Gorno and Dolno Draglishte so that it can be visited by both villages. They never managed to understand each other.

In 1939-1941 a full junior high school was built to serve students from Gorno and Dolno Draglishte, as well as from Dobarsko. In the beginning, rooms from the houses of volunteers were used, but since they were not adapted for the purpose, at a later stage the school was built, which you can still find in the center of the village.

The whole village is surrounded by several churches, these are “St. Trinity”, “St. Georgi”, “Petrova tsarkva”and“Sv. The Mother of God”. At the very beginning of Gorno Draglishte you will find the chapel “St. Nikolay the Miracleworker”. Apart from the churches and the school, the village also has a community center, which was established in 1938 and develops an extremely rich folklore activity.

Apart from the historical monuments left in the past, in the village of Draglishte you can enjoy the beautiful views and nature that it has.

This area has interesting places to visit. For example, near the neighboring village of Dobarsko, you can jump to the waterfall Strokaloto, whose view is very picturesque.

Near the village of Gorno Draglishte there is a horse base located in the village of Bachevo. Razlog is also a few kilometers away. There you can visit the Historical Museum “Nikola Parapunov”, which is a cultural monument.

If you have more time, you can go over Razlog, to the Golak area, from where you can enjoy fabulous views of the Razlog valley and the three mountains – Rila, Pirin and Rhodope.

Legends about the village

As there is not much written evidence of how the village came into being, there are interesting legends.

According to a legend, 600 years ago and more, a shepherd named Dragan climbed Mount Aigidik and saw on the southern slopes of Rila how the snow cover was torn faster, which he judged for himself and decided to move there to lives with his family.

Thus, it is believed that the name of the village Draglishte comes from Dragan. However, during this time his nephew moved south and from there Draglishte split into Upper and Lower.

In addition, according to another legend, later in the village of Gorno Draglishte there were new settlers, namely Bitolchani, persecuted by Albanians. For this statement it can be said that there is a dose of truth in it, as it is known that instead of Ivan, Hristo and Georgi the addresses Vanete, Ristete and Gorete were used, which were typical for Bitola.

And they were not typical and were never used by neighboring villages.

Another legend says that the names of the locality Bezdrigyanova livada and the bezdrigyanka in the locality Ablanovo are derived from the name Bezdrigyan – the name of a man who moved to Gorno Draglishte from Bitola.

Whether or not these legends are true, no one can claim when there is no written evidence to that effect. Maybe the truth is somewhere in the middle, but they have been carried and continue to be passed down from generation to generation, to keep them alive.

How has the population changed?

The population was then known from the “Ethnography of the provinces of Adrianople, Monastir and Thessaloniki”, which described the male population from 1873 in the village. According to her, there were 600 inhabitants (172 households), all of whom were Bulgarians.

Later, in 1891, Georgi Strezov (Bulgarian scientist, historian and lawyer, son of the famous educator Yanaki Strezov) described the village as a “rocky and steep place”, and the inhabitants as poor people who moved to foreign places, to seek their happiness and peace.

In addition, it is clear from what has been written that then Gorno Draglishte had not only a church but also a school with one teacher and up to 80 students. And the households in the village number about 250.

Then, around 1900, the then-famous statistics of Vasil Kanchov “Macedonia. Ethnography and Statistics”, shows that the population is about 1200 people, all of them Orthodox Bulgarians.

Today the population is about 1000 people. This is one of the few villages that is known that since its inception to this day its population are Bulgarian Christians.

The village during and after slavery

Gorno Draglishte was part of the Ottoman Empire even after the Liberation. It joined the Principality of Bulgaria only in 1913 by under the Treaty of Bucharest.

The times under Turkish slaverywere hard, the inhabitants of Gorno Draglishte could barely stand it. Poverty was part of the people at that time. Taxes were constantly rising, and the thefts of the Turks did not stop. This has led many young people and families to flee and find their “happiness” in a better place.

In the period from 1878 to 1903, most of them settled in Gorno Sahrane, Kazanlakregion or went to work in Serski, Dranski and Seloovski districts. This poverty and deprivation forced the children to work as well, and they were paid for their work.

The whole life of the inhabitants of the village of Gorno Draglishte was slavish. They had to sleep in very bad conditions. The roofs of the rooms were thatched, the walls unplastered.

They used vegetable waste that served as their bedding. No fire was lit in these rooms. And their main food was porridge and beans.

Often people have asked so that they can help themselves with food. In addition, their hygiene was quite poor, which inevitably led to quite common diseases of the inhabitants of the village of Gorno Draglishte.

The men’s shirts were washed only in the spring, which helped to breed lice. Like worn-out clothes, they did not burn, but shook over the fire to kill the lice and put on their clothes again.

What legacy has he left?

Despite all the difficulties and hardships that the people in the village of Draglishte faced, with their honesty, cohesion and diligence they have preserved the village to this day and have managed to leave a legacy.

In addition to the preserved church, school and community center, here people keep their traditions and customs, which is one of the most valuable heritage we can have.

Preserved traditions and customs are the most authentic, passed down from generation to generation. In this cozy village you will be greeted warmly with delicious dishes dressed in costumes. The people in it are open and friendly, so you can’t help but fall in love with it and it will leave you with a warm memory.