22 km away from Sandanski, in the immediate vicinity of the natural landmark Melnik Earth Pyramids, is located Melnik – the smallest town in Bulgaria with population of only 325  residents.

Nestled cozily on the southern slopes of the Pirin Mountain, Melnik is famous for its good wine, delicious food, the old houses and ancient history.

If you are going to visit the Pirin region and haven’t yet visited the town, do it because you won’t regret it, as well you will be enchanted by the beauty of this heavenly place.

The town is pleasant for visits in all seasons of the year, so you can visit it even in winter, if for example, you want to take a day off from your ski season in Bansko.

While you are considering our recommendation, we will tell you a bit more about the history and sights of Melnik.

When exactly the people have settled in these places can’t be said for sure, but according to a number of artefacts found over the years, it is known that the territory of present-day Melnik has been inhabited since ancient times, and one of its first settlers were from the Thracian tribe Maedi, to which the famous Spartacus belonged. 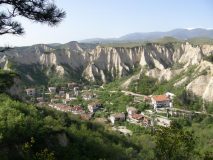 Over the centuries these places have been inhabited by Romans, Byzantines and Slavs, as the latter have given the name of the village – Melnik. According to the historians, the Slavic translation of „mel” means white clay or chalk, and by giving this name to the village the Slavs actually named it at the beautiful pyramid formations that are still rising to this day in the immediate vicinity of the town.

Again without conclusive evidence and only based on the discovered archeological data, the specialists have a theory that the settlement was most likely formed in the early Middle Ages, around a security fortress that was built after the conclusion of Bulgarian – Byzantine peace treaty.

During the different periods of the Middle Ages, the town fell under the rule of Byzantium, Nicaea, Serbia and Bulgaria.

The first official information about the town is from 1215, when Melnik became a capital of a feudal principality, ruled by the nephew of tsar Kaloyan – despot Alexius Slav.

During his rule Melnik has become a big, modern and important town. New churches and buildings were constructed, the town was well fortified, and not far from it, on order by despot Slav, was built the monastery cloister „Holy Virgin Spileotisa”.

In other words, during the rule of despot Slav, the Medieval Melnik was important cultural, commercial and religious center, and it had more than 10 000 residents.

In 1230 the independent principality joined the Kingdom of Tarnovo, and in 1395 fell under the rule of the Ottoman Empire.

In the first centuries under the Ottoman rule, Melnik has suffered very dark and hard times, as many other towns in Bulgaria.

The recovery of the town began at the end of XVIII and in the beginning of XIX century, when the wine and tobacco production in the region started to flourish again.

The traditions of wine production in Melnik began in the Middle Ages, when at the tables of the Byzantine, Frensch, and even the Spanish aristocrats, there was always a jug of thick, aromatic red Melnik wine.

During the Revival period the wine producers in Melnik revived their traditions and the traders managed to popularize the wine throughout Europe and to restore the „Road of Wine”, which started in the Middle Ages exactly from Melnik.

Unfortunately, by the end of XIX century Melnik has started to decline, because it remained out of the main road of the Struma River. During this period many families left the town, and headed to different parts of the country or to Greece in the search of a better life and livelihood.

Melnik remained in the Ottoman Empire until the Balkan War, when in 1912 the town was released by the band of Yane Sandanski.

The elixir of Melnik

The secret of the famous wine of Melnik is in the special variety of grapes from which it is produced, as well in the unique technology of preparation and ageing.

The climatic conditions of Melnik, the sandy soil and the large number of sunny days favor the cultivation of the „Shiroka Melnishka” grape variety, and even nowadays from this type of grape is made the unique wine of Melnik.

The wine aged for many years in huge wooden barrels, which the wine producers of Melnik put in intentionally excavated tunnels under the town, that are kilometers long. The tunnels had the perfect temperature for ripening and aging of the wine, and the grape variety had rare biological aging properties.

In fact, wine is still produced in the same way in Melnik and if you decide to visit the town while you are enjoying the ski season in Bansko, you can enjoy it at first hand (and glasses).

What you shouldn‘t miss to see if you decide that Melnik is the ideal destination for a day trip?

The moment you enter Melnik first you will be fascinated by the architecture of the town. The narrow, winding streets, the white-washed houses nestled close to each other… the whole atmosphere of the town preserved its architecture and spirit from the Revival times. 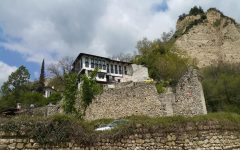 The sights that you can see in Melnik (besides the wineries of course) are many, but the most impressive sight for every visitor of the town is the famous Kordupolova house.

The magnificent building from the Revival period was a home of the rich merchant and wine producer Kordopulos.

The house was built in 1754 and it is a masterpiece of the architectural art of the Melnik masters. The building has a huge residential part with spacious and bright premises, there is even a sauna, winter and summer gardens (something unseen for that times). The remarkable building is 300 square meters in size and it is the largest house from the revival period, not only in the country but also on the Balkan Peninsula.

Real fascination, however, provokes the labyrinth of tunnels under the house, in which Kordopulos had kept the wine. The tunnels have a length of 180 meters and according to the legend were required 10 years of heavy hand work to dig them.

Not far from the Kordupolova house is located another great sight to see in Melnik – Bolyarska house (or whatever is left of it).

The Bolyarska house is rising on one of the highest places and it was a residence of despot Alexius Slav. Over the years, the house has been rebuilt and upgraded many times, and like all other important buildings during the Middle Ages, and especially during the Ottoman rule – it had been destroyed.

Today, from the Bolyarska house that once was famous for its beauty, there are only a few walls to remind of its past glory and majesty.

If you like to get familiar with the history of Melnik in a concentrated version, then you should visit the Pashova house, built in 1815, where today is located the Historical museum of the town.

The town’s museum is located in the eight rooms of the house, and in it there are interesting museum exhibits, that describe the life and lifestyle of the town during the Revival period.

You won’t be disappointed if you go a bit out of the town and reach the „Saint Nicholas church” and see the remains of the fortress of despot Slav. It is true that both sites aren’t well preserved and you can see mostly ruins, but be sure that you will feel with all your heart and soul these sights. (And after decent meals and drinks in one of the many wineries in Melnik, one short walk to the Saint Nicholas plateau, will be good for you).

Speaking of Melnik, we can’t miss the Melnik Earth pyramids, that seem to watch over it. The natural formations attract the interest of tourists from all over the world, and they arrive in Melnik only to see them from afar. The unique sand creations are up to 100 meters high and they have bizarre shapes that look like cones, mushrooms, pyramids and other.

The Melnik pyramids can be admired from a distance, comfortably seated in one of the many wineries with a glass of Melnik wine in hand, but you also can enjoy them closely if you decide to take a walk and choose one of the eco trails that pass through them on the way to the next landmark of the Melnik region – the Rozhen monastery.

While you are in Melnik, there is no way to miss visiting one of the most preserved medieval monasteries in the Pirin region. The Rozhen monastery is located just a few kilometers from the town and about a kilometer or two away from the Rozhen village.

We talk about landmarks but we always go back to wine, when it comes to Melnik, right? In this line of (wine) thoughts we advise you to visit the Wine Museum, which since 2013 gives joy to the lovers of wine tourism in the town. 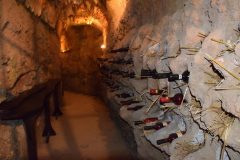 In cellars under the ground (as the wine-making tradition of Melnik requires) are arranged interesting expositions which tell a story about the wine production in the region from the ancient times to the present day. However, visitors are most interested in the degustation cellar and in the place where the wine is aging.

For the biggest fans of this drink the museum offers one very interesting surprise. Anyone who wants can fill his cup and make a bottle of the wine on the authentic press.

The best thing is that you can buy a bottle (or several bottles) of the most famous wines of Melnik and bring it home.

One crazy idea… If you visit Melnik during your ski vacation in the winter season in Bansko, and you buy wine from the town, you can organize one wine night with friends and compare the taste qualities of the Melnik wine and the wine,  that is produced in Bansko.

It is true that Melnik is the smallest town in our country, but if you decide to visit it, it will find a big place in your heart for sure.