Did you know that near the town of Bansko there is a place that has attracted the interest of the tourists who choose the resort for their summer vacation in recent years?

If you have chosen Bansko this summer, you may find it interesting to know a little more about the Ribarnika locality and why it is so popular with the locals and the tourists.

Ribarnika has a very interesting history, which starts with the first Bulgarian partisan – Ivan Kozarev. 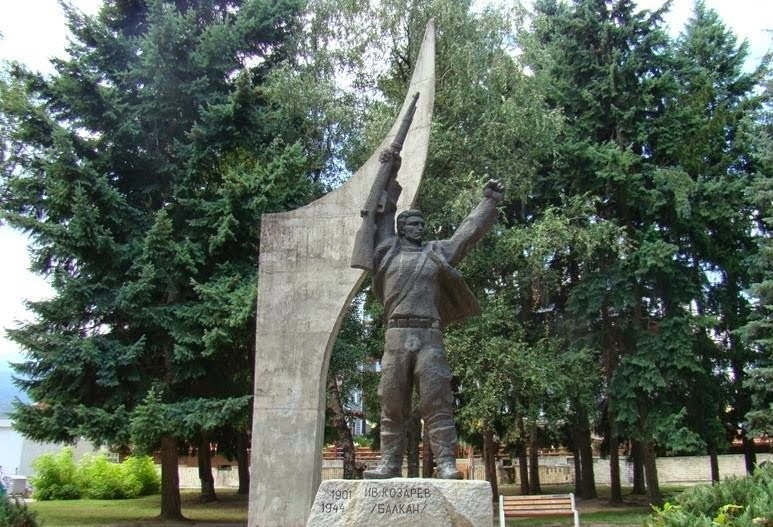 Have we surprised you?

Here is a true partisan story… Ivan Kozarev was born in 1901 in Dobrinishte and he spent his childhood and adolescent years passed in the town (a village then). In 1923, the unruly young man took part in the September Uprising and in 1925 he became a member of the IMRO.

His membership in IMRO later became the cause of his persecution, multiple detentions and imprisonments. After serving his final sentence, Kozarev went underground. And then (in 1941), hiding in the Strugo area around Dobrinishte he created breeding-pond (ribarnik).

In the summer of 1941, the authorities tried to capture Kozarev, ambushing him at the breeding-pond, and during the shooting, Ivan shot two policemen. He managed to escape and so the partisan movement is launchednot only in Bulgaria but also on the Balkans.

A little later, together with Nikola Parapunov, he created the first partisan squad in Bulgaria and took the partisan name Balkan. Ivan Kozarev died from friendly fire in 1944 near his native place Dobrinishte, and the area, which until then was called “Strugo”, was renamed by the locals to “Ribarnika”.

Nowadays, you can hear a few such (partisan) stories, but that’s the story of the Ribarnika locality and we cannot help it but tell you about it.

What awaits you today at Ribarnika?

Three beautiful mountain lakes are located on an area of about 8 decares where fish are grown for sport fishing. The lakes are stocked with Balkan trout which weighs from 0.250 to 0.500 g. 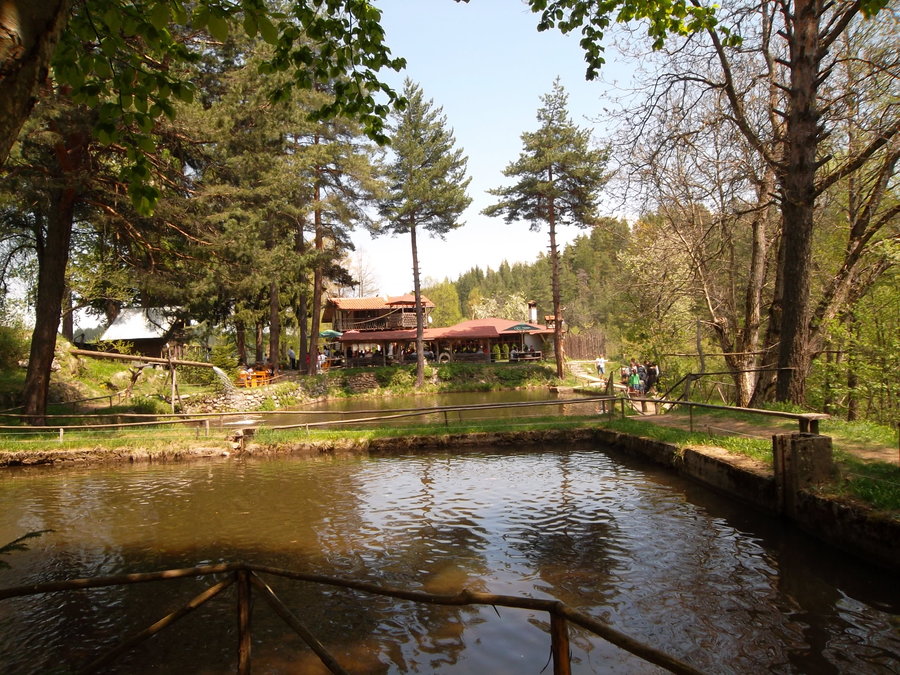 The place is extremely attractive, peaceful, pleasant and if you are a fan of fishing, this is your place to relax. The area around the lakes is very well maintained and the Balkan trout with which they are stocked is waiting for you to outsmart it.

And the best thing is that you do not have to bring fishing tackle from home, because the people working at the Ribarnika locality have thought about everything. You just have to come and you will not only be provided with all conveniences for comfortable fishing, but also with the tools you need.

If you are not a fan of fishing, but you enjoy eating fish, there is a great restaurant in the area, where you can prepare freshly caught Balkan trout from traditional banana recipes.

The restaurant is very popular among locals and the guests of Bansko and Dobrinishte who are looking for an elegant and stylish place to eat fresh trout, prepared deliciously and served with refinement.

You can participate in competitions individually or in family, and the photos of the event are mandatory. (Because when you get back home and brag about the experience, you better also have some photos, right?)

Where is Ribarnika located?

How to get from Lucky Bansko Hotel to the Ribarnika locality?

From Lucky Bansko Hotel you have to leave the town in the direction towards Dobrinishte and drive along the main road. Once you get to Dobrinishte, you have to continue towards Gotse Delchev mountain hoteland after about 4 km you will reach the Ribarnika area. The road is good, the distance is short (it will take you at most 10-15 minutes) and there are enough signboards so there is no danger of going wrong about it.

In addition to enjoying a quiet day in nature, enjoying fishing you can use some of your time to visit several other places that are close to the Ribarnika locality.

Several ideas for walks around the area

From the Ribarnika locality to the Bezbog peak and back

If you are looking for a beautiful place nearby while you are in the area, make a trip to Bezbog Peak – you will not be sorry at all. 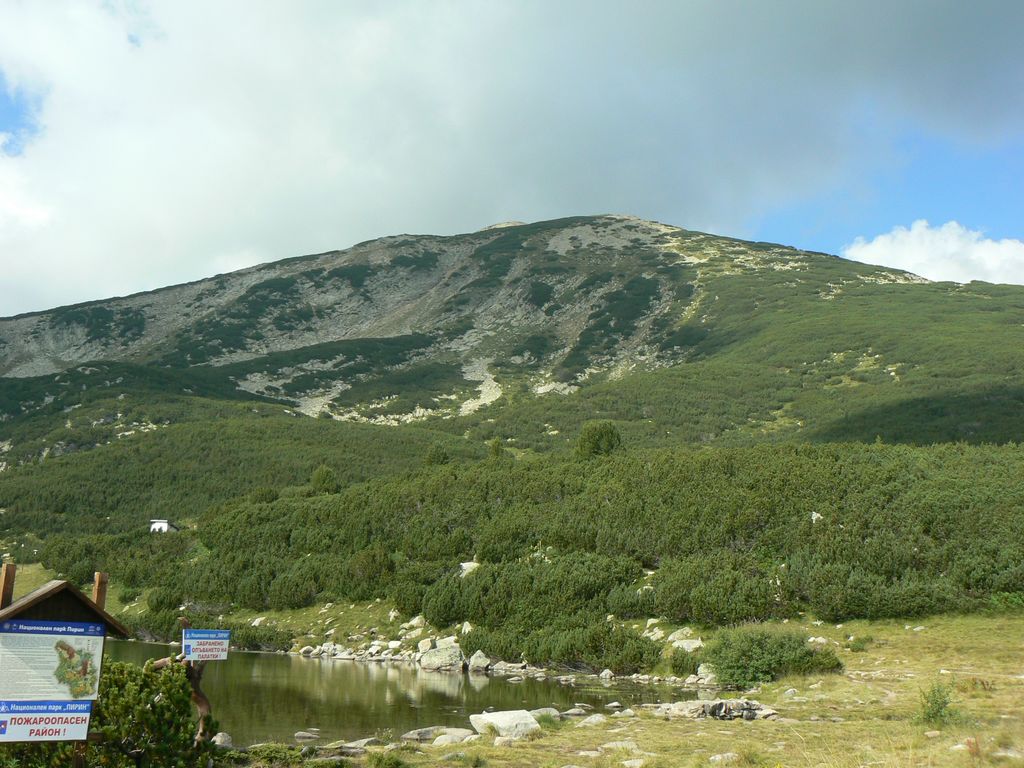 Bezbog peak is 2,645 meters high and is located on the Polezhansko plateau in the Pirin Mountains. Although not the highest, the Bezbog peak is one of the most beautiful and easily accessible peaks in Bulgaria.

Its name (as you can guess yourselves) means something that brings misery, and so you will find many legends about it in which there are fierce massacres, misfortunes and other unfortunate events.

Legends of Bezbog peak are really numerous but one of the most popular ones is that during the Turkish invasion in the country, a large part of the population from the nearby villages hid at the top in order to preserve their faith. Unfortunately, the Turkish bashi-bazouk found them very fast and a massive slaughter occurred in which all people were killed.

Another legend says that the god Perun had a beautiful daughter who lived near the Samodivski lakes. The beauty fell in love with god Bes who wanted her to be his wife and decided to steal her.

The brother of the beauty – Jengal went after him; he caught up with god Bes on Bezbog Peak and killed him with stones. (True or not, to this day you can see a huge heap of stones standing on the top).

How to get to Bezbog mountain hotel?

The lift is open, two-seater, works all year round, and the time you need to get to the mountain hotel is about 30 minutes. (It is a curious fact that when the chairlift was discovered in the 1980s, it was the longest lift in Bulgaria – 3,500 meters).

The time which you will spend going higher and higher up in the mountains will leave you with great memories. You will enjoy the incredible views that will be revealed before you, and your soul will feel light and joyful.

The lift will leave you at the upper station, which is right next to the Bezbog mountain hotel. Here, there are a few options: you can sit on the porch of the mountain hotel with a glass of fragrant tea and enjoy the wonderful views or you can continue your walk to the nearby lakes.

If you do not into the walks, the nearest lake you can see is the Bezbozhkoto lake which is located next to the mountain hotel. (The lake is a glacier lake and its depth reaches 7 meters).

However, if you want to enjoy the walk until the end, we advise you to go to Popovoto Lake or Papazgyol(as the locals call it).

How to get from Bezbog mountain hotel to the Popovoto lake?

The transition to the lake will take no more than an hour and a half; the terrain is of medium difficulty (if not quite easy and pleasant, without great displacement and very steep slopes). 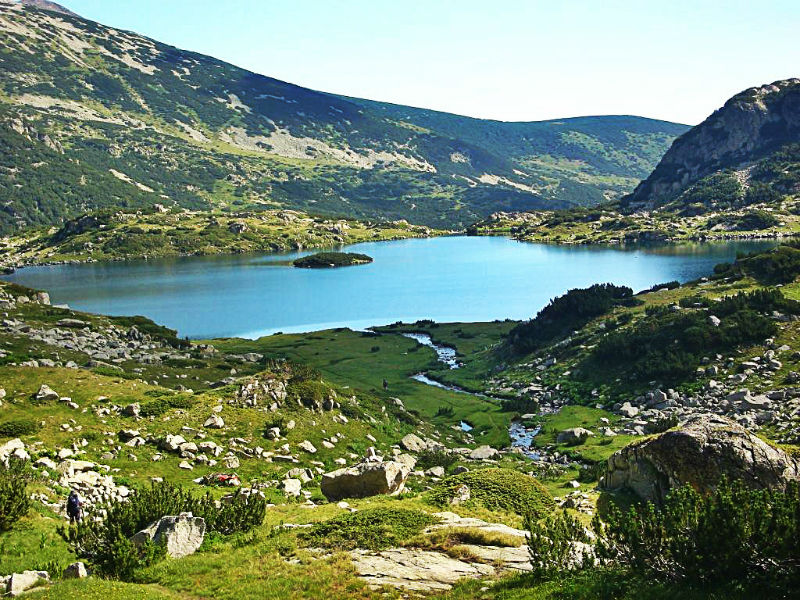 If you decide that you want to reach the largest lake in Pirin, you have to take the marked path from the Bezbozhkoto lake, which you will see on the right and… that’s’it. There is no way to go wrong, you will not get tired either, and after an hour and a half you will see one of the most beautiful lakes not only in Pirin but also on the Balkans.

Popovoto lake is not only the largest lake in Pirin (it is located on an area of 120 decares and is 30 meters deep), but it is the second largest mountain lake on the Balkans.

The local people tell a legend that a priest (pop in Bulgarian) was drowned in the lake many years ago, and his kalimavkion floated above and formed a small island in it.

Today, the lake is one of the most visited places to organize a picnic in the nature, so nothing prevents you from also having a picnic there.

From the Ribarnika locality to the mineral beach in Dobrinishte

If the fish is not biting or after the abundant lunch at the restaurant located here you are willing to make get some tan, you can go by the mineral beach of Dobrinishte.

How to get to the beach?

If you are leaving from Bansko you will have to get to the center of Dobrinishte. Just 200 meters from the center you will find the complex with pools with mineral water. The mineral beach has open-air (indoor and outdoor) bars, a children’s pool, a playground with entertainment, and more.

If you are leaving from the Ribarnika locality, you just have to take the direction of Dobrinishte – you cannot go wrong.

The area around Bansko is filled with many other landmarks (both natural and cultural, and historical) so there is no need to worry that choosing the resort for your summer vacation you might be bored. This cannot happen because everyone here can find something for themselves. But whatever you decide to do, however you may be having fun, take at least a day to visit the Ribarnika locality- you won’t regret it!