With its height of 2908 meters, Kutelo peak is the second highest peak in Pirin – just after the 2914-meter-high Vihren peak. It’s also the third highest among all mountain peaks in Bulgaria, and it definitely stands out with character.

If fact, Kutelo is a double peak with a small saddle in the middle – making it a double challenge and a double delight. Below, you will learn all there is to know about the location and specifics of this double beauty, along with the different ways to reach the top. 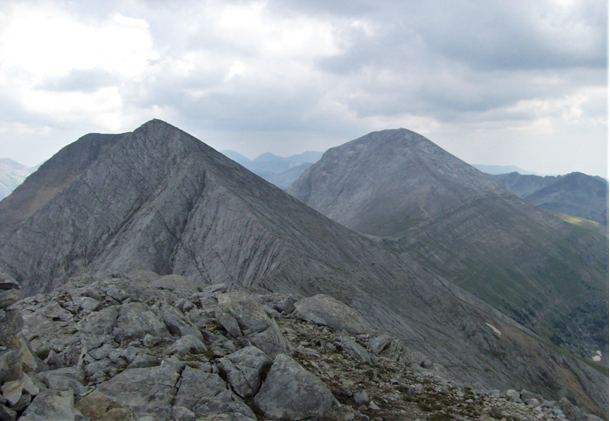 Peak Kutelo is located in the northern part of Pirin National Park in Bulgaria, between Vihren and Banski Suhodol mounts. It’s positioned on the main ridge of the mountain and consists of several peaks with minimal differences in height. These peaking rocks are located on an almost horizontal edge, thus forming a rather mesmerizing view.

Pirin’s second highest peak is built of marble rocks, and its slopes descend steeply (in places almost vertically) to the surrounding valleys and circuses.

On the slanting western slope of Kutelo, you will find the rocky track between Yavorov hut and Vihren hut: one of the marked tracks in Pirin worth walking if you’re a nature connoisseur. Anyway, the waterless cirque to the north-east has snow drifts all year round, so you should be careful and well-equipped.

On the other hand, the Premkata saddle and the Koncheto saddle connect Kutelo with its neighboring mounts – Vihren peak and Banski Suhodol peak.

There are several starting points from which you can begin to climbing Kutelo:

Below, you can see details for mounting Pirin’s second-highest peak using each path.

The starting point of this route is Vihren hut, which can be reached by car. If you are on holiday in one of the hotels in Bansko, you should leave the city and enter the mountain in the direction of the hut. After about 20 – 25 minutes, you will be up and ready to start climbing Kutelo. 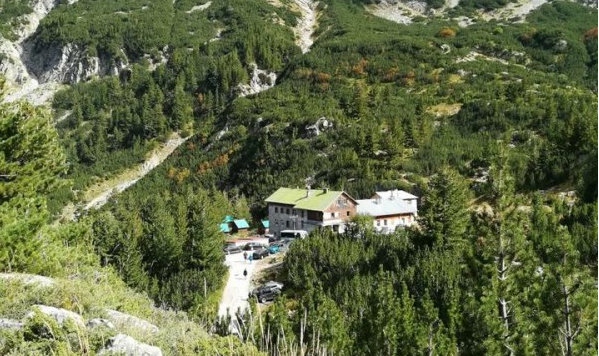 The trail starts a little above Vihren hut, or about 200 m, to be precise. This is the tourist trail, which tourists call “Royal.” It is marked in red, but even without markings, you can not go wrong, because all summer it passes tourists who decided to climb Peak Vihren.

This path has a few different sections, thoroughly described below.

The beginning of the transition is relatively easy, as the trail does not have a large displacement. After about 25-30 minutes, you will reach a turnout that separates the “Royal Path” from the path to the area “Kazanite”.

The classic route to Vihren peak continues to the left and up, while the path to Kazanite continues straight.

You will pass the first few hundred meters of the route without any problems, as the beginning of the trail is relatively smooth. Then comes the most complex and dangerous part, as you have to go through a small section, on one side of which there is a precipice.

If you cross this section, the path widens, and the ascent is now, if not easier, then at least safe. Then, after a little more load, you will reach a place where the route from Vihren hut and the one from Banderitsa hut meet.

The two paths merge into one. Then, the route passes through high squats and cuts through the circus Little Kazan and enters the Big Kazan, on the hill of which is the shelter “Kazana”. When you get there, you’ve been halfway to the top. Here is where it is a good idea to relax a little more and enjoy the beautiful views of the mountains. 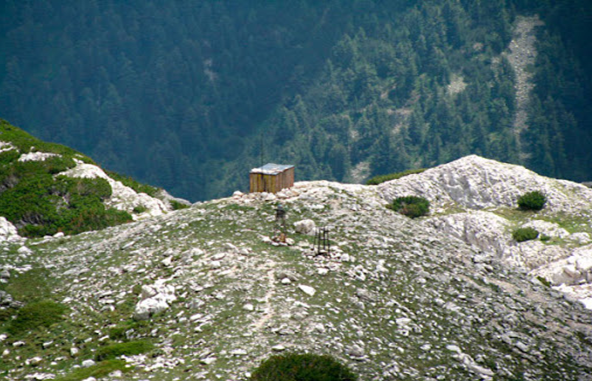 To reach Kutelo peak, you must first pass through the Premkata saddle, which connects Kutelo with peak Vihren. Therefore, you must either continue walking on the marked path for the “Premkata” or continue straight up the unmarked path.

If you choose the second option, it is good to know that this route, although more popular among tourists, is not approved by the Pirin National Park. Therefore, it is not an official route to climb Kutelo, and crossing it is not allowed.

Climbing through the “Premkata” can be a little difficult for you, as the path up is quite steep and rocky. Following the path, you must go to the right on the slope of Kutelo. This stage will take more than 40 minutes, as the displacement is large, and the path you have to walk is covered with stones and rocks.

Approximately in the middle of the climb, the trail splits again. The trail marked in red continues to a narrow karst edge called Koncheto, and the unmarked trail continues to Kutelo Peak. You, quite logically, have to take the unmarked path, which then has no more than 200 meters to the top.

This route is quite popular among tourists. The distance from Vihren hut to Kutelo peak is about 3 – 3.30 hours (in one direction), and the difficulty level is average.

This route is relatively shorter, and it will take you about 2 – 2.30 hours to climb to Kutelo. The starting point is Banderitsa hut, which can be reached by car. When you get there, you will see a path in green markings (for the shelter “Kazana”), which you must walk.

In the beginning, the hiking trail is without much load, but after about 20 minutes, it becomes quite steep. Finally, the route passes through the forest, goes over a high squat, and cuts through the Little Kazan.

After an even more severe load, you will reach the turnout where the paths from Vihren hut and Banderitsa hut meet. From here on, you can continue to the top of the route described in detail above.

The route with a starting point in Yavorov hut is the longest (and most difficult) and will take about 10-11 hours. Therefore, if you choose it, it is advisable to plan your time well or to provide a place to spend the night.

To start the climb, you must first reach the Yavorov hut. Unlike the other two starting points, which you can reach by car, you will have to walk to Yavorov hut. If your adventure starts from Bansko, you should leave the city and head to Simitli.

Shortly before the town, you will see a turnout to Betolovo. Drive to Betolovo and look for the sign of Pirin National Park. When you reach it, leave the car and take the marked path to Yavorov hut. The markings you must follow are yellow, the trail has a low level of difficulty, and it will not take an hour to reach the hut.

When you reach the hut, you are ready to start the transition to Kutelo peak. The route is part of the international walking route E4 and is marked in red. The path that will take you to the “Koncheto” is already known to you.

Once you get there, however, instead of taking the path that turns right and continues down the slope, you should continue along the edge of the “Koncheto.” Passing this stage is done by moving along the edge and holding on to metal ropes.

If you successfully pass through this dangerous section, you have a few hundred meters left to climb Kutelo.

If you have enough experience in mountaineering, you can even climb the two highest Pirin peaks in one day. As we already explained above, the Premkata saddle connects Kutelo to Vihren, making it a perfect opportunity for hardcore mountaineers.

So, let’s describe the phases in this route.

The starting point of the combined route is again Vihren hut. The path you must take is in red markings and leads along the classic tourist route to Vihren peak.

You will follow it for a while until you get to the point where it splits. Then, instead of going to the “Kazanite”, continue on the “Royal Path”. Follow the markings, and you will not go wrong.

The path gradually becomes steeper, but after half an hour of climbing, you will reach a flat meadow, where you can relax and enjoy the views. Then, after a short rest, the real load awaits you, as you have to go through Kabata before attacking the top.

Finally, after about 30-40 minutes of climbing the steep slope, you can congratulate yourself on having conquered the highest peak in Pirin.

The descent during this phase is quite steep, so you have to be careful not to slip. After about an hour of walking, you will reach “Premkata” and Kutelo peak. The path that leads to Kutelo is quite narrow, slippery, and rocky, so be careful.

Crossing the edge of the “Koncheto” is a real challenge, and if you are afraid of heights, we do not recommend you to cross from there. However, if you manage to cross it, you just have to follow the path to the shelter “Kazana” and go along the red markings to return to the hut Vihren. 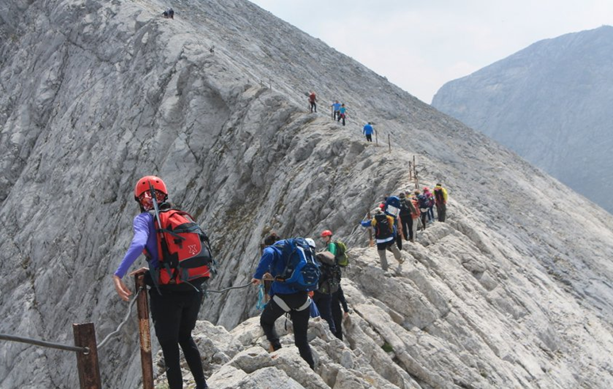 If you do not want to return to the hut again, you can take the turnout to the Banderitsa hut.

In addition to the popular tourist routes we have introduced, there is another to make a transition to Kutelo, which starts from the hut “Zagaza”. This hut is located south of Albutin peak.

To get to it, you have to go from Bansko to Kresna. If you get there, you must continue driving 15 km on an asphalt road to the Varbite area, then another 11 km on a dirt road to the Peshterata area. Once you reach the site, leave the car and walk along the brown-marked path to the hut.

From the hut, you should follow the path marked in brown to Albutin peak. After climbing the top, you continue along the ridge, following the path in red markings (the path is part of the route with a starting point Yavorov hut). From there to the ascent of Kutelo, you already know the way.

As mentioned at the beginning, Kutelo is a double peak with a small saddle, so Kutelo and Kutelo II are connected. 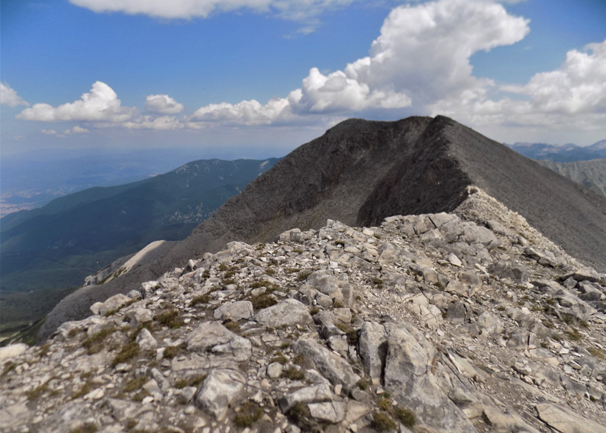 Helpful Information if You Want To Climb Kutelo Peak

Although climbing Kutelo Peak is not as challenging and complicated, it is not as easy as you think.

Therefore, if you do not have much experience in mountaineering, our advice is not to go alone but to trust experienced mountain guides. You can rent them at the information center in Bansko or ask the hotel where you are staying to provide them.

Last but not least – be very careful, go out in the mountains well-equipped, and always ensure you have enough food and water in your backpack.