In Bansko, the Old town is of national importance to Bulgaria. Not only because it is one of the few places in our country, where the antiquities are preserved in such an authentic way and in a very good condition.

In Bansko the Old town is unique with the Bulgarian Renaissance houses which, in their way of building, the location of the rooms and the connections between them, are distinguished from the rest at that time in the country. The Old City tells a story filled with, uplift, troubling times and dramatic events. 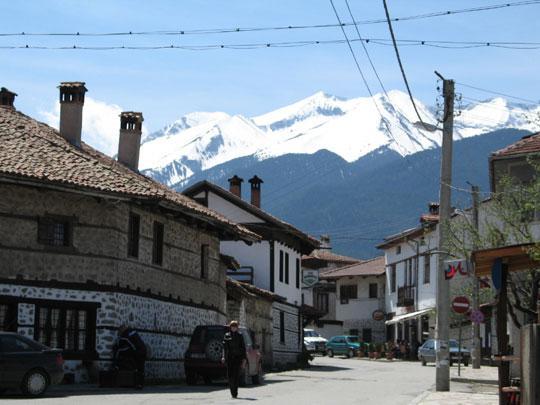 The Bansko region has always been wealthy but during the Bulgarian Renaissance period a rapid economic upsurge starts. To the traditional agriculture and livestock breeding already are added many crafts. A busy trade starts in all directions – both towards the Aegean Sea and towards Western Europe. Bansko people export mainly wood, leather, hardware and carpentry goods; many of them open offices abroad and their businesses grow. The most striking example of this are three brothers from the Germanovi family. They become bankers and lend even to countries.

This benefit naturally affects also the improved life in Bansko. At the same time, however, there is slavery and insecurity for the Bulgarians, the Ottoman authorities isolate them, hinder them, extort and harass them. For example, Lazar German, the mayor of Bansko, who has remained in history, was tortured to death in connection with the construction of the Holy Trinity church. The church was however finished and inaugurated in 1837.

In addition to the harassment of the authorities, many Kardzhali gangs infested, but because they were attacking the “rayah”, the government did not try to pursue them. The biggest one was the Shaban Gega’s gang which even rushed into the city and plundered. In 1810 Voivode Terzi Nikola with his cheta (armed band) attacked the people of Shaban Gega during a feast and killed them. Thus, he saved the Christians from a great oppression, his name remained in history – in Bansko today there is a street named after him.

In Bansko, during the Bulgarian Renaissance the Old town is the most developed and socially arranged settlement in the whole region. Many crafts flourished here and a busy trade was carried on; in the vicinity there were sawmills, tanneries, mills, fulling-mills for textiles, etc. Bansko is now definitely a town-type settlement with commercial connections all over Europe, even up to England, although the transport links for people and goods were slow. 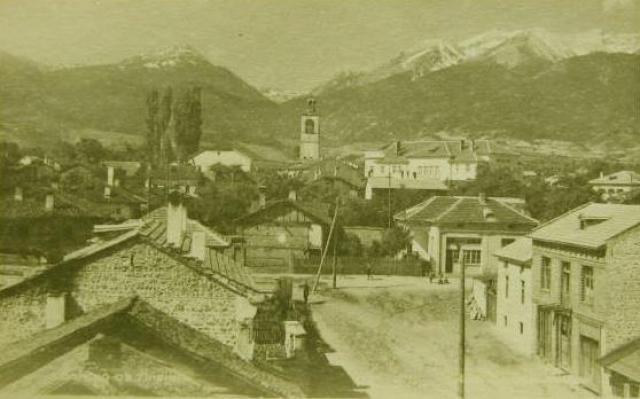 Otherwise, Bansko – of course, has a much older story. The name of the village of Bansko is found in a written document dating back to 1576 – a sheep registry. It is believed to have been formed a long time ago by the merger of various neighborhoods, the main livelihood in which until the 18th century was livestock.

Bansko became a municipality around 1850. However, the social organization here was at a very good level even from before then. A strong act of the autogovernment is the public council of 1833, formed for the construction of the Holy Trinity church. It managed to organize and contribute in the building of the church donations from 270 families, as well as individual donations – 1,081. It organizes a huge amount of work, including the distribution of voluntary work of Bansko people – there were 350 people working together on the church.

In 1835, secular education was introduced here for which the church board played a role. It buys a house for teachers to come and teach on the model of the Gabrovo secular school, which is the first in our country.

The management of the Bansko Municipality is assumed by the most prominent artisans and merchants who continue the development of the city. In 1850, the bell tower of the church St. Trinity, a new school is built in 1857, the distribution of newspapers and books was organized, in 1866 the city clock was installed, and so on.

In 1912, Bansko Municiaplity is included in Bulgaria.

In Bansko, the Old town is invariably part of the tourist tours

In Bansko, the Old town is one of the landmarks that attract the most tourists. In the Bulgarian Renaissance part architecture is a phenomenon in Bulgaria – it is specific to this region only. Because of the uncertain years during the Bulgarian Renaissance, the Bansko people have built their homes not only with regard to the comforts of the family, but also for its protection and security. 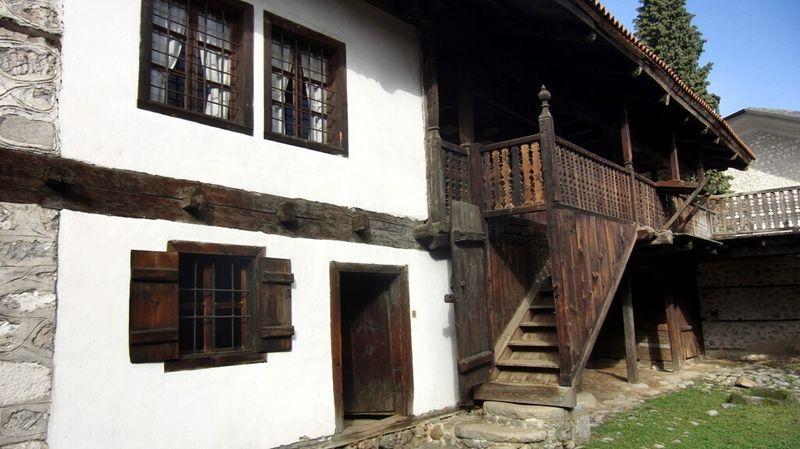 In Bansko, the Old town has preserved houses with rich decoration – painting and carving which are also specific. It follows the canons of the Bansko school and speaks about the aesthetic taste of the Bansko people and their pursuit of beauty. This decoration has turned some of the houses into works of art.

The houses are of a fortified type with very interesting interior layout. They are entirely made of stone and extremely thick walls and strong, mounted doors, with independent hiding places where one can spend time in defense. They also have several entrances and exits, the connections between the premises are complexly interwoven – clear to the family but confusing to outsiders. Usually there are secret corridors. The windows are small, fortified, and there are openings for embrasures. The ground floor consists of business premises – barns, workshops, warehouses, it was used to kneading for the big families, water was stored, etc.

The families lived on the second floor. There is a living room, a guest room, a  for women to spin, knit, sew, etc.

Thick walls were used, in which wardrobes and cupboards built in for clothes and utensils. The guest room was furnished with the finest furniture but was not used by the family, it was just for visits. From the inside, from the side facing the courtyard, there is a large veranda encircling the floor. Here is another specific only for Bansko type of house – the so-called “hut”. It is an inclined terrace that connects with the farming premises. The courtyard is protected by stone fences with strong gates.

The emblems of the Old Town of Bansko

In Bansko, the Old Town can be seen in groups. The complexly intertwined streets and crossroads have outlined groups of houses. Among them are the Dzhidzhev houses, Zlatevite houses, Koyuvi houses, Stefanovi houses, the series of houses which can be reached from the five branches of the intersection Gechkova razkrastnitsa. The architectural ensemble around the Holy Trinity church, the unique church that has entered the history of Bulgaria and the Balkans, is also very interesting.

All buildings in the Old town of Bansko have a specific architecture and decoration; among them there are masterpieces of the Bulgarian Renaissance art – Hadzhiruskova house, Sharenata, Velyanova house. 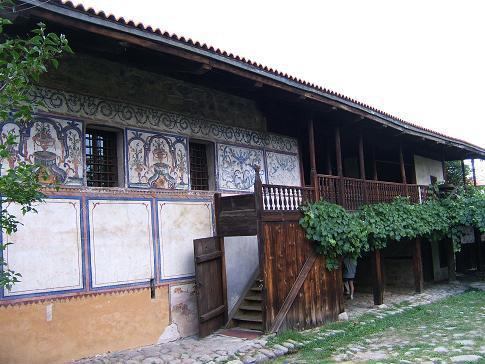 The most popular one is the Velyanova house. It has been turned into a museum and has been declared a nationally significant cultural monument in Bulgaria. In addition to the typical “fortress” construction, Velyanova House shows the visitors also the lifestyle of Bansko people during the Bulgarian Renaissance – furniture, arrangement, tools and appliances for the daily and seasonal work of the family. Its mural paintings and wood carvings in the decoration are unique to the art in our country.

Velyanova House was built in the 18th century. The church board donated it to master Velyan Ognev – a painter, carver and decorator who painted the iconostasis and naos of the Holy Trinity church. The distinctive artist, a representative of the Bansko School, has decorated several houses in the Old town of Bansko. Somewhere more complete – a wall or a room, somewhat more partial – cupboards, verandas, etc. According to written information, he worked in Thessaloniki area as well as in the city of Thessaloniki, he was a talented and popular artist and woodcarver.

In his own house – already donated by the church board, he unfolds his skills for dimensional decoration. The bright decoration actually vividly contrasts the “fortress” rigor of the architectural design. Velyan Ognev carved the ceilings, the veranda and decorated the facade. He also painted the house outside and inside – the living room, the Blue room, the guest room. The art includes geometric motifs, plant compositions, birds, branches, everyday landscapes of the life of Bansko people, bays, churches, fortresses.

The Pearl in the Old town of Bansko

In Bansko, the Old town has a pearl on an international scale – as architecture, as fine art, and as a symbol of Christianity. In the period 1833–1835, during the slavery, far from liberation, the Bansko people build a church that is the largest of the entire Balkans. This church dominated its first place up until Alexander Nevsky was built.

We are talking about the Holy Trinity church. The church surprises with its very entrance – next to the cross there is… a carved crescent in the granite. This shocking combination was, in fact, a far-sighted insurance that saved the church from demolition. 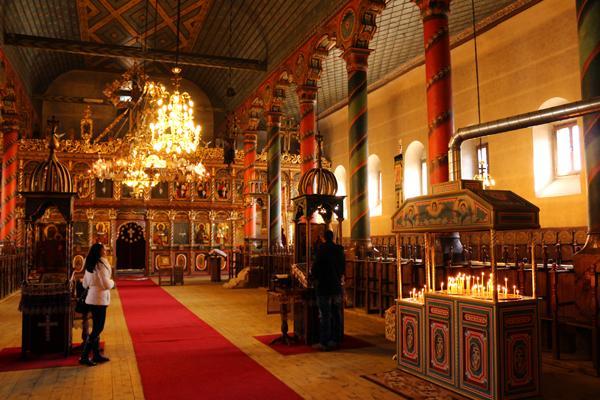 The construction leaders, the masters, and probably the whole population knew that they were building the temple in a much larger scale than allowed and the authorities sooner or later would find out about it. So it happened – because of the size, the authorities issued a decision to demolish and sent people accompanied by the zapties (Ottoman guards). But when they saw the crescent, even the agas kneeled, no one dared to raise their hands against the church and no one ever thought of demolition.

The appearance of the Holy Trinity churches does not indicate its size. Back then the Ottomans did not permit the Christians to build their temples in height, and they often dug them into the ground. The actual dimensions of this pseudo basilica with a nave and two aisles are 20 meters high from the floor to the arc, 44 meters in length and 22 meters in width. There are ground floors and balconies on 2 floors. Stone and white fir were used for the construction.

The church has three massive doors, numerous tall and arched windows. The altar, wall paintings, icons, throne, etc. are made by masters from the Bansko and Debar schools which are unique for Bulgaria.

The church was consecrated in 1837. In 1850, a 30-meter-high bell tower was raised. There are 4 bells in the tower. Some ten years later a town clock was built. Today, the church and the bell tower, along with the fenced wall, are our national monuments in the field of architecture and construction.