Balneotherapy and Spa in Bansko

SPA tourism in Bansko is highly developed, has a history and has already established its traditions. An example of SPA in Bansko with the maintenance of the leading international standards is the five-star Lucky Bansko – aparthotel SPA and relax. 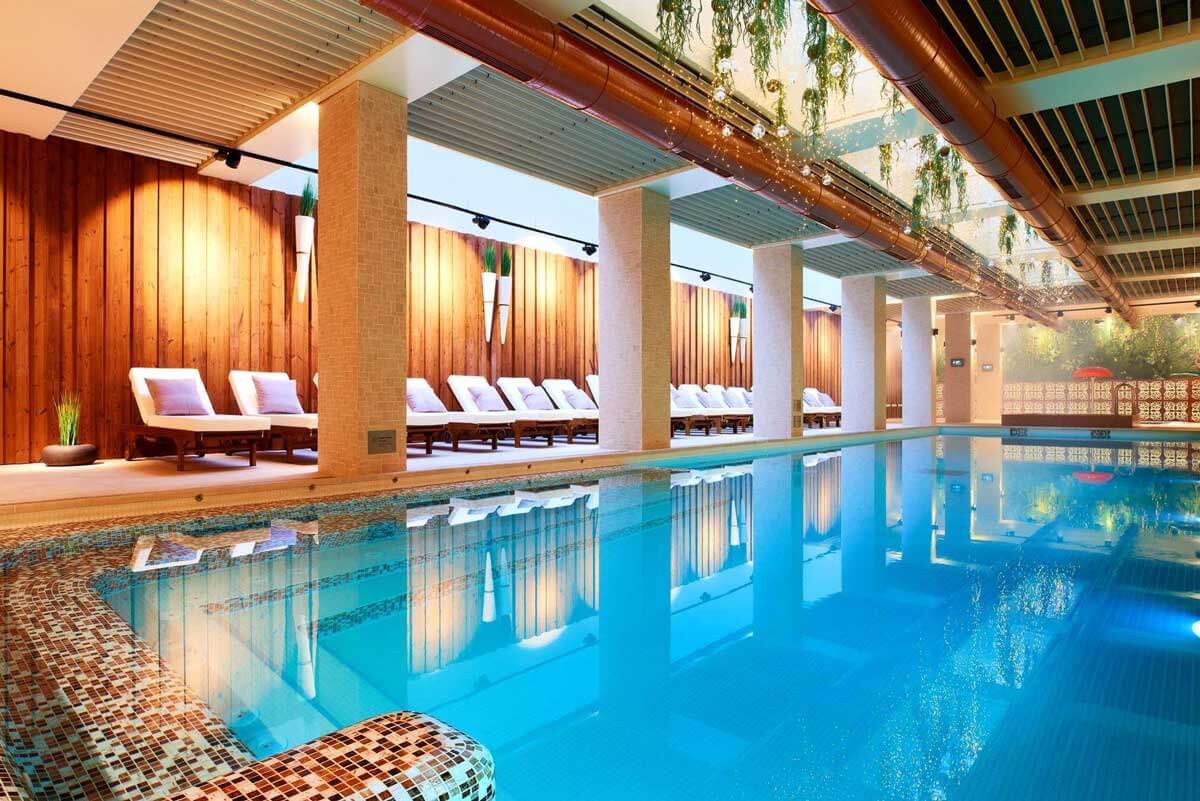 The new Bansko SPA center of the hotel is supermodern, here with the latest generation of equipment, SPA treatments and therapies that can be found in not more than twenty places in the world. Including the very popular Hollywood methods for rejuvenation and beautification based on nanotechnology.

In addition, all guests at the Apart hotel Lucky Bansko have free access to many services offered in the SPA – such as fitness, aromatic steam bath, ice room, contrast showers, bio pools and more.

The history of the SPA in Bansko and the region is related to balneotherapy. There are many mineral springs with healing power for a variety of diseases. It is enough to mention Banya village and Dobrinishte town – respectively 5 km and 6 km away from Bansko.

The mineral springs in the village of Banya are 75 and the healing power of the water here has been used for many years. The mineral beach in the village, for example, was discovered in 1967. Lumbago, discopathy, gynecological diseases, nerve inflammations, kidney and liver diseases and many others are treated there.

Similarly, Dobrinishte was a major balneological resort for the treatment of kidney-urologic diseases, gall-liver, gastrointestinal, etc.

In fact, balneotherapy is a good base and a logical springboard with the development of the private initiative in tourism to start SPA in Bansko. Because the two are essentially close. SPA is an abbreviation of a combination of words, which in Bulgarian mean “health through water” – exactly what is balneology.

If we have to be “precise”, the mineral springs in Dobrinishte have been used since the Thracians – there are discovered remains of a settlement. The Romans have “taken part” too – they found a Roman bath. But of course that’s just for curiosity.

Classic and modernity in SPA procedures

Here are all the classic restoration techniques known since antiquity, and at the same time the most modern methods are offered. The guests of Apart hotel Lucky Bansko SPA & Relax can experience the pleasure and the effect of the Roman massages with honey and milk, massages from ancient Indian medicine Ayurveda, Chinese energy massages with combined techniques, acupuncture, volcanic stones, and many others.

In addition, advanced equipment offers radio frequency therapies, nanotechnologies for deep penetration of curative serums in the skin, swirling, pearl and tangentor underwater massages. They can be used both individually and in different body combinations and the pleasure to be versatile. Separately there are specialized procedures for facial cosmetic effects – oxygen therapies, algae, anti-wrinkle and circular therapies, etc.

Part of the SPA treatments of the center are aimed at recovering from a number of mental disorders that have not developed into illness, but many people experience stress – anxiety, social phobias, personality disorders. 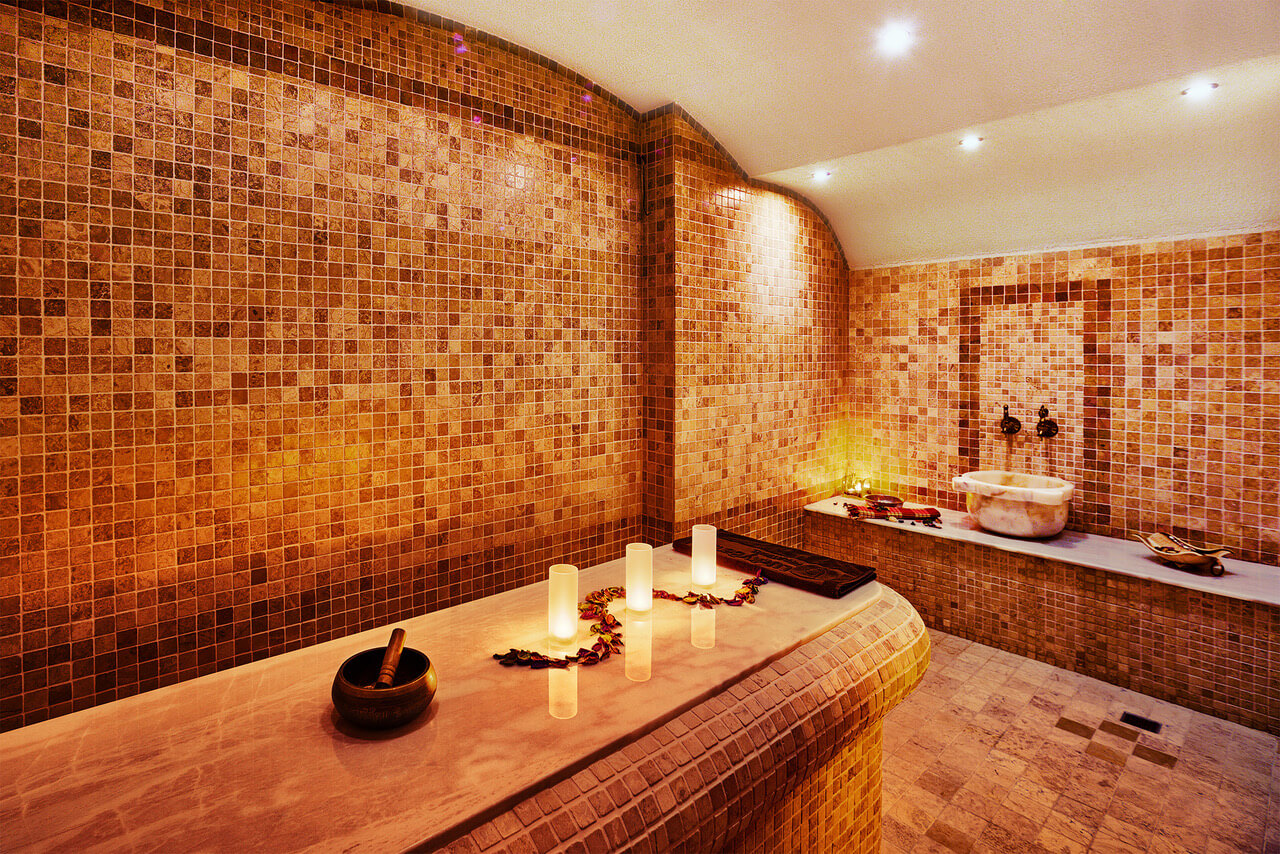 The modern methods and technologies at the forefront of the spa in Bansko and Bulgaria “have considered” even the clearing of the so-called electromagnetic smog. In our country, unlike Western Europe, we do not seem to be paying enough attention.

However, medical research suggests that electromagnetic smog accumulates, affects the nervous system and damages immunity, and may even trigger cardiovascular diseases, cancer, etc. This smog is caused by the increased use of mobile phones and computers in our everyday life, and in practice affects everyone.

SPA in Bansko – Relax from the Himalayas

The spa complex of Lucky Bansko SPA & Relax hotel includes different areas, but perhaps you have to start from the Relax Zone. It gives a unique result for complete SPA vacation and restoration. This is a relaxation room, and from the methods used, a 40-minute stay in it is equivalent to a four-hour walk in a pine forest. There is also a strong psycho-therapeutic impact.

The relaxation room uses the same effect of three types of therapies – the microparticles that emit Himalayan salt in prank, curative effects through colors, and music therapy. The overall result in the Relax Zone is also very good for recovery from accumulated overwork.

The relax zone in the SPA centre of Lucky Bansko is lined entirely with a natural product – the bricks are made of Himalayan salt. Here are used the healing methods of halo therapy, which is suitable for all ages and can be used in family. 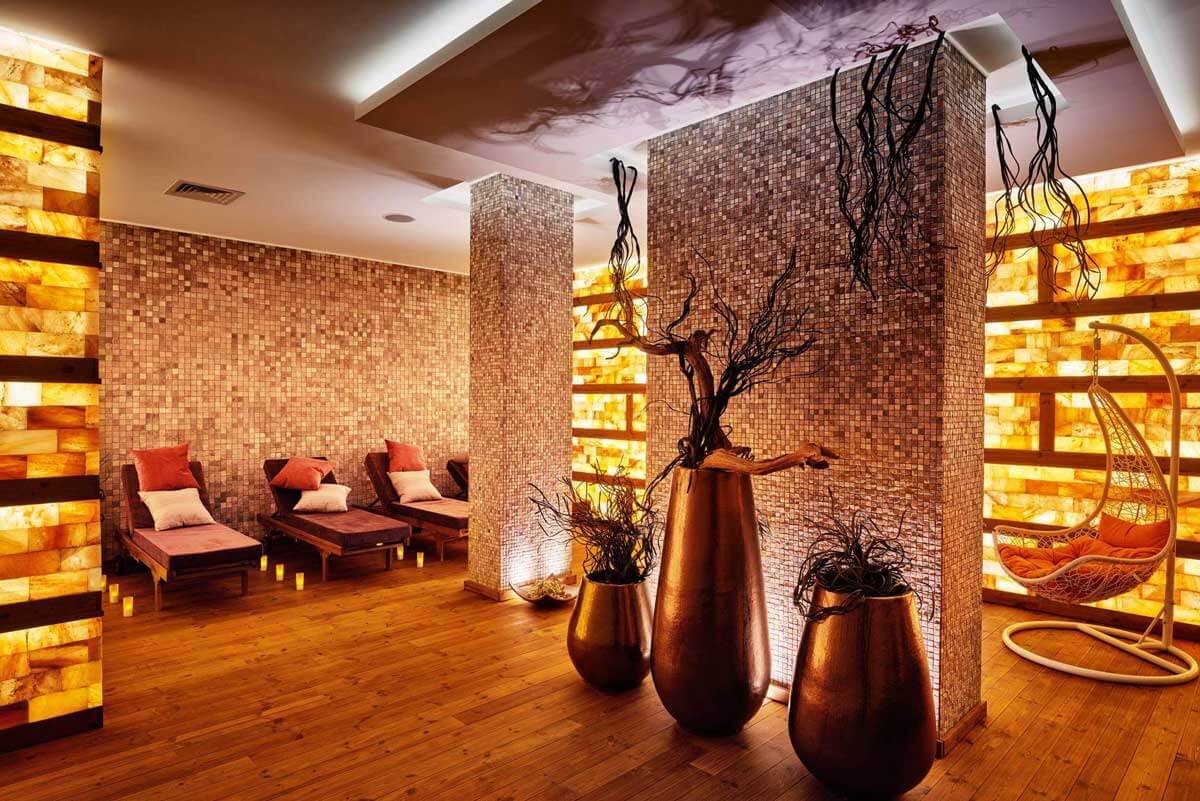 It has been shown that the micronized particles produced by the Himalayan salt produced by heating, by inhalation, have a beneficial effect on respiratory diseases such as sinuses, asthma, tobacco cough, chronic bronchitis, etc., and purifies the respiratory system.

They also act for the treatment of skin diseases and inflammation, help the body fight the burden of stress psyche. The healing power of halo therapy is complemented by a specially selected and dosed colored light, and soothing music that lowers the tension.

The effects of light and color have already been explored in detail – both for individual colors and shades, and for their combinations, and are widely applied in therapies.

The curative effect of music is also scientifically proven – to stabilize heartbeat, blood pressure, breathing. However, it was known in antiquity, the first written testimonies of this are Egyptian papyrus. In our country are known the words for Orpheus, which “calmed the beasts” with his music.

Alfa Delux-70 therapy bathtub for combined hydro-massage in the spa center of Lucky Bansko has already become a hit among the clients of SPA in Bansko. It has 25 programs, the latest generation and is the first in Bulgaria. Like her there are only 20 in the world and is very preferred. 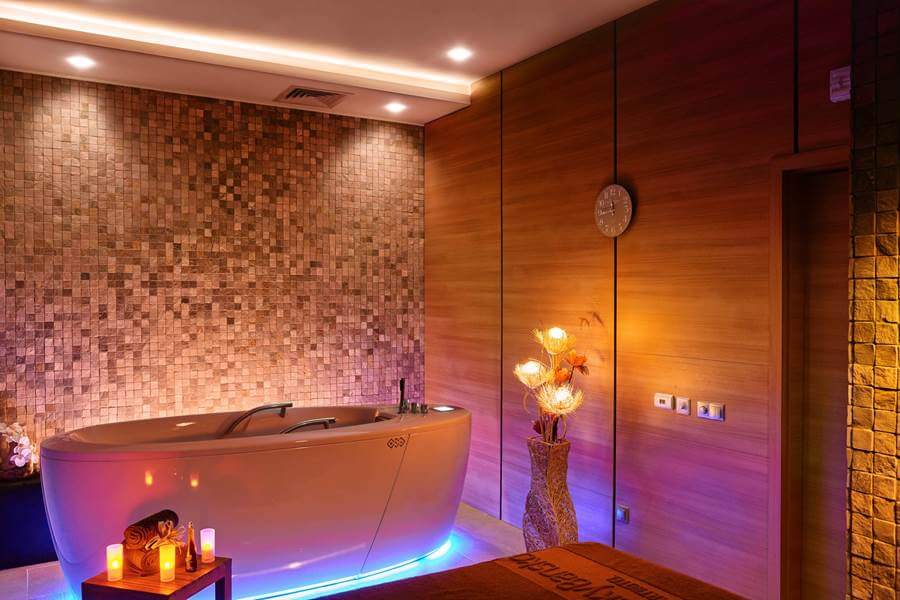 Essential moment in the spa in the SPA is that different combinations can be made by simultaneously hydromassaging steps, feet, seat, hands.

Massages in the tub can be pearls – bubbles, whirling – with water jets and underwater jets massages at the desired points and areas of the body. The sensations are very pleasant, the person relaxes, gets a sense of ease, tension falls, gets a tide of energy. Toning the nervous system improves sleep, stabilizing blood pressure.

The impact of hydro-massage with Alpha Delux-70 on the body is complete and multi-directional. It activates the whole organism, including metabolism, lymphatic circulation, etc.

In fact, water massages not only achieve relaxation but also treat illnesses. For example, they relieve the pain of arthritis, multiple sclerosis, and so on. They are enjoyable, they have virtually no contraindications.

According to the desired effect, they can combine the water temperature with the force and direction of the jets, water and minerals can be added to the water to cleanse and relax the skin.

Contrasting showers – changing hot and cold water, impact tonic, up to 30 minutes a day stay is enough to shake off stress.

Underwater point body massages of body and body areas are in practice a deep massage with a strong restorative effect. They are a good method of reducing cellulite because they “attack” painlessly the fat deposits. Regular hydromassage over time reduces cellulite, and the skin blemishes it causes will be erased.

The choice of Lucky Bansko for SPA in Bansko allows for a rejuvenating therapy, which has a very strong and rapid effect. Just because of this quick effect, it is very popular in Hollywood.

The procedure is carried out with an American apparatus called IntraSciences. It produces oxygen that directs the jet to deep penetration into the skin and carries special sera developed in nanotechnology.

Of course, everything is very fine and the result is almost immediately visible after the first manipulation. This device avoids redness, peeling and itching in the chemical peel.

For the SPA in Bansko only in Lucky Bansko there are bio pools, where the water is purified using the most modern technologies – with special ionization, with the use of ultraviolet light and electrolysis using sea salt. The swimming pools are for children and adults, have built-in hydrojet and also underwater music.

In the SPA center of Lucky Bansko there is also a pool with salts taken from the Dead Sea. They help to restore the skin, making it more elastic. 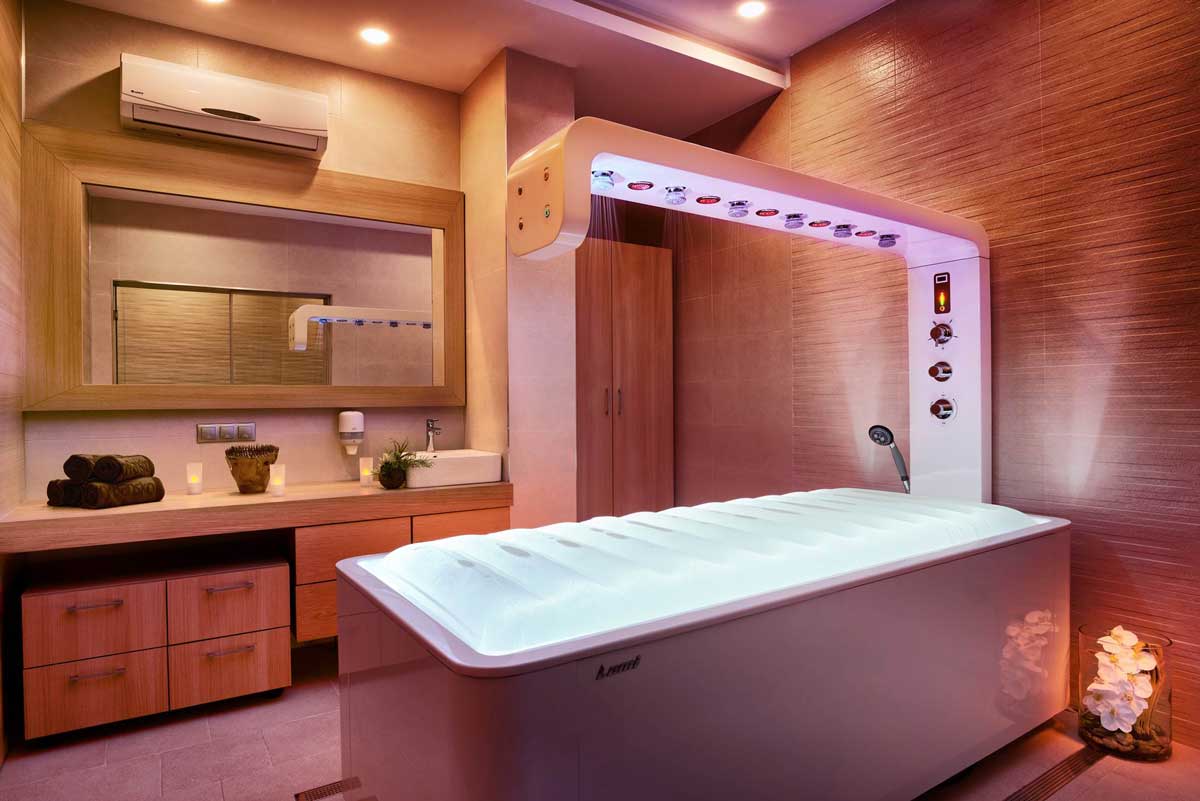 The interest in the Waterbed, combined with a Vichy shower and a steam bath, is also very interesting, and it mechanically makes swinging movements. Aemotio SPA is also ahead of SPA in Bansko and Bulgaria. It is custom-made in Italy specifically for the new relax center of the hotel and is only in the resort.

The effect is like water therapy, but a specific way and feelings. In addition, healing mud and micronized algae applications are also made. Chromotherapy is also used. The bed combines 6-color radiation, working relaxing on the psyche.

In addition, you can choose the SPA procedures with the shock bath, radio frequency sauna, Finnish saunas, Rasul and Hammam. Rasul is a soapy clay from Morocco and cleanses the skin, Hammam is an eastern ritual in a detox bath.