Bansko – a town of cultural monuments

As a resort Bansko offers numerous opportunities for tourism all year round – skiing; extreme sports – rafting, kayaking, off road tours, rock climbing, mountaineering; mountain hikes and picnics, hunting, fishing, excursions, horseback riding, etc. Along with all this, there is a well developed cultural tourism in Bansko.

There are so many interesting suggestions that the people who come for tourism in Bansko should compile a list of what they want to see according to their interests. The selection is extremely rich – over 140 cultural monuments are located in the area.

During excavations, a well preserved large Thracian fortress, sanctuaries, early Christian churches, a Byzantine fortress, etc. were discovered and available for the tourists to see.

Separately, there is a special museum for the history and ethnography of the region – the Radonova house, where the different periods are presented thematically. Thus, the ones who came for cultural tourism in Bansko can be immersed in a rich history, starting from the Thracians, passing through the Middle Ages and liberation fights, until the liberation of Bansko from Ottoman slavery in 1912.

Throguh various museums in Bansko, guests of the town can also “meet” with great personalities who were born, lived and created in the town and who have remained in history. A special memorial was built here dedicated to Paisii Hilendarski, and in the large and modern building there are unique expositions for the life and work of the author of “Slavonic-Bulgarian History”.

There are also museums of Neofit Rilski and Nikola Vaptsarov. At the museum complex, you can also see unique works from the Bansko school of painting and iconography, as well as the typical Bansko Bulgarian Renaissance house which has a very specific architecture and construction. There are many interesting churches in Bansko’s cultural tourism routes, one of which is even under UNESCOs protection as a World Heritage Site.

The visit of the museums is traditionally the first complex stop for tourism in Bansko. Here are the expositions about the history of the region and its ethnographic specifics, about important people, art and architecture. Tourists go on these tours of the specialized museums which are located in a common complex accompanied by versed tour guides. 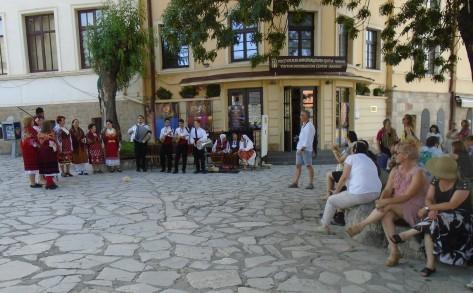 Thus visitors not only see and hear interesting things at the sites but they can also get comprehensive answers to their questions about the development of culture in the region.

Throughout the whole summer, museums can be combined with visits to the municipal Infocenter Bansko. Here you can get all sorts of reference information; however, tourists are particularly impressed by the performances of local song, music and dance folklore.

Many of the people who come to Bansko for cultural tourism take advantage of the opportunity to take classes at the Infocenter for folk dances and singing, playing a mandolin or bagpipe, etc. The duration of the classes is by request.

Demonstrations of old artistic crafts – carving, weaving, spinning, embroidery in specific ways, etc., are also very attractive for tourists – they are very entrances by them. Moreover, guests can get involved in the demonstrations and under the guidance of the masters they can create something themselves These demonstrations are from June to September, and exhibitions such as swimsuits, carved or embroidered icons, painting, woodworking, photography, abstract art, etc. are held together with them.

Among the exhibits, there are also quite unexpected for tourists works – such as puppets made with maize foliage leaves; decoration of bottles with waste materials, fabric souvenirs, etc. With all of this, the Infocenter also offers infotours to local cultural attractions, such as the ancient fortresses.

In Bansko, the “Holy Trinity” church must be visited

There is a church that is in the center of Bansko and is a national monument in terms of construction and architecture. At the same time, however, its history which impresses tourists is also amazing. We are talking about the Holy Trinity church. 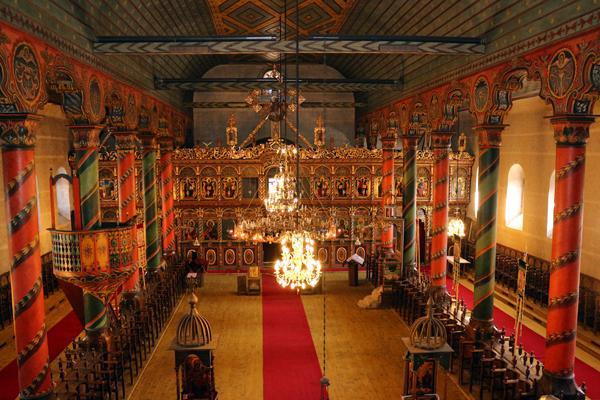 Above all, it has to be said that the population of the then little town of Bansko, while under Ottoman rule and enduring heavy bans of its faith, managed to build a huge church. Built between 1833 and 1835, it was the largest of the entire Balkan Peninsula.

Its dimensions – 44 meters long, 24 meters wide and 20 meters high until the arch, are impressive even today. They were unrivaled until the construction of Alexander Nevsky in the capital.

Bansko people have paid a dear price – hundreds of families have made donations, pinching and scraping; there are over 1,000 individual donations. And Lazar German, the mayor of that time, and the main organizer who paid with his life, was cruelly tortured in prison for the construction that was much larger than the one allowed.

The very church inside is quite impressive and beautiful, masters carvers and painters from the Bansko and Debar schools have worked on it. Their work makes the carved iconostasis, frescoes, icons and thrones unique.

Thus, the church, looking small from the outside, is actually beautiful and majestic The belfry – impressive with its 30-meters height, was build additionally in 1850 and the complex is one of the greatest achievements in the culture in Bulgaria during the Bulgarian Renaissance.

The plan of the building is by Dimitar Doyuv, master of Bansko who previously worked in the Aegean Sea regions, Cyprus and others. In Belgrade, for example, he worked on the Patriarchal Church.

The church in Bansko is of three parts, the walls are made of white marble blocks.. The reproduced biblical scenes are with bright colors, the faces are spirited and vibrant. Here shows the influence of Rome and Venice where Toma Vishanov, the founder of the Bansko School of Painting and Carving, studied.

Unique art: Jesus as an astronaut in a church from 1614!

There are many cultural tourism routes in Bansko, including the Dobarsko village which is some twenty kilometers away.

The church there is unique both as a building and as wall painting, it has been declared a World Heritage Site by UNESCO. Its uniqueness actually begins with its name – it only includes two saints in its name – one is Theodore Tyron and the other one is Theodore Stratelates. 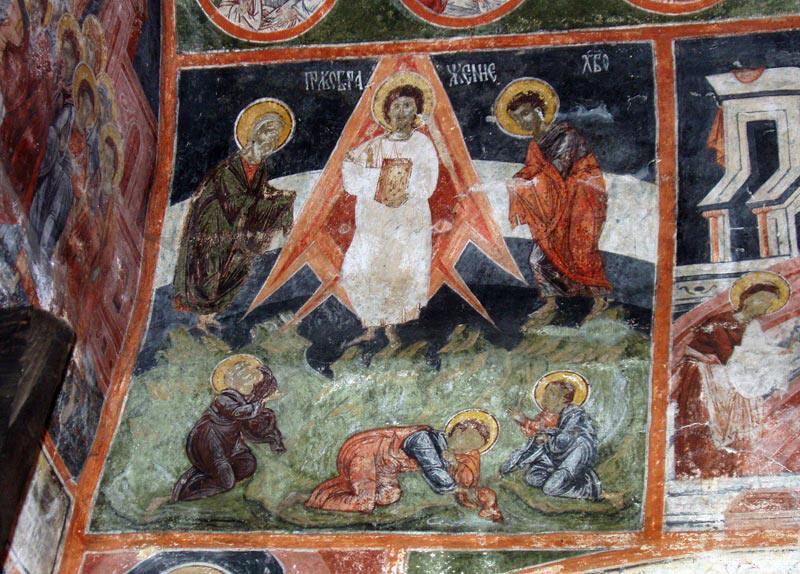 And more – it was built in the distant 1614, but so it is located and built in such a manner that it is like a… natural air conditioner. Without any secondary human interference, the room maintains throughout the year temperatures that maintain the wall paintings through the ages. And although they have never been restored and the Ottomans have made public baths here in the past, their colors are bright, fresh.

The length of the church is 8.37 meters, the width is 6.50 meters, the maximum height is 5.20 meters. Instead of the usual one-aisle space at that time, the visitor finds a complicated solution for a basilica with a nave and two aisles.

But this is the least of things compared to the wall painting – they strike you. First thing to impress is how many the images and the scenes there are painted. This little space is saturated with lines, there are 460 images, among which donors and builders. The saints are over 30, so many female images do not exist in any other church. It is also interesting that some of the saints warriors have waged helmets and battle axes as it was common for the armament in Western Europe.

Looking at the frescoes, one is amazed. In the “Transfiguration of the Lord,” Christ flies away as if in a space capsule that throws a fire like the one during a modern rocket launching. In the lower end, the atmosphere and the stratosphere are outlined. A similar image of God is also seen in the “Resurrection of God”. There Jesus descends to resurrect the dead from Hell, and on the way back he rises again like in a rocket.

Scientists still have no answers to all these “strangenesses” but the church is indeed unique, it is a world heritage and is worth it to be visit it.

The cultural tourism offers in Bansko also include excursions to remarkable places, which are an hour or two away.

Among them is the Rila Monastery which is the largest in Bulgaria, has a unique architecture and is under the auspices of UNESCO as Cultural Heritage of Humanity. The monastery dates back to the 10th century, it was reconstructed many times, even demolished and restored in its present form since the middle of the last century. 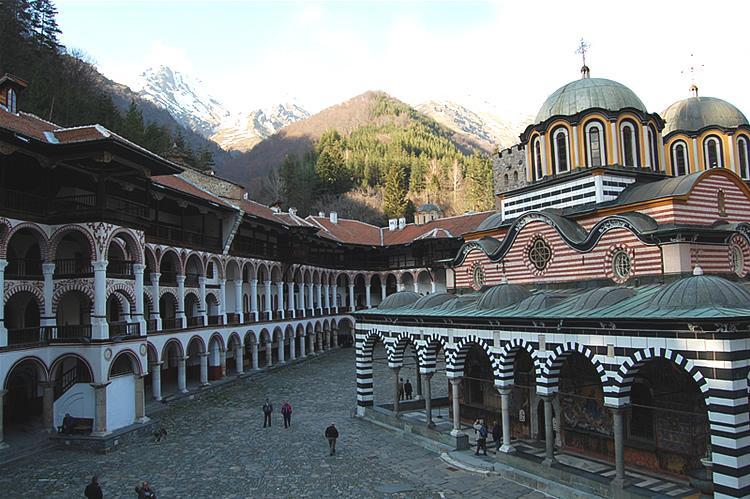 It includes religious and residential buildings as well as business buildings, with a total area of 8,800 square meters. Monastic cells are about 400. Its walls are made of stone, 24 meters tall and outside it looks like a fortress. Inside, however, there is a magnificent view of colonnades, arches, carved wooden verandas connected with wooden stairs, the main church, the impressive tower with a bell tower, and so on. Zahari Zograf painted the walls here; there are extremely valuable icons from the 14th to the 19th century.

Another offer in the cultural tourism routes in Bansko is the Rozhen Monastery, which is 6 km from Melnik. It dates back to the 13th century and was then one of the most important Orthodox centers in Bulgaria – it was beyond the authority of the bishopric, and it held a direct connection with the oecumenical patriarch. The visit to the monastery is also combined with visit of the town of Melnik, which is a historical and cultural reserve. Here are also the famous Melnik pyramids which are an exceptional natural phenomenon.

Excursions to the Kovachevitsa architectural and historical reserve are also organized from Bansko. In the 18th century, a building school was established here and the special Kovachevitsa houses were built. They are unique in appearance and construction, made of rough stone and wood, roofs of stone plates. The soldering was made with the softened soil – strong enough to preserve the buildings to this day. The village is mentioned for the first time in written documents from the 15th-16th centuries, it is believed to have been founded by migrants from Bansko and the village of Ribnovo.